Posted In: Arts & Entertainment, Theatre,   From Issue 635   By: Jamie Griffin 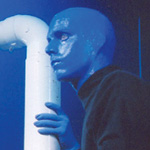 Ethereal.  Of another world.   That is one way to describe the Blue Man Group.  Formed in 1987 as a totally comprehensive creative experience it has become a franchise in its own right.  Boasting 2 albums, a DVD, a Live show and numerous theatrical appearances, the BMG has become one of the most sought after tickets in Las Vegas, also sprouting appearances in New York, Boston, L.A and soon Orlando.

Bringing their creative energy to Michigan, the Blue Man Group took to the stage at the Palace of Auburn Hills to display there How to Be a Megastar 2.0 Tour. Centering around 'Rock Star Movements' and a visual handbook for 'How to be a Rock Star' the group used ' instruments' made of PVC, smashed pianos, and drummed on oil barrels.

Paint, water and a secret but common food item are also used in the show.  Audience participation is a must for the BMG, so members of the audience are pulled up on stage during various points in the show. The vocal talents of Tracy Bonham are featured in the songs Up to the Roof as well as the Who song Baba O' Reilly.  Guitarist Mike Burns is featured on a cover of the Van Halen song Jump as well as a portion of the show dedicated to the topic of   how to tame wild soloing guitarists.

According to BMG the best way to do this is to put them in a chamber, fill it with gas and let them play their wild show boating tendencies until they pass out. The show also featured many of Blue Man Group signature movements such as Drumbone, Piano Smasher and Two Worlds.

One of the finer moments of this tour is the Donna Summer song I Feel Love.  Bonham comes to stage center in a dress made entirely of bands of light. The Blue Men wear light suits as well.  As she sings the lights dance to the rhythm of the music. This is just one of numerous effects used during the show.  There are also neon lights used on the men as well as television heads so the guys look like they are on TV.

For those of you skeptical of the act, the BMG is more than just 3 men dressed in blue, also featuring a full 8-piece band, 3 percussionists (including Clem Waldman, a member for 11 years), and a remarkable technical crew.

Mainly playing to audiences in New York City, Clem has been a staple for the BMGs last two tours.  A graduate of Musicians Institute in Los Angeles, Clem is an alum of Michigan State. He is also featured in the Complex Rock Tour DVD released in 2004.

The Blue Man Group How to be a Megastar tour 2.0 was a spectacular display of visual effects and audio dynamite.  Both stunning and creative the show is a must see for anyone who loves good music.  With plans to take a show to Tokyo in the future the group continues to bridge the cultural gap with their cosmically infused brand of entertainment.

Saginaw County Parks Open for a Bike or a Hike