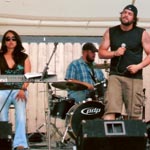 It was day unlike any other day and I never expected anything like this. Frankly, I don't know quite how to describe it. There was this sense of presence where there is no other presence. It was a sensation like poetry that fills that empty space between inhaling and exhaling that doesn't quite existŠ yet it does exist. It was a sound - a perfect note, the lost chord and the rough discordance of the damned.

The simplicity in the music belied the deep emotional tones underlying the words. And the poet cried out in anguish for this first step in the loss of original innocence and longing for his evoked companionŠhis poetry embraced the paradoxes of life - the body and the soul; the human and the divine.

The existential aloneness drives a compulsion to seek others with whom he is both attracted and repulsed.

But today the beatnik poet is inspired and his band is feeling his heat and the smoldering fire of the desert sand. He's preaching and proselytizing as if possessed. His body is pulsating and contorting in ancient rhythmic patterns, sensual yet oddly foreboding.

The naked masses worship at his feet and drink-in the unfettered passion of his words. He's paying tribute to the prophets that came before, the yellow suns of Nashville, singing about a Rusty Cage, evoking the ghost of Johnny Cash while channeling Morrison and revealing a chemical truth, the wisdom of the unfortunate and knowing.

He begins a dialectical conversation "You've Got to Find to Let it Go" and the masses respond by floating amongst the clouds that rest on the canyons, feeling lighter and lighter as they ascend - no one knows for sure if it's real or fantasy but they enjoy crystalline blue haze that overtakes them and realize deeply that it's ok to let go.

In an acid dream, the Dandiprats transform into dancing clowns and sing Death Cab for Cutie, knowing all the while that a Catholic school or any school for that matter is as vicious as Roman rule and that neither heaven nor hell can decide our fate. But the poet's world has changed and his life seems to drift in an unfilled prescription bottle and a quest that never seems to satisfy. He sings of loss and abandonment in a Travelogue that asks questions without answers.

Why can't words be shapes?

Why can't life be free?

The shaman morphs into a broken-hearted lover and laments his loss in a stream of consciousness about sobering tales, hollow heads, and things that nobody understands. He declares war on Spain and gives everything away - in a happy death. In this relationship he noticed a lot of bite marks on his tongue and wondered if his sorrow was real or only reflective.

After a slam poem, Honesty Elliot sings a lucid dream of existence about an old woman named after her mother. She knows that to believe in this living is a hard way to go. Bubbly Toes and a tribute to Tim Avram turned up the heat and mesmerized those who are paid witness to the poet's pain and glory.

But the poet knew he was running out of time. It was the moment of truth, the calm before the storm; the poet is ecstatic preaching his glorious hypnotic visions when the rapturous crowd turned unnaturally silent and very still. Suddenly the Zombies attacked killing everyone in a terrible holocaust of mindless passion, death spilling over into a desert pool of blood and tears.
Only the poet is left standing and still singing, as if invisible to the killers. The zombies stand silent, stunned by the odd symmetry of his poetry and the contours of his perfect human form.
The zombies are momentarily paralyzed by his body's beatific revelations but they slowly awaken and mill around the poet, emitting low rumbling sounds that become louder and higher, like a motor revving up.

They encircle the poet becoming more agitated and begin moving faster and faster. The poet is blissful, oblivious to the threatening din of the zombies. They overpower him and in a fit of molten sexual aggression, throw him to the ground and ravish every part of his body and being. His body erupts in spasms of pain and ecstasy but the passion proves too great and the zombies begin to devour the poet in a sexual frenzy, so complete and so violent that only his bones remain.

Spent and exhausted, the zombies fall into a deep sleep. But as the sun begins to rise in the sky and brings light to the day, the zombies begin to tremble and quake and in the poof of a nanosecond they are gone - turned to dust.

The wind picked up and blew the zombie dust to the four corners of the earth, leaving the poet's sacred bones to a few survivors.

Rumor has it that after months of prayer and contemplation, the disciples gradually reconstructed the poet, piece by piece - flesh, blood, bone and beard. They dressed him up and he toured the country reading a medley of his favorite songs and poems. Eventually he settled down to get his masters degree and taught an undergrad class at a major University in the Midwest.

Sometimes I sit and wonder if this deranged dappled dandiprat really did exist; is it in my head or on the wings of zombie dust?

I think I'll miss him.

Jim Brickman "The Magic of Christmas"