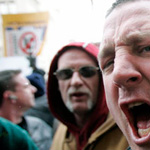 It wasn't assumed that any one person was sustainable on their own.  It sounds like the kind of place I'd like to live.  And, if I continue to meet the right friends and manage my time right, it's apparently the kind of place I live in right now.