Time Out With Tany 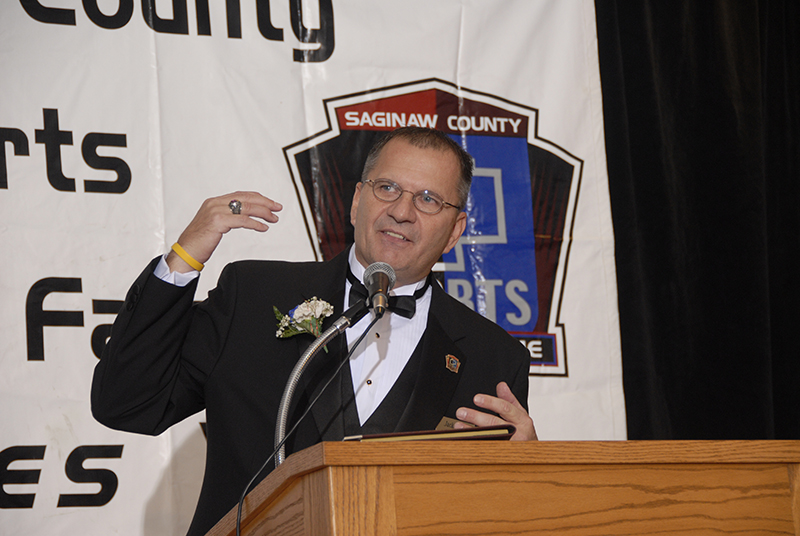 How many players from Michigan State University have been inducted into the Pro Football Hall of Fame?

Emory Jones, then-St. Louis Arena general manager, “Hockey players are like mules. They have no fear of punishment and no hope of reward.”

The late Don Meredith, “If Bud Grant and Tom Landry were in a personality contest, it would be a 0-0 draw.

When it comes to the Michigan High School Athletic Association football playoffs, shouldn’t all the teams be on equal footing (no pun intended)? Some teams get to play on all-turf fields while others play on natural grass, which is obviously subject to the elements. I’d really like to see all the teams play on natural grass until the number of teams gets pared down enough to where turf fields can be used. A number of high schools in Michigan have turf fields – including Freeland High School - as well as other local venues such as Saginaw Valley State University, Midland Stadium, Central Michigan University, Ithaca High School, Alma College, Northwood University and Atwood Stadium. Heck, they could even schedule multiple games at one site, spacing the starting times out (10 a.m., 1 p.m., 4 p.m. and 7 p.m.) for traffic to flow in and out. There’s nothing worse than watching a team who has relied on their speed all season long to get bogged down when a game is played on a muddy field.

Because of falling enrollments, more and more high school football teams are playing 8-man football instead of the traditional 11-man variety. The 11-man schools in the 8 Divisions play their respective state championship games at Ford Field in Detroit on November 23-34. The 8-man schools, however, are relegated to Northern Michigan University’s Superior Dome on November 17. Why shouldn’t those schools be able to play at Ford Field, too? Yes, I know that the schools are smaller, but they practice and play just as hard as the players of 11-man schools.

I love the game of baseball, but I just couldn’t stay up to watch the end of the third game of the World Series, the 18-inning battle between the Los Angeles Dodgers and the Boston Red Sox. I went to bed in the bottom of the 16th inning of the 7-hour, 20-minute marathon game. Game 3 took longer to play than the entire 1939 World Series, a four-game New York Yankees sweep over the Cincinnati Reds.

I went to Delta College the other day just as they were starting the Saginaw Valley League cross country championship meet. It was chilly out and I actually saw a girl running the course with a blanket wrapped around her. Never seen that before in my life.

The Detroit Pistons are off to a great start, losing their first game to the Boston Celtics after reeling off four wins to start the season. Leading the way is the one-two punch of Andre Drummond and Blake Griffin. They will eventually start to fade because they can’t possibly keep logging the minutes they have been.

If you get the chance to view a Detroit Pistons game at Little Caesars Arena and want to eat at one of the sit-down restaurants located inside the building, plan to go early. And by early, I mean hours early. It seems as if everybody has the same idea; grab a bite before the game and then just walk into the arena.

I just read a neat story about Patsy’s Italian Restaurant in the Fall edition of Italian American magazine. The restaurant, located at 236 West 56th Street in New York City, was owned by Pasquale “Patsy” Scognamillo, who emigrated from Bair, Italy, in 1928. People from all over the city come to Patsy’s to enjoy the “red sauce restaurant,” known for its tomato basil and marinara garlic sauces that were brought over from the old country. The popular restaurant was often frequented by Frank Sinatra. In fact, a portion of the second floor of the two-story building became Frank’s domain. After the performances, Sinatra would go to Patsy’s, entering by a separate entrance, and sit behind a curtain by the front window. When the New York Yankees won the World Series in 1977, Manager Billy Martin wanted to bring the whole team – the likes of which included Thurman Munson, Reggie Jackson, Catfish Hunter, and Lou Piniella – to celebrate on the second floor of Patsy’s. With two sections on that floor – Frank’s section by the window that held 35 people, and the general section in the back that held 50 people – Billy and the Yanks were seated in the back. Billy, of course, wanted to sit in the section typically reserved for Frank and his crew. Sinatra, a lifelong Dodger fan since back when the team hailed from Brooklyn, didn’t want anything to do with the Yankees’ team. But Billy barged in and Frank graciously accommodated all of them, meeting with them individually, each Yankee player going behind the curtain one at a time as if going into Confession. For the rest of the night, the Yankees team was buzzing, celebrating their World Series championship and meeting Frank Sinatra. After a couple more hours, Frank pulled the curtain back, waved to the team, and left through his side door. At the end of the night Billy asked the owner to bring him the check. The owner hesitated for a second. “I’m sorry, I can’t do that,” he told Billy. “Frank picked it up for you.”

The Los Angeles Dodgers had the duo of Dennis Eckersley and Kirk Gibson throw (and catch) the first pitch before Game 4 of the World Series on Saturday in LA. Sure, there’s a bevy of former Dodgers such as Don Sutton, Steve Garvey, Fernando Valenzuela or Orel Hershiser that they could have asked, but Eckersley and Gibson helped Dodger fans relive the 30th anniversary of Gibby’s infamous World Series home run against Eck – one of the greatest dingers in baseball history. Huge class act by Eckersley that he would partake in the first pitch ceremony. In the end, Eck got the last laugh. He’s in the National Baseball Hall of Fame and Gibson will never be a HOF member.

Speaking of Orel “Bulldog” Hershiser, who had an impressive 18-year career in Major League Baseball and rolled up over 200 victories, he played Little League Baseball in the Southfield area with Craig Monahan, a longtime history teacher/coach at Swan Valley High School.

Whatever happened to Brandon Inge?