The Blues Fusion: Experience Takes it Back to the Basics 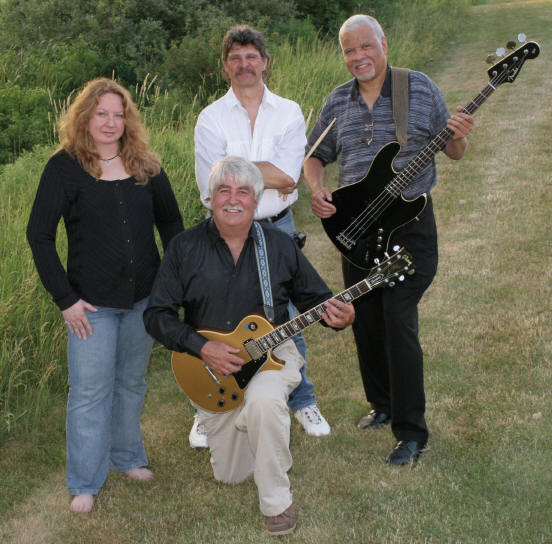 One of the great attributes of music is that you're never too old (or young) to explore its magic and mysteries.
A perfect case in point is the recent formation of Blues Fusion, consisting of auto mechanic & owner of Nationwide Service Center, Bill Crofton on guitar; bassist by night and dentist by day, Dr. Jack Nash; drummer Bill Kasper; and the band's latest addition, Donna Rousseau Taylor on vocals.

Many people know Bill Crofton as the man that tunes cars, but few realize his history when it comes to tuning a guitar.

"I started playing guitar at age nine in the early '60s," reflects Bill, "actually pre-Beatle era. A guy down the street had a 'Play Guitar with The Ventures' album, and we wore the thing out. We learned the lead, rhythm and bass to every song on it, so by the time The Beatles came out and there was a garage band on every corner. But we were many years ahead of everyone else."

"Chuck Berry was a huge influence for me, along with The Beach Boys, Muddy Waters, B.B. King and Albert King," continues Bill. "The first time I heard Albert Collins and Johnny Winter my life was changed forever. Then came Hendrix, Cream, Santana and that's where my head was at."

"On the scene at that time in Saginaw you had The Bossmen, The Paupers, Cherry Slush, The Motivators, who all dominated the local arena. They were all a couple years older and then they were all gone. We had a good two year run opening for some big name acts."

"In fact, I remember opening for Ted Nugent once when he had The Amboy Dukes," relates Crofton. "He had this wall of Fender amplifiers all strung together and before I left the stage during our last song, I sat the guitar on the stage and turned all the knobs up to ten as I walked off - feedback ringing in the arena. Ted looked at me and said, 'Nice move.'

So what caused Bill to put down the guitar and give it a rest for close to two decades?

"Around 1969 the Bubble Gum era arrived and we got beat at a couple Battle of the Bands by people who really played some lame stuff," he explains. " I quit playing, sold my gear, and didn't touch a guitar for fifteen years."

"Then in the early '80s I ran across Bruce Crawley, Larry McCray, Bob Logan, Ricky Moon and a host of other good players and started sitting in. We would have some incredible jam sessions at Molly McGuire's and The Hickory Rib Inn," notes Bill.

"I bumped into Ron Tucker at a picnic table in Caseville one late drunk night and jammed until the wee hours with a group of people and three months later was asked to do a job with Ron's band. I figured, 'sure', I'll do one last farewell tour. However that one last tour lasted eight years.  I quit again for three years and last October we all got together just to fool around in the basement. Thus was The Blues Fusion born".

Donna Rousseau Taylor  (the newest member of the group) first became interested in music in high school and choir.  "I started singing in a band when I snuck into the Banana Tree Tavern under age and saw a group performing with a girl singer and thought, 'I can do that!'" she laughs.

Subsequently the rhythm guitar player quit and started one with Donna, called Loose Change.  Following this came a stint with Sass and finally her involvement with The Amazing Pups before moving to Washington, D.C. in 1988.
"We broke up because we had to keep traveling farther and farther to get gigs, thanks to Karaoke and drunk driving laws. Plus the guys were getting married and starting families."

Donna lived in DC for 16 years working for a Real Estate Management and Development Company and eventually met her husband there. "Unfortunately he died of lung cancer three years ago, which is why I moved back here. Family is more important than a career."

As for Dr. Jack Nash, he first got interested in music in grade school on the violin, then in the early sixties when he started guitar lessons.

"One of the guitar players in my first group called The Heart Beats was much better than me, so they put me on the bass, and there I sat," jokes Jack.

After jamming with many local players 'back in the day', Jack ended up with the Ron & Joe Lopez in a group called Weston, performing the Catholic School circuit. "We got to be the warm-up band once for Meatloaf before he made it big time and did a lot of the old Battle of the Bands and the Y-A-Go G."

"Bill and I have known each other for years and finally we really decided to put something together," reflects Jack. "I'm more into a blues/jazz mode, but with the Fusion we do a little bit of everything."

"I needed Bill to push me onto stage again, and I'll always be grateful for that. It was 'baptism by fire'. Some bands never get out of the basement and I'm glad I am not still there."

Donna hooked up with Blues Fusion when Bill heard about her from a member of the Kix Band.
"I was looking to sing again," she says, "so they had me come and sing a few songs. I wasn't sure they liked what they hard at first because I'm not very dramatic, nor a real comfortable entertainer. I'm just a singer, but am working on the other stuff."

Each band is defined by their chemistry, and seeing as Blues Fusion is still experimenting with material and the boundaries of their interactivity, what does each member feel makes it a unique or distinct entity?

"The chemistry is all about the fact we have a good mix of people," states Jack. "I think what makes us unique is that we incorporate a blues/rock mix with a female singer. Blues is all about vocals and feel. Plus Bill really gets into his guitar playing."

" Bob Kasper, our drummer, and I try to stay in the pocket and let Bill do his thing. Then when Donna jumps in with her vocals, everything seems to fall into place. There's just a lot of dynamics going on."
"As one of my friends would say, 'If the chili ain't right, it don't taste good'. With music I can't say it tastes good, but in this case it feels good."

"We've evolved in many ways," notes Jack. "Everyone can feel each other on stage. The song selections have more feel and the rhythm section is stronger, as well as the vocals."

"Bill and I had to get our rusty fingers moving faster since we both had not been on stage for awhile, but Blues Fusion is always looking forward and not back."

"I see a big improvement in the sound of the group already, which is only natural," notes Donna. "I might have to buy a keyboard and start playing, but don't really want to, because then it becomes work!"

Given the unique nature of the group, is it difficult to accommodate the demands of a band with each member's professional and personal life?

"Yes, it can be difficult to balance," admits Donna. "I work full time as a nurse aide at Bay Regional and am in the Delta College Nursing Program, so between work, class, homework and playing, I have a very full schedule. But I love being able to sing again. It's my comfort zone and really fills me up. I met a very special man at Delta who is also in the RN program. He's given me great love and healing and also fills me up."

"I have more time to play with the band now since my children are grown and out of the house," explains Jack. "I would have never tried the band with my kids at home. I like to spend time with my family, so I would have been pulled into too many directions."

"My wife, Jan, is very supportive of the band because she knows I love to play," continues Jack. "With my professional life, I try to balance things. Everyone has hobbies and music is mine. Other professionals love to golf for hours, fly planes, go sailing, or hunt; but music is my favorite pastime at this point in my life. Still, my day job always comes first. Music is my hobby. Dentistry is my profession and will always come first."

In terms of the potential and growth of the group, each member harbors different impressions. "Life lessons have taught me to live in the moment," responds Donna. "I have to enjoy every day and what it has to offer. I don't look too far ahead and don't look behind, so I don't really know where we are heading, as long as we keep having fun and pleasing the crowd. If someone wants us to learn a song we will do our best to learn and play it. The audience is number one."

"I envision the group growing tighter musically," states Jack. "We all love to play. Once we get our demo CD and promotional packages done, we should be doing some summer Blues concerts next year and maybe warm-up some big acts. Who knows? You can't tell what's coming up around the corner."

"There are three people I would really like to thank for helping me become more musically knowledgeable," concludes Jack. "First is John Martin, a great person as well as an excellent bass guitar instructor; Paul Yacobellis, who showed me some more bas tricks and also is a good instructor; and Ron Lopez, who was in my band at one time."

"When I performed in my younger days I was just hitting notes and did not know any music theory. These three guys have pointed me in the right direction as far as music theory goes.

"Without those guys, I would just be hitting notes and most of them would probably be wrong."