The Big Band Beat of The Baytones 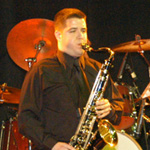 For the second year in a row, The Baytones secured the nod as Best Big Jazz Band among music lovers and fans throughout the region; and got to show off how incredibly wonderful, dynamic and expressive a 16-piece jazz band can be when they performed their spirited set at the 2010 RMA’s

The Baytones have been together since 1996 and actually began as two groups – the all-female band known as Opus Ten and the Bob Olsen Orchestra. The girls were missing a few key players and Olsen passed away, so it turned out to be very beneficial for both groups to merge.

“Our first gig was the Saginaw Juneteenth Festival put on by Lula Briggs-Gallaway,” explains Baytone Leslie Campbell. “This was at Morley Plaza in June, 1996. We usually rehearse the four weeks prior to a show, which depends upon how many ‘ringers’ we have to bring in, and which part they are playing. We’ve done mainly private parites in the area but lately have picked up more public appearances such as Saginaw PRIDE’S Friday Night Live series, the Bay City Fireworks Festival, and were also doing a few shows over at the Hancock Theatre.”

“Being selected was a pleasure and a surprise,” concludes Leslie. “You are never sure how people are going to vote, or what some of the readers actually consider to be a ‘big band’. How we differ from a lot of the area combos is that we are not a combo. We always go in with the full 16-pieces because the sound of the arrangements would suffer if I chopped the band up.”

“There are many good small jazz groups in the area and al ot of them play originals. We have not played originals, as there are so many great Big Band songs that have lasting power. Think In the Mood, Sing Sing Sing, Satin Doll, and of course we play new big band tunes as well. We performed a couple at the Awards Ceremony, Cutting Edge and Thaditude. “

“A lot of jazz groups live strictly by featuring long ad-lib sections; but we play the notes on the page, with short ad-lib passages. The melody rules for us.”

“We are looking to find a few Summer festivals to play this year and are the featured guest artists for the Bay Area Summer Music Festival in August in Bay City. This is a free program for young people to participate in. They have a jazz band, concert band, and orchestra. It will be fun. We will actually be recording a new ‘jazz feel’ CD at the end of May. We have an older, live CD of Ballroom Dance favorites out right now, available from myself or at Records & Tapes Galore on Court St. in Saginaw.