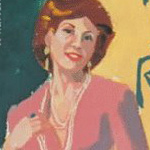 The Sisters Rosensweig is a play by Wendy Wasserstein that first opened in April 1992 at the Seattle Repertory Theatre. It was applauded by critics for breaking theatrical ground because of the way it concentrates on a non-traditional cast of three middle-aged women and the arc of their lives.

The play appeared off-Broadway in a Lincoln Center Theatre production and is now being presented locally by The Bay City Players in a production directed by Joanne Berry that will run from March 4-6 and March 10-13th.

As a director, Berry finds the play a compelling piece of work.

“This is a comedy that focuses on three very different middle-aged sisters,” explains Berry. “Sara, the oldest, is an international banker celebrating her 54th birthday at her London home. Her two younger sisters join her and we learn that each has conflicts, ambitions and identity concerns. They grew up in a traditional New York Jewish family, but only one of them has retained that Jewish identity. Their mother has recently passed away and she was a major influence on them, which comes into play as they grapple with questions about their lives. Is love elusive for a career woman? Are there possibilities for a romance and a career? Where will their professional pursuits lead them?”

“These are intelligent, professional women, each unorthodox in her own way,” continues Berry. “Sara is twice divorced with a teen-age daughter who is trying to assert her own independence. Sara’s ‘gentleman friend’ is a stuffy Brit. The evening of her birthday she meets a smart, charming Jewish widower who would like to know her better.”

“The other sister, Gorgeous, which is the name her father gave her, lives what appears to be the life of a traditional Jewish housewife and mother, while balancing a career as a radio advice columnist. Pfeni, the youngest, travels the world writing books. She has been carrying on a romance with a bisexual theatre director.”

“Each woman, including the daughter, has to come to terms with her relationships and ambitions in this modern world.”

Insofar as this play was written and first presented back in 1992, has the expanse of 20-years dated it in any way; and what are some of the themes and qualities that Joanne feel makes it still relevant today?

“Although the play is 20 years old, women still face the issues confronted in this play,” she reflects. “The problems of women in 2011 are remarkably similar to those of 1992 when the play debuted. The choices women struggle with today are similar to those the women of the Baby Boomer generation faced.”

What personality traits was Joanne looking for in the actors that reflect the qualities of character in the script that each sister represents?

“The cast of this play is remarkable,” states Joanne. “They bring intelligence, a willingness to work hard, and an interest in exploring their characters and sharing insights with each other. All but one are experienced actors.”

“The sisters are played by Susan Meade (Sara) of Bay City, Debbie Lake (Gorgeous) of Saginaw, Debra Monroe (Pfeni) of Bay City; and Shelby Avery of Midland is Sara’s daughter, Tess.  Ryan Lisius, a Delta College student, plays her boyfriend. Paul Oslund (Geoffrey) is from Midland and is the only newcomer. He brings a great deal of spirit to his role and is very eager to learn. He plays Pfeni’s lover. John Tanner (Mervyn) of Bay City plays the very likeable Jewish widower who is attracted to Sarah. And Kerry Berry (Nicholas Pym) also of Bay City plays her British gentleman friend.”

Because the play is held together by the richly woven dialogue of these sisters pushing against their own boundaries in order to define themselves, they do come to a resolution in their struggles. Despite the absence of any traditional action, the sisters manage to transform both themselves and their lives in the course of one evening.

Another significant feature of this work is its ability to capture and make real several social and political issues that gave shape to the late part of the 1980s – the fall of the Soviet Union, Reaganomics, and the plight of the homeless, to name a few.

Indeed, events discussed in the work are often a reflection of what the author experienced in her own travels, first in Eastern Europe, before the fall of the Soviet Union; and in Poland, in a town where she could see no evidence of her Jewish ancestry.

The play was admired by critics for its humor and insight and it managed to earn both an Outer Critics Circle Award and a Tony Award nomination for best play in 1993.

Tickets are available by calling 989-893-5555 or going to baycityplayers.com.