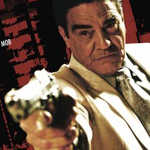 Two years ago Saginaw was buzzing with activity and busy cleaning up splattered ketchup all over town while the full-length feature film Street Boss was being filmed at 30 various locations, ranging from taverns, restaurants, courtrooms, and homes, throughout our fair city.

It was one year ago that the World Premier of Street Boss occurred at The Temple Theatre, amidst much hope and anticipation for this first feature film by Bierlein Entertainment, co-written and starring Executive Producer Mark Bierlein.        Adapted from Kerby’s book, With Honor & Purpose, which chronicles portions of former FBI agent Phil Kerby’s stint in Saginaw back in the late 1960s and early 1970s during the volatile period when he was working at bringing down one of Detroit’s most notorious mobsters, Tony Giaccalone; the film featured Nick Turturro and Vincente Pastore from The Sopranos, and following its world premier one year ago, was poised for national release.

Growing up in Saginaw in the early ‘70s, there were few who were not touched in one way or another by many of the characters populating Street Boss. Indeed, I can remember one morning when former restaurant owner Johnny Ryan phoned my father, a noted attorney in town, to inform him that his restaurant on Bay Road, which had been sold several months earlier to some of the characters chronicled in Kerby’s book, had burned to the ground the prior evening.

So one year following the World Premier, what exactly has transpired with Street Boss?  Recently I spoke briefly with Director and co-writer Lance Kawas about the post-release genesis of the film.

“Apart from the two feature film awards, Street Boss received a nomination for Best Director and has also secured distribution. It will be available at all Blockbuster Video, I-Tunes, and NetFlix on July 6th,” notes Kawas. “Not bad for our first film and done all on our own.”

“Currently we are in our second week of shooting our second feature, which is called Restitution. We have Mena Suvari, Tom Arnold, C. Thomas Howell all starring next to Mark Bierlein in this action/romance noire film.”

With shooting going on in Detroit, the basic synopsis of Restitution concerns a true crime writer investigating a small town murder spree and uncovering a devastating truth that changes the town forever.