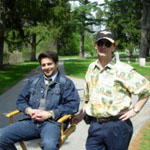 Back in the late '60s and early 1970s, Philip Kerby was a young FBI agent stationed in Saginaw at a volatile time in history when student riots and Watergate were fueling the headlines more than the dealings of local mobsters.  The first Godfather movie had just been released in 1972 and The Sopranos were decades away from re-defining TV on the newly established format of HBO and 'pay television'.

Ten years ago Kerby wrote a memoir of his career with the FBI, entitled 'With Honor & Purpose', which chronicled - in specific detail - the story of how the FBI brought down one of Detroit's most notorious mobsters, Tony Giacalone.

Now the tri-cities are buzzing as film crews have descended upon Saginaw & Midland with shooting for Street Boss - a new independent film based upon portions of Kerby's book - bringing genuine Hollywood type excitement to many familiar mid-Michigan locations.

Financed by Bierlein Entertainment and with a script co-written by Executive Producer Mark Bierlein, Kerby, and Director Lance Kawas, Street Boss is but the latest in a litany of films being shot in Michigan, as part of an economic stimulus package that grants up to 40 percent tax incentives to the film industry.

Kawas is a Dearborn resident who also wrote and directed Silent Scream up in Harbor Springs, Michigan, which is currently available from Lions' Gate.

With a 40-man crew busily filming at various homes, restaurants, taverns, and courtrooms throughout Saginaw & Midland, the 25-day shoot will span over 30 locations.

Recently I had the opportunity to chat with Director Lance Kawas during a 3 PM to 3 AM shoot on Saginaw's Superior Street, one location utilized being the home of Saginaw city councilman Paul Virciglio.

Review: Please explain your background - how long have you been involved with film, what other films have you directed, and how did you get involved with Street Boss?

Kawas: I have a banking degree from University of Michigan. Screenwriting and Directing is self-taught and was a hobby. Nine years ago I started this hard and merciless road by leaving my job to make films. Since then I wrote 30 scripts, sold 4, optioned 2, adapted 1, and made my first film SILENT SCREAM in 2005. I also earned 19 National screenplay awards. I met Phil Kerby five years ago and he then introduced me to Mark Bierlein. We started putting together Street Boss three years ago. Now we are filming it.

Review:  Phil Kerby's book covers a lot of great episodes and characters relating to the state of organized crime back in the late '60s and early '70s.  I've read that you only plan on covering a small percentage of the book and that the script will be loosely based on characters & activities in the book.  Without giving away the plot, what is your primary focus with Street Boss and how many of the characters within the book are being translated over to the screen?

Kawas: The focus of Street Boss is to portray one major character and his eventual downfall. We only cover one chapter of the book. It will be fictionalized for dramatic purposes, and also be set in a modern time line. We also will portray a couple other characters from the book but focus mainly on that one chapter.

Review:  Who are the primary actors in the film and what is their background?

Kawas: We have Nick Turturro - he has been in many films including World Trade Center and Chuck and Larry. We also have Vincent Pastore from The SopranosŠ Robert Gallo, Reggie Gaskins, Ed Carnivale, all of who have worked in film and TV. We are still casting for another big name which will be undisclosed at this time.

Review:  What do you feel is the most challenging component, or components, in translating a saga like Street Boss to the screen?

Kawas: Street Boss is an independent film and not a studio film. We are hoping to make it look and feel like a studio film within the confines of our limited budget. Viewers must understand that. Also, what I want to make is a small indie film that could become a cult classic. It is hard to translate that on the screen because of the funds that we have available, and because of the time we have to do it in. This is a 25-day shoot, not a 2-month shoot.

Review:  How do you feel Street Boss will be distinguishable from other  'epic' Mob films like 'Goodfellas', The Godfather, and of course, The
Sopranos - all of which are strongly branded in the public consciousness?

Kawas: Look at it this way; we are the underdogs going into the ring with the big boys. All we need is your faith and support that sometimes the unexpected may happen.

We also have a great crew, cool cast, and the city of Saginaw, not to mention the County of Midland behind us.  What else can one ask for to go out and face Goliath?

Also, the way I am shooting it and the story told is different in that I bring to it elements not yet seen in dark films like the above. Just go watch it when it comes out and you'll see.

Review:  When is the film slated for release and will it enjoy major distribution?

Kawas: It is our hope that the film will be ready by the end of the year. It will do the festival route and it's my hope that a major distributor will pick it up.  This type of film may go limited theatrical and based on the public's perception, it may go to wider release or to Blockbuster Video.

Review:  Have you spoken or consulted with any of the characters in Kerby's book that are still living?

Kawas: I have not spoken with them because of time constraint. I would have loved to. All the info is from the book and as I said much has been fictionalized.

Review:  What do you think it is about gangster films that the movie-going public finds so appealing and intriguing?

Kawas: It is dramatic, bloody, heroic, insane, daring, and in a way, darkly comedic, suspenseful, full of fascinating characters, and is seductive to the human psyche.
Who does not want to experience that, from behind the screen, that is?  Look at it this way, why do most men like James Bond?

Review: Any other thoughts or comments?

Kawas: The people of Saginaw are fantastic and the County of Midland has been great. I also want to thank Phil and Debby Kerby for allowing me to be part of their family.