Penetrating the Dharma and the Awakening of a Great Band 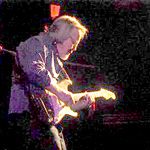 Ray Goodman is one of the unsung heroes of the Michigan Rock era of the late sixties and early seventies. He joined SRC in 1969 for their last great album Traveler's Tale. The band was so far ahead of the curve in terms of business and technology. They built their own equipment and made PA's for other artists. They constructed their own recording studio and promoted Rock Festivals in Saugatuck and Petoskey.

Along the way Goodman had stints with Mitch Ryder & Detroit, Dick Wagner, Cub Koda, and Paul Randolph. It seems that Goodman has flexed his ample chops with just about every notable player in the Midwest and beyond.

Ray worked on commercials and various sessions including work with Gladys Knight and Detroit featuring Rusty Day. He played guitar on Luther Allison's Bad News is Coming, the last LP recorded at Motown before it shut down.

He was a staff guitarist for Holland, Dozier & Holland after they left Motown and created the Invictus label. Goodman toured with such Invictus acts as the Chairmen of the Board and Ruth Copeland. They would open for Sly & the Family Stone and Three Dog Night as well as other great seventies acts.

Goodman is a seasoned minstrel who's experienced great success and lifelong friendships as well as gut wrenching disappointments. He is a seeker that never gives up his quest to divine the perfect note. Goodman is a tough businessman who has a sentimental side that forgives the past and embraces the future. He is responsible for making the SRC Reunion happen - wonderful thing.

What is the story around you joining SRC?

After the original Detroit Wheels broke up I was playing in a band called Blueberry Jam with Johnny Bee Badanjek. He was trying to get a record deal for us but by 1969 it seemed unlikely that the band would be signed. When I read that SRC was looking for a guitar player I contacted Alan Sussman at Pioneer Recording who arranged an audition for me through John Rhys who was their producer at the time.

How did you influence the SRC sound on Traveler's Tale?

My playing was a bit more informed by Motown and Stax Volt than your average garage rocker of the day. I think that the Funk Brothers were my Beatles at the time. Prior to working with Johnny Bee I'd been playing with an R&B band called the "Famous Brothers" with Bobby Franklin and Hubie Crawford. We used to play for teen shows hosted by Ernie Duram at the world famous 20 Grand nightclub in Detroit. I got to see some of the greats from the golden age of soul music there. It was a real musical and cultural education for this little white kid from the suburbs and I'm thankful for it to this day.

Did your technique evolve during your tenure with SRC?

Yes, and I hope it still is, I don't ever want to stop growing and improving as a musician.

What are you favorite moments on Traveler's Tale? Favorite songs?

The writing and recording process comes to mind, as well as working with Bob Boury, the amazing classical composer from U of M who orchestrated the Offering. As far as favorites, I'd have to include Midnight Fever and Street Without a Name.

Was it a good fit?

That depends on whom you ask. When I first joined it was supposed to be both me and Gary as a guitar duo. When he left it put me in the position of having to emulate all of those amazing signature lines and pioneering use of feedback that he had come up with on the first two records. A daunting task indeed, controversy was inevitable because my style of playing was totally different.

Where did all those gorgeous 3 part harmonies come from? Who sang? Was there a designation of lead tenor, second tenor and so on?

As far as I can remember, Glenn and Scott did the vocal arrangements and everyone sang except me. I got to stay in the control room and run the machines, an early education in engineering that still serves me to this day. I believe that everyone sang the same part and then overdubbed the next note ala Crosby Stills and Nash.

How would you describe SRC music?

Classically based and harmonically sophisticated, very different for the time.

How did SRC's technical skills i.e. making their own equipment affect the sound? Who was the engineering genius in the band?

Not everyone knows that SRC built PA's that were among the largest in the world at that time. Kurt Andrews was the man behind that and went on to do sound at a lot of major concerts and festivals. Glenn did most of the engineering on the albums.

Did you have a communal life in SRC?

Well, we all lived in the same house but I wouldn't call it a commune, it was more of an economic arrangement...

How would you rate Scott as a singer? Frontman?

Scott was wonderful at both and also as a lyricist, (he is a poet you know). He was absolutely fearless on stage and his live performances were one of the driving forces behind our popularity.

How would you characterize your guitar work in general? with SRC? Mitch Ryder? Dick Wagner?

Well, you're always your own worst critic, but I've always tried to do my best in any musical situation. I've never phoned in a performance in my life, ever! Hopefully, my best performance is still ahead of me...

Did you have a mentor? Who influenced your guitar style?

Chet Atkins said, "be a nice guy and steal from the best". Starting with him, there's a very long list of people who have let me stand on their shoulders when I was too little to see over the wall so to speak. I've learned from everybody, particularly all of the greats in Blues, R&B and Jazz. I got my first slide lesson from Mike Bloomfield...

What is your favorite story about your time in SRC and your career?

Our manager Pete Andrews was an astute businessman. We produced and financed many concerts that featured some of the biggest stars of the day; including a festival in Northern Michigan where I saw Muddy Waters perform live for the first time. Career wise, I'd have to say opening the show for Gary Moore's Still Got The Blues Tour in 1990. We did 78 dates in Europe and I became close friends with Albert Collins who is one of my heroes.

In the reorganized SRC are band decisions reached by consensus or synthesis (accommodating multiple truths and a middle path)?

That's a very Zen like question and I'm tempted to give you a philosophical answer, but in reality, SRC (or most any other band) isn't a Democracy, most business decisions are discussed between Scott, Glenn and myself.

How are you utilizing the three-guitar attack? Do you and Gary trade off leads? What is s Steve Lyman's role?

The secret to using 3 guitars is to lay back and play as little as possible; otherwise it can really muddy the waters so to speak. Gary and I share solos and are working out some guitar harmonies, but he's doing the lion's share of the signature guitar lines because he played them on the original recordings. Steve Lyman is a great rhythm guitarist and back-up singer - he has a near photographic memory of the arrangements and parts that most of us had long forgotten after 40 years, this is something that came in very handy during our long and brutal rehearsals.

Scott and Glenn put together the original set list and it kind of evolved during rehearsals.

Are you using and modern techno or unusual instrumentation?

No, a lot of our gear is older than many of the people in the audience. I saw a marching band in New Delhi many years ago that included a bunch of guys playing their own armpits - talk about unusual instrumentation! Both Scott and Glenn steadfastly oppose that idea despite my best efforts; ditto my suggestion that we should all wear matching Speedos - there's just no pleasing some people...

Back in the day SRC produced several "Rock Festivals", the most prominent being Saugatuck and Petoskey. Can you talk about your efforts in putting it together, memories of the bands and the spirit of the crowd? Was it well attended?

The only festival that SRC produced during my tenure was at Petoskey in 1969 and I had little to do with it as far as the planning, etc. It was most memorable to me because Muddy Waters was on the show and it was the first time I saw him live. A truly life changing experience for me! I recall that we had some electrical issues because the power company was lowering the voltage to the grid causing an intentional rolling brown out - devil's music corrupting their kids and all that sort of stuff. This was 1969 after all and a lot of people weren't ready for the vast changes that were sweeping through society at the time. I think it was our least successful festival - we had to rush back to A2 to secure the loan to buy our first used 8 track tape machine from Motown before our banker saw the losses on the books.

Can you recall your most memorable and satisfying performance with SRC?

The Black Arts Festival at Olympia Stadium on October 31 1969. We rocked as did Arthur Brown, The Frost, Savage Grace, The Stooges, The Amboy Dukes, Bob Seger, The Pleasure Seekers, Alice Cooper, Teegarden and Van Winkle, Dr. Timothy Leary and many others who I can't recall. Tickets were a whole five dollars!

Any surprises as you put together the SRC Reunion shows?

Too many to mention and they've mostly been pleasant ones; it's been a gratifying experience for us all. We can't wait to play Saginaw again!

The SRC Reunion will be taking place at White's Bar on Saturday, July 30th. Advance tickets are available at White's.