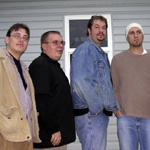 They are an amalgamation of former the former Muddy Gumbo, Gone Daddy Gone, and the Beertones, and they have just received voter's choice as Best Blues Band in the 21st Annual Review Music Awards.

Local music fans may be familiar with front man Scott Baker in his other role as a long time area entertainment reporter (Review Magazine, Bay City Times) and music enthusiast. Scott's music has been featured on Review This Radio Dot Com (www.reviewthisradio.com), and his various projects have opened for many national acts, most recently appearing with national folk artist Jen Cass in 2006.

He is a member of the Mid-Michigan Song Writer's Guild, and has been a board member of the Saginaw-Bay Area Blues Society for over four years. He took a moment to answer some questions about the band, and some of his solo endeavors:

Review: Tell me about the young Scott Baker, ala gangly kid years, vs. the adult player of today.

Baker: I was a music kid, listening to everything I could grasp. From Neil Young to Genesis, Allman Brothers to Iron Maiden, you know what I mean? It was the beginning. As for now, I think as you get older you develop whatever it is your passion is and hone in on it. For me, it's a very rootsy, organic style of music. I am a huge fan of jazz and blues, on top of singer/songwriter music. I love artists that tend to blend those elements with rock and world focus.

Review: What things have changed?

Baker: The older you get the better listener you are and the better player you can become. And my voice developed pretty well over the past decade, which is always another instrument to work at and develop. Sometimes a regular listener doesn't hear that.

Review: Who or what has influenced you?

Review: What drives you to perform, and how to you feel that drive has affected you as a person?

Baker: I always enjoyed playing my tenor sax at school and in performance and it seemed like a bit of a rush...no matter how young I was. Somehow, writing my own material seems to make me want to share it with everyone else. I guess having that outlet drives me to perform, since songwriting is my main thing, is getting my songs heard. As a person it opens your ears and eyes up to others experiences and gives you a very unique perspective that only a few can share.

Review: Who are some of the most compelling people you have met in your tenure as an entertainment writer and performer?

Baker: I have been very blessed in the fact that I have met or talked with a lot of my musical heroes, either as a music journalist or as a musician. Getting to know what makes them tick or quickly getting to know your boundaries with them, allowed me to read people pretty quick. Some of my 'I can't believe moments' includes meeting Dr. John, Warren Haynes, Mikey Hart, Paul Rodgers, Faruq Z. Bey, Steve Winwood, Jon Anderson, (and so many more I forget).

Review: Tell me about the high points and low points in Scott Baker's life, and what effect have they had on you on a personal level?

Baker: There are many high points and very few lows, but as a person, everyone equals out in one way or another. It's how you continue to strive toward those high points or goals, (to) be the best you can be on the way there; That makes the difference.

Review: Tell me your feelings about the band, and how the relationship works:

Baker: The guys--John Grundner-- he has been playing around since the late '60s in this area. He also can drum, bass, whatever you can dream up. And (he's) one hell of a songwriter. John brings depth and knowledge--the "been there does that "type of the thing to the band. ŠHis experience can quickly smooth the music out.

Pete Socha--he is the new guy on the scene, the bassist from the basement that is blown away by everything we do, as we are blown away by why he hasn't been playing out regularly before this. His energy is a huge push.

Timmy Scott--he's the guy that's been with me since the halfway point of Muddy Gumbo. He reads me better than anyone in the group, knows my music and brings that fun-loving, corny sensibility that drummers have...well--you know what I mean! He grows much in the same way I do--always getting better. And he's like a rock. I can count on him.

Review: What's next for Scott??

Baker: New album, 'Between Seasons' due out in July, my first foray into the solo music making. Then I hope we play on...and on....and on.

The album is also meant to be a 'listen' and although it can be a 'fast-food' MP3 song thing for some people, when you hear it together it will make best sense. I am from the last generation of vinyl listeners and I love to pick up the music, hold it, read it, and hear it from beginning to end. I know there are quite a few of us still out there, but the kids nowadays don't really have that concept. I love it when I am asked about old bands and records. I hope one day to see parents that have music loving children, allow them to understand why it is cool to grab a .99 cent MP3, but it is even more cool to listen to the CD all the way through from beginning to end. It's art and culture and everything the artist had for that time. Not just a song because it's easy to grab or download... But my motto is, if you listen to music, you've already got a smile on your face.