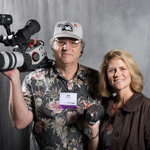 Saginaw native Jennifer Douglas is a 1982 graduate of Douglas MacArthur High School (now Heritage High) and is the writer, co-producer and cinematographer for an important new documentary entitled Save KLSD, which addresses the increasing lack of local, diverse radio in America due to media consolidation and its impact on democracy.

Drawing upon her career in news and media production, Douglas also interviews such contemporary broadcast icons as Phil Donahue, Rachel Maddow, Ed Schultz and Bill Moyers about the disturbing way Congress has essentially given away public airwaves for nothing to large corporate entities that in turn filter, manufacture, and marginalize the news away from the true forces that shape and define our national landscape, along with the tenor of the political dialogues that drive it.

As the owner, publisher & editor of an independent locally oriented news publication for the past 33 years, I had much to discuss with Douglas about her new documentary, which will show at The Riverside Saginaw Film Festival on Friday, November 9th at 6 PM at The Saginaw Club and also on Sunday, Nov. 11th at 3 PM at Pit & Balcony.

Review: Please tell me a bit about your own background in terms of how you got interested in filmmaking and the genesis of this project

Jenny Douglas: I have been involved with media production -- mainly news -- since writing on the newspaper at Douglas MacArthur High School (now Heritage High; us DMHS grads hope the former school name is used), then at University of Michigan and in TV and radio in Washington, D.C. (at CNN and other broadcasters). I have also worked on video and Internet production projects and marketing/communications jobs in New York City and in San Diego.

For the "Save KLSD" film, when the news broke that the progressive talk format was threatened, I went to the first protest and started shooting video, because it is just my natural tendency to document and report on what I find interesting, not knowing how I would use the footage.

Almost immediately, I somehow hooked up with producer Jon Monday who was also shooting there and planning to make a video. Then we embarked on the almost 5-year journey to make the film, creating a company (Save KLSD LLC) and cramming the filmmaking into lives full of paid work and family. It was a lot more work than we initially thought, but we are ecstatic that the film is finally done and getting screened live and on television nationally (34 million subscribers on DirectTV and DISH satellite TV networks via the Link TV channel, which will soon air on KCET-TV as part of a merger, reaching another 5 million viewers).

Review: In many ways, the growth of mega-corporate media consolidation also mirrors that of the banking industry insofar as a decade ago there would be two dozen major banking entities for consumers to choose from, whereas today there exist about six major concerns. What do you feel are the biggest reasons for the decline of independent broadcast outlets in local & regional markets?

Douglas: Go see "Save KLSD" and find out! Ok, here's the spoiler -- a major factor was the Telecommunications Act of 1996, which drastically deregulated radio/TV ownership, allowing an unlimited number of stations to be owned by one company.  Previously, 40 stations was the national limit.

That allowed companies like Clear Channel to buy up local and regional radio companies, substituting homogenized, syndicated shows and hosts for the previous content that was responsive to local audiences. There are other factors, including the abolishment of the Fairness Doctrine that promoted the airing of diverse opinions and the growth of extreme talk shows that seem to thrive on appealing to people's base fears and emotions. Rush Limbaugh is the best example of that. Advertisers used to love shows like that, but they are seeing a backlash among listeners when talk hosts take things too far.

Review: Just as the growth of the Internet has affected many divergent industries - especially those affecting communication & information delivery - do you feel the explosion of Internet radio is also a pivotal reason for the decline of independent terrestrial radio stations? Ancillary question: Is the growth of satellite & independent Internet radio an antidote to the expansion of mega-corporate broadcasting entities?

Douglas: I believe Internet and other up-and-coming radio technologies create more interest in media. Radio, like print, needs to evolve. Many of the big news websites are based on traditional print media. Content is still king. The Internet is a platform for that content. There is no reason why old-fashioned terrestrial radio can't thrive. However, the FCC needs to enforce its mandate to ensure local, competitive radio with diverse content.

The radio airwaves are owned by the public and are a limited national resource, like national parks, and must be accountable to the people. We give broadcast licenses to companies for free and they can feel free to make profits and in return, they are supposed to adhere to a minimum commitment to the public interest. What does that mean? The public interest surely means covering local and national elections in fair, in-depth ways.

Yes, the growth you mentioned is a good force for democratizing media, we just need to make sure all populations can access that coverage. Not everyone has the money or skills to use those high-tech mediums.  The new Low Power FM law also will create more radio stations with content for small geographic areas at a low cost.

Review: What for you were the most revealing discoveries that you made while researching and advancing the realization of this documentary?

Douglas: What is revealing is that media/corporate/government nexus and the craven pursuit to them to feed each other's needs. How can politicians objectively deal with the media when they are dependent on media to cover their campaigns and air their ads?

How can the media cover important news of the day when they are beholden to politicians and their own corporate owners?  I think we need a PR campaign to raise awareness about the power of media and the need to make it more responsive, and nonprofit groups like Common Cause and Free Press are the ones to do it. Common Cause has sponsored screenings of the film in Michigan (e.g. Ann Arbor in August) and all over California. The former FCC Commissioner Michael Copps (who appears in Save KLSD) now heads up a media reform initiative at Common Cause, so we are hopeful.

Review: What was the most challenging component involved with pulling this documentary together?

Douglas: Finding the time to finish it. Editing a film and getting it truly final just takes a long, long time. Also, we were fortunate to have dozens of small donors who made the film possible from a financial perspective. We didn't pay ourselves for our time, but at least some of our production costs were covered by our donors, mainly people we didn't know who are just interested in the issue of media reform.

Review: How many festivals have you shown this film at and is there any interest in major distribution of the film at this juncture?

Douglas: We haven't really pursued film festivals. I learned of the Saginaw Riverside Film Festival and because of my local connection, figured I would contact the organizers and see if they were interested.  I did go to the Traverse City Film Festival this year and stuck a DVD of "Save KLSD" into the hands of Michael Moore when he was walking by.

National distribution for a documentary, especially one that critiques media and political structures in America, is tough. Now if fearless documentarians like Mr. Moore or Robert Greenwald showed interest in Save KLSD that could spur things along. Or perhaps they can make a bigger budget documentary about media consolidation and get distribution. We just want the issues to be out there for discussion.

Review: I recently read an article about how younger demographics do not think or feel about music the same way as older generations and rarely engage in traditional forms of broadcast delivery, but prefer downloading tracks from I-Tunes and creating their own play lists on I-pods, which obviously affects market shares at all levels of the game. What are your thoughts on this and how do you feel independent radio can survive in the current landscape?

Douglas: My kids are only 7 and 5 years old so I don't have an accurate read on that quite yet on a personal level. They don't even know who Katy Perry is.  However, yes, the traditional ways we receive (and now, interact with) media is changing quickly. Again, I just hope we have responsiveness to local, diverse creative content, whether it is music, political talk, art, and the whole spectrum. We will always need a way to find the gems in the mountain of content created every year. There is still a need for reviewers or filters who have the talent and time to sift through all of the content that is created and select choice items for the public to experience.

Review: Feel free to add any additional thoughts on any topic that I may not have touched upon.

Douglas: Yes, I believe the best news and educational programming is independent of advertising and other influences as much as possible and should be non-profit, PBS and NPR are good examples of that. The Voice of San Diego website is another example. We need sustainable models for developing thoughtful, even entertaining, content that informs citizens to live and thrive in a complex world.

Also, Save KLSD can be purchased on Amazon.com or Save KLSD. We donate $1 for each sale to groups working on media reform.