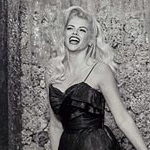 I'm not sure there are a lot of deep and profound things to say about Anna Nicole. I wonder if Marilyn was a cartoon joke like Anna in the sense that through the years an urban legend grew at how cool she was, until she became a legend greater than any woman ever on the planet, and became the symbol of female sexuality. I wonderŠwas Marilyn as dense and lightheaded as Anna?

The fact Anna's death occurred so close to Valentine's Day is ironic, as is the tendency to wax philosophical on the depth behind bountiful busts of pulchritude so plentiful!  Actually, Anna was a lot like Marilyn in one sense - both became icons of their respective generations that allowed their legend to re-define whatever sense of reality was left in their lives. They were both sad in the sense they let image and artifice get in the way of the stuff that grounds us to the earth, which should serve as a warning sign for the way femininity is shaped, packaged, and sold in contemporary America. Now, she is floating above us.


I really didn't know what I felt when I first heard about Anna Nicole Smith, but after the first flush or two of news coverage, I began to feel sad as if I were grieving the loss of someone I knew or at least could relate to.

She was a tortured soul, no doubt, as she seemed to willingly subject herself to one media humiliation after another - from her gruesome marriage to a wealthy octogenarian (I really love him, really) to an almost cruel self parody in her short-lived reality show. She certainly parlayed her media-induced celebrity into mega-fame and some degree of fortune, though she wasn't admired or despised in the same way as Paris or Zsa Zsa - maybe because she was not the sleek and fine-tuned Mercedes; no, she was the little engine that could. But could what? She wasn't exactly an actress or a socialite. What could she do?  I agree with both you guys - she could look like her soul mate and inspiration - Marilyn Monroe, only without the talent. With a hero like that, Anna was sure placing her destiny in the wicked hands of fate. Leave your mark and die young, girl - just look good doin' it.

I wonder if Elton John would do yet another re-write of Candle in the Wind. . But a more fitting tribute may be We Go Down Together by The Decemberists, an alternative band from Portland, Oregon. The song captures Anna's fragile hold on life and her fragmented identity. Is she a pawn to those that exploit her or is she a cunning vixen with no real allegiance to anyone but herself or both? Transposed around Anna Nicole's troubled life, it seems the perfect metaphor about her divided self, for her suffering:

And Oh My Love, My Love
We Both Go down together