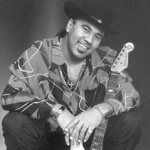 Blues man Ronnie Baker Brooks is starting to get familiar with the Tri-cities. On Saturday, April 21, Brooks will return to headline the State Theatre in Bay City where he sold an audience with his playing, vocals, and showmanship, just four years ago opening for Larry McCray. One of the finest local original acts, Maybe August, will open the evening.

"I've just been traveling’ man," said Brooks on his journey since his last visit. I released my latest record, The Torch, almost eight months ago and we put that out and I've been traveling around the country, around the world. I just got back from Iceland yesterday. And before that I was in the studio producing Eddy Clearwater's record. So I've been pretty busy."

Brooks's last visit to the area was at the Frankenmuth Brewery in 2005, but with the release of The Torch, the guitar master has kicked it up a notch. "I'm trying to get out and get people to know about the record," he said. "Trying to get out there and support it and continue the buzz."

With The Torch having been somewhat of a hit for Brooks, accolades have started to file in.

Nominated for Best Contemporary Blues Artist / Male, by the Blues Music Association, with honors to be presented in May '07, nominated for Best Blues CD by the Chicago Music Awards and nominated for a 2006 Blues Critics' Award in the category of Best Traditional Blues or Blues-Rock Album, Brooks has been taking it all in stride.

Along with brother Wayne Baker Brooks and legendary bluesman father Lonnie Brooks, Ronnie is looking forward to eventually doing an album with his dad.

"Hopefully we'll be doing something with my dad pretty soon, trying to get in the studio and if not that I will definitely be doing something for myself, either out there touring or putting another record together. I really just am enjoying the vibe I am getting from working with Eddy and for him to allow me to do his record, because he could have anybody he wants."

For the State Theatre, Brooks wants everyone to know he is looking forward at coming back for another visit.

"Come out to the show and I'll be ready to have a great time and if you can't make it and you want to buy the CD, you can get it at my website, ronniebakerbrooks.com. I'm trying to do the best I can do.  Got to keep that snowball rolling."