Posted In: Politics, National, Opinion,   From Issue 751   By: Matt deHeus 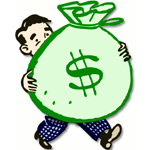 You just wonder what a good hippie like Ben Franklin would think about all that.