Reinventing the Musical Parables of GODSPELL 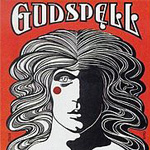