after a dismal start in which NCC trailed 27-11 at halftime, Raedy led a second half comeback, scoring 22 of his game high 26 points.... 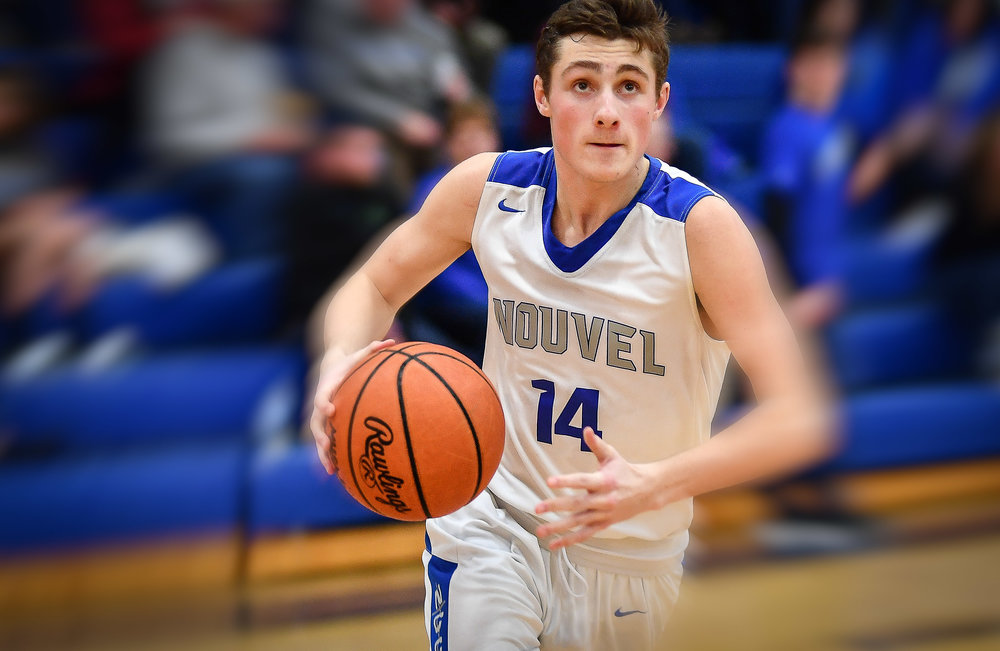 Saginaw Township:
In a tale of two halves; the Nouvel CC (11-9) boys basketball team battled back from a dismal 11-point first half by erasing a 27-11 halftime deficit, before turning the tables with a dominant second half, led by NCC junior T.J. Raedy, who orchestrated a Nouvel comeback, hitting six three-pointers in the second half, while the Nouvel defense managed to hold Valley Lutheran (13-9) high school to just 16-second half points (just 3-points in the fourth quarter) en route to a 52-43 victory over the Chargers in the opening round of the MHSAA class-C district tournament at Valley Lutheran high school tonight.
Valley Lutheran took the early lead, getting 3-points apiece from senior Matt Jahnke, as well as junior's Andrew Gunn, and Brady Hagenow, while Nouvel got 2-points apiece from Raedy, junior Josh Kuligowski, and senior Pete Snyder, as the Chargers pulled out to an 11-6 opening quarter lead.
The sharp-shooting Gunn dropped another 5-points to lead the Chargers with 8-first half points, while Valley Lutheran junior Jonathon Giglio added 4-points in the second quarter, for 6-first half points, helping the Chargers to a commanding 27-11 first half lead.
NCC was held to just 5-points in the second quarter, with Snyder and Raedy scoring 2-points apiece respectively, along with 1-point from Panther junior Chris Lemanek, who split a pair of free throws.
Similar to his 26-point effort in a 69-64 victory over Saginaw Michigan Lutheran Seminary (scoring 14-third quarter points) just four days ago, Raedy took over the third quarter, hitting 3 three-pointers, while adding a 2-point field goal, cutting the Chargers' lead to 40-31 after three quarters of play.
Raedy stayed hot in the fourth quarter, hitting a pair of free throws and 3 more three-pointers (two of which came after big offensive rebounds by Lemanek) who then kicked it out to Raedy, while the Panther defense held Valley to just 3-fourth quarter points.
NCC junior Michael Ehlman hit a clutch three-pointer down the stretch, which was followed by an officiating mistake in which the referee had mistakenly awarded Valley Lutheran a timeout while Nouvel had possession of the ball, all while the Panthers were clinging to a 46-43 lead with just over a minute left.
The Panthers, however, would regroup as Kuligowski made a layup and was fouled, but missed the free throw attempt for a 48-43 lead with just under a minute left, before Snyder and Raedy sealed the victory, making 2 clutch free throws apiece respectively.
Gunn led Valley Lutheran with 13-points, followed by Giglio with 9-points and Hagenow with 7-points, while Jahnke finished with 5-points. Junior Drew Greenwood and senior Bryce Howard added 4-points apiece respectively, while senior Luke Bushey would round out the Charger scoring with 1-point.
Raedy led Nouvel with a game high 26-points, followed by Snyder with 10-points, and Kuligowski, who finished with 8-points for the Panthers. NCC junior Michael Ehlman had 5-points, and Lemanek finished with 3-points to round out the Nouvel scoring.
Nouvel advances to take on a 13-6 Reese H.S. team (who had 1 of the 2 first round byes) in the class-C district semi-final on Wed. Mar. 7, at 5:30 pm at Valley Lutheran high school. Nouvel had previosly beaten the Rockets 64-53 back on Feb. 6, at Nouvel high school.
Saginaw MLS (9-12) who beat Vassar 50-41 in the later game tonight, will take on the other bye team, Saginaw Arts and Sciences Academy (5-13) in a semi-final matchup at 7 pm on Wed. night, following the NCC vs. Reese semi-final. The winners will advance to the MHSAA class-C district championship game on Friday night at 7 pm at Valley Lutheran.
Nouvel completes unprecedented comeback over Valley Lutheran as time runs out: