Raedy scored 14 of his game high 26 points in the third quarter... 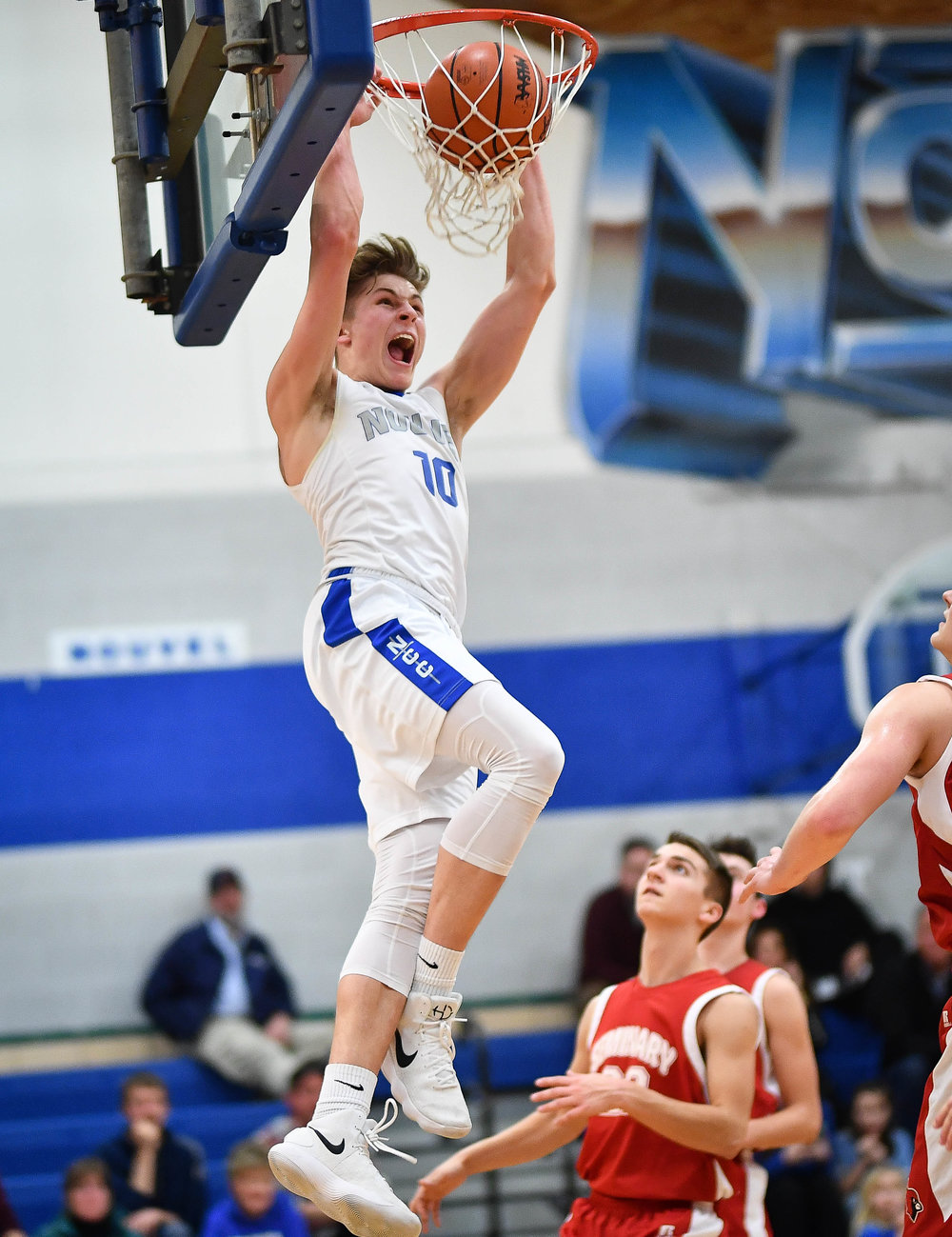 Fueled by junior combo guard T.J. Raedy, who scored 14 of his game high 26-points in the third quarter alone, the Nouvel CC (10-9) boys basketball team built its biggest lead of the game heading into the final quarter, before having to fight off a late charge, eventually pulling out a 69-64 victory over Saginaw Michigan Lutheran Seminary (8-12) on senior night at Nouvel high school tonight.
The Panthers had a difficult time handling MLS big man, 6-foot-6, 200-pound senior Nathan Spaude, who helped lead the Cardinals to an early 18-13 first quarter lead, scoring 6 of his team high 23-points in the opening quarter.
Nouvel fought back in the second quarter, with seven different Panther shooters filling up the score sheet, led by junior Jacob Burr, who hit back to back three-pointers, cutting the MLS lead to 35-33 heading into halftime.
The third quarter was all Raedy, who took over the game, scoring 14-points to help NCC build a commanding 13-point lead (57-44) heading into the final quarter of play.
MLS would not go quietly, however, as Spaude dropped another 8-points, while super sophomore's A.J. Alcorn and Max Nordie added five points apiece respectively, sparking a late fourth quarter push for Seminary, but a thundering slam dunk by NCC senior Pete Snyder caused the Panther student section to erupt midway through the final quarter, as Nouvel held on for the 69-64 win.
The Cardinals were led by Spaude, who had 23-points, followed by Alcorn with 11-points and Max Nordie with 10-points.
MLS senior Micah Neumann had 5-points, followed by senior Noah Nordie with 4-points, while seniors Jayden Lehr, Cade Kestner, and Adam Arrowsmith each added 3-points apiece respectively, along with 2-points from junior Brody Eastin.
Nouvel was led by Raedy, who finishded with a game high 26-points, while Snyder filled up the score sheet with 10-points, 7-rebounds, 2-steals, and 1-block, followed by junior point guard Michael Ehlman with 10-points, 2-rebounds, 4-assists, and 2-steals.
NCC senior Tate Hausbeck had 6-points, 6-rebounds, and 1-steal, followed by Burr, with 6-points, 1-rebound, and 2-assists, while junior Jonah Wright and sophomore Sam Buckingham each finished with 4-points apiece respectively. Junior Josh Kuligowski added 2-points for the Panthers, along with 1-point and 4-rebounds from NCC junior Chris Lemanek.
Seminary will open its MHSAA district tournament at home on Monday Mar. 5, with a 7 pm visit from Vassar H.S., while Nouvel will travel to Valley Lutheran high school for a 5:30 pm MHSAA district opener against Valley Lutheran on the same day.
Nouvel CC and Michigan Lutheran Seminary boys basketball teams warming up: