Nouvel junior T.J. Raedy banked in a three-pointer in the last second of OT, while senior Peter Snyder led NCC with a double-double... 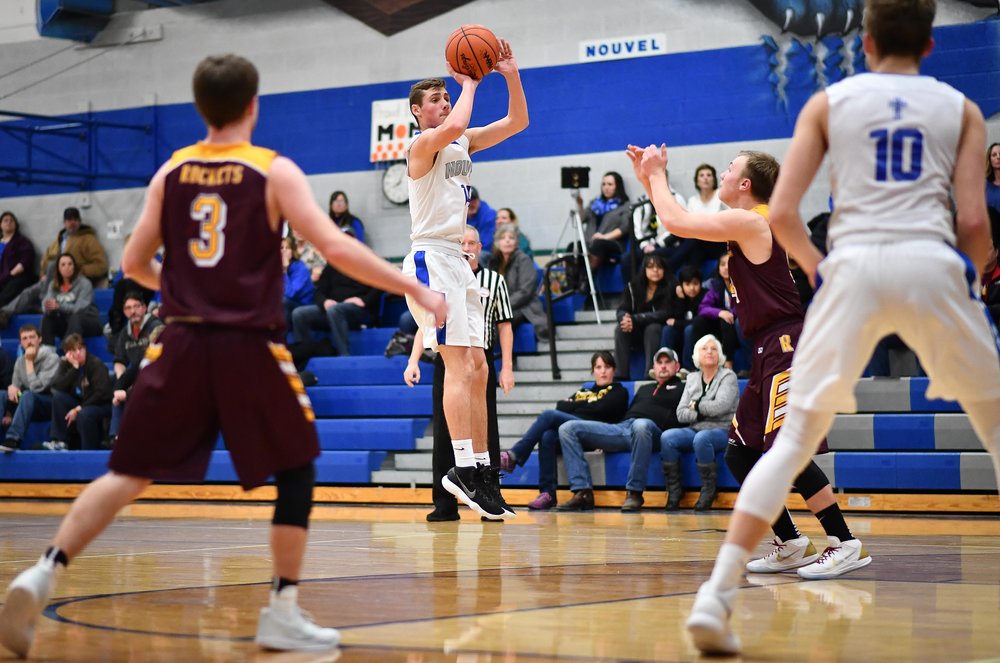 Saginaw Township:
The Nouvel CC (12-9) boys basketball team battled back from a 9-point deficit heading into the fourth quarter to tie the game (49-49) at the end of regulation, forcing overtime, where junior T.J. Raedy banked in a three-pointer off the glass in the final second of the overtime session for a 56-55 OT victory over Reese H.S. (13-7) in a MHSAA class-C district semi-final matchup at Valley Lutheran high school tonight.
With the win, the Panthers advance to the MHSAA class-C district championship game at 7 pm this Friday right back here in the Valley Lutheran gym against Saginaw Michigan Lutheran Seminary (10-12) who advanced with a 78-35 victory over Saginaw Arts and Sciences Academy (5-14) in the other district semi-final.
Trailing 35-26 at the end of the third quarter, Nouvel battled back in the fourth, led by senior Peter Snyder, who scored 9 of his game high 19-points in the final quarter, and junior point guard Michael Ehlman who scored 10 of his 13-points down the stretch, while Raedy (who recently scored 26-points in a 52-43 opening round district win over Valley Lutheran Monday night) was held scoreless until hitting a three-pointer, along with completing an and-one for 6-points in the fourth quarter tonight, before hitting his heroic three in OT.
Raedy actually had a very good chance to end the game in regulation when a rebound landed right in his hands, however, his put-back layup just barely rolled off the rim as the buzzer sounded.
For Reese in the fourth quarter, it was junior Adam Fisher, who scored 6 of his 10-points, along with senior Ethon Greenia, who added 4-points for the Rockets in the final frame, while sophomore Isaac Johnson scored all 6 of Reese's overtime points.
Nouvel had jumped out to an early 15-9 lead in the first quarter, led by sophomer Sam Buckingham with 6-points, and junior Chris Lemanek with 5-points, while Snyder added 4-first quarter points for the Panthers.
Johnson and Reese junior Gabe Robinson each drained a three-pointer for the Rockets in the opening quarter, while Fisher added 2-points, along with a free throw from senior Kyle Stockmeyer (who recently eclipsed 1,000 points for his career) for the Rockets.
Reese would go on a 12 to 5 run in the second quarter led by senior Luke DuRussel, who scored 4-points in the second quarter as the Rockets would head into halftime with a 21-20 lead.
The Rockets came out of the half and dominated the third quarter, led by Robinson, who dropped 7 of his 12-points in the third, along with a three-pointer from DuRussel, as Reese extended its lead to 35-26 after three quarters.
Robinson led Reese with 12-points, followed by Johnson with 11-points, and Fisher with 10-points, while DuRussel added 7-points.
Reese senior Tyler Terbush, along with Greenia and Stockmeyer, each added 4-points apiece respectively for the Rockets, as junior Andrew Frost rounded out the Reese scoring with 3-points.
Snyder led Nouvel with a double-double, in one of his most productive games of the year, scoring a game-high 19-points, 11-rebounds, 1-assist, 3-steals, and 1-block, followed by Ehlman with 13-points, 5-rebounds, 1-assist, and 1-steal, while Raedy added 9-points and 2-rebounds for the Panthers.
Lemanek finished with 5-points, 3-rebounds, 2-steals, and 1-block for Nouvel, followed by senior Tate Hausbeck with 2-points, 3-rebounds, and 1-steal, while junior Josh Kuligowski rounded out the NCC scoring with 2-points and 1-steal.
Nouvel will be the home team on Friday night when the Panthers take on Michigan Lutheran Seminary in the MHSAA class-C district championship in a 7 pm tip-off at Valley Lutheran high school.
NCC coming out for second half in a district semi final against Reese HS: