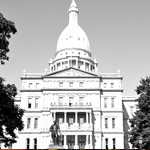 With a growing number of magazine and broadcast news sources turning into little more than marketing arms for commercial interests, it seems fitting to turn the spotlight upon recent legislation and activity at the state and national level that will decidedly impact all Americans. Here's a summary and survey of recent legislative activity that may have slipped through the mainstream radar.

In the Michigan legislature House Bill 4019, which was introduced by State Rep. Douglass Geiss (D-Taylor) would impose a plastic shopping  bag tax of one-cent per bag on plastic grocery and shopping bags, with some exceptions. Retailers would be subject to related record keeping and reporting mandates.  Meanwhile, House Bill 5417, introduced by Rep. Jimmy Womack (D-Detroit) would allow Detroit to create its own lottery subject to a vote of its people.

Under this act, Congressional members will be explicitly barred from buying or selling securities on the basis of knowledge gained through their Congressional service, or from using that knowledge to tip off anyone else.  It is not true that Congress has exempted itself from insider trading laws; but legal experts have questioned whether an insider trading case could be brought successfully against a Member because the law does not clearly apply to knowledge gained through the legislative process. This Act makes it clear that Members trading on non-public information would violate the law.

More significantly, this act requires the Government Accountability Office to investigate the role of 'political intelligence firms', which try to learn inside information from lawmakers and their staffs and sell that information along to private clients.

Another significant move a couple weeks ago occurred when the U.S. Senate voted down a motion to consider a bill that would repeal tax benefits for the largest oil & gas companies. Supporters fell nine votes short of the 60 needed to proceed. This bill would have redirected the funds saved to extend tax credits for renewable energy. It was opposed by major multinational oil & gas producers, petroleum refining & marketing concerns, Chambers of Commerce, and Fiscal & Tax policy interest groups such as ExxonMobil and the American Petroleum Institute.

The vote fell mostly along party lines with most Republicans voting against the motion and most Democrats voting for it. Two Republicans, Olympia Snowe (R-ME) and Susan Collins (R-ME) voted 'Yes', however; while four Democrats, Mark Begich (D-AK), Mary Landrieu (D-LA), Ben Nelson (D-NE) and Jim Webb (D-VA) voted 'No'.

On other fronts, Louis Freeh, the trustee overseeing the bankruptcy of MF Global Holding Ltd. May submit a plan in the coming weeks asking a bankruptcy judge to pay bonuses to top MF Global executives - even though the company is now bankrupt and thousands of its customers' money is still missing.

MF Global's bankruptcy last year, the 8th largest in U.S. history, resulted in a loss of as much as $1.6 billion for the firm's customers. Thousands of farmers, ranchers and small business owners are still owed tends of hundreds of thousands of dollars.

New York-based MF Global was in part a Futures Commission Merchant, coordinating the purchase and sale of futures contracts for its customers. Futures are used by farmers, ranchers and business owners to limit business risk by locking in a known price on a commodity that otherwise fluctuates in value. For example, futures contracts can be used to lock in a set price on agriculture products like corn, wheat, or livestock. The Senate Agriculture Committee has jurisdiction over commodity trading as it is used by farmers to hedge risk.

The National Priorities Project recently took a look at how Michigan currently benefits from Federal spending.  The average Michigan resident received $5,846 from the federal government in 2010 - benefits that largely came through Social Security, Medicare & Unemployment Insurance programs.  Unemployment in Michigan is well above the national average and last year more than one in every five workers was underemployed.

Michigan residents paid $5,109 in federal taxes on average in 2010, a number that includes income & payroll taxes, estate taxes, as well as federal excise taxes on goods like cigarettes and gasoline.

In addition to Michigan residents receiving considerable aid from federal programs, the state government relied on federal money for more than a third of its revenues in fiscal 2010. For every dollar of revenue in state coffers that year, 37 cents came from Washington.