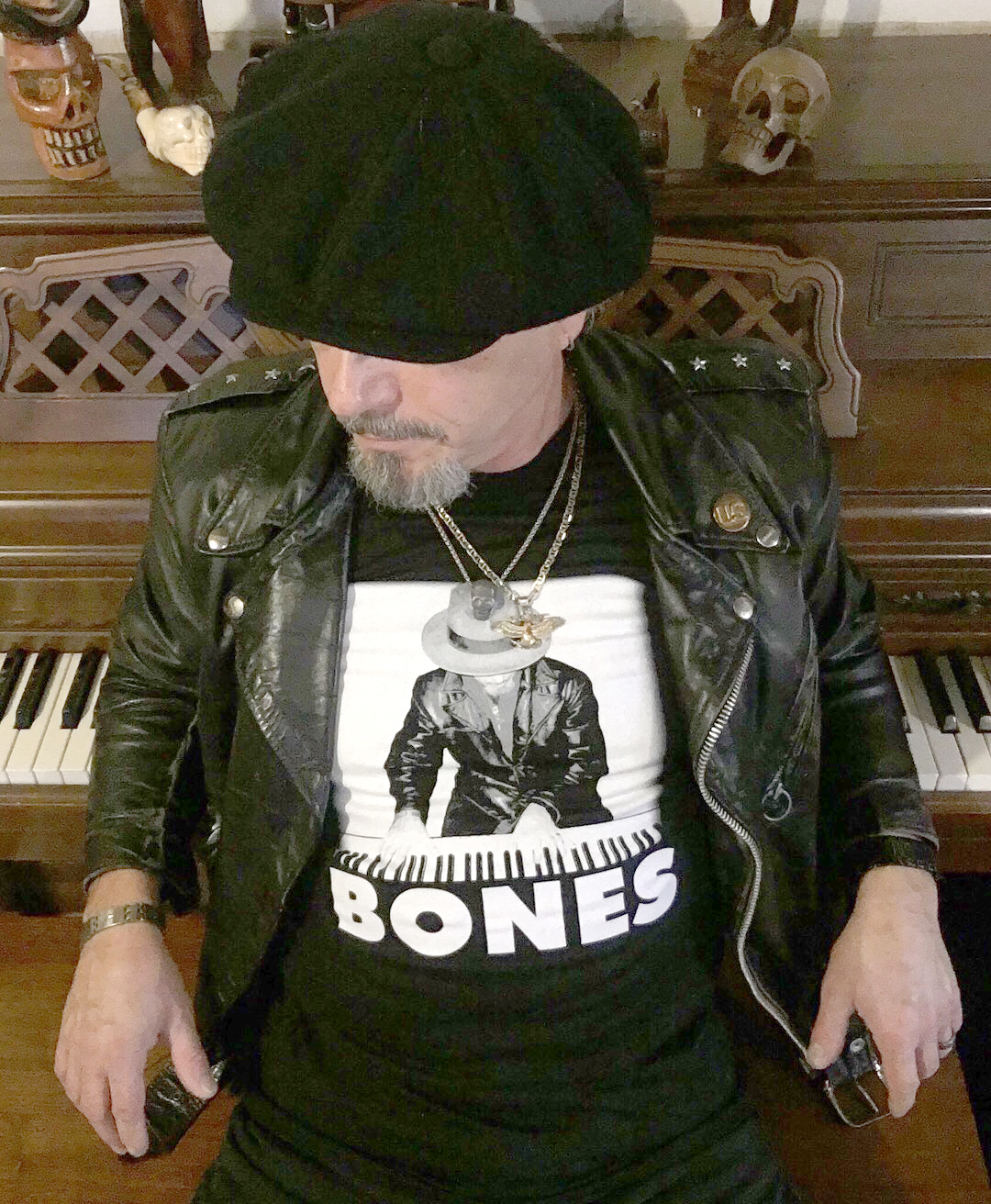 Jimmie Bones is best known as the blues & soul oriented roots rock ‘n roller at the piano, organ, harmonica, and backing vocals with Kid Rock and his Twisted Brown Trucker Band. But with his first solo release Snakebit & Wandering, Bones deftly displays his abilities as a solo artist, singer/songwriter, performing a relentless barrel-house driving piano and delivering soulful lead vocals as he fronts his own band, The Snakebit Wanderers.

Beginning formal keyboard training at the age of ten, Bones says that during his formative teenage years, he immersed himself in the music that spoke to him and his professors were the likes of Ray Charles, Fats Domino, Jerry Lee Lewis, Johnnie Jonson, Nicky Hopkins, Ian Stewart, and the Small Faces Ian McLagan – keyboardists who graced and augmented the textures of recordings from the Golden age of Rock that Jimmie was (and still is) addicted to.

In addition to his work with Kid Rock, Bones has also been fortunate to work both onstage and in the studio with the likes of Bob Seger, Peter Wolf, Sheryl Crow, Hank Williams, Jr., Mark Farner, Dick Wagner and many others.

With his debut solo release, Bones displays a deft mix of Blues, Soul and Roots Rock ‘n Roll influences pouring into his gritty singing, playing, and songwriting. Recently I caught up with Bones to discuss his latest release and his approach to recording and performing.

Review: With the influential keyboardists that inspired you growing up, what did they do to inform your own sensibility about how to approach keyboards in a rock’ n roll band?

Bones: Obviously, each of those great artists drew heavily from the Blues, which is where it all comes from. I grew up in an era where you slowed down the turntable from 33 to 16 so you could hear their licks – it would be in the same key, but you could hear them execute it real slow. I had a short period of formal training; but to be honest, it didn’t push me to the level of inspiration that I wanted to apply myself.

Actually, I learned to play the Hammond B-3 organ before the piano; but the more I listened to all those great rock pianists, especially Jerry Lee Lewis, Little Richard and Johnny Johnston, that pushed me more into the piano as an instrument. Organ is cool, but piano is really the essence of rock ‘n roll as far as keyboards go.  Mainly, they taught me how to use my left hand when playing – it’s similar to what Keith Richards & Ronnie Wood do with their guitars when they label it ‘weaving’. You’ve got do that as a piano player when you ‘weave’ with multiple guitar players. It’s what Nicky Hopkins and Ian McClagan did with their voicings, because when you play within a band what not to play is as important as when and what to play.

Review: You’ve been affiliated with Kid Rock & the Trucker Band for 20 years now and this year is the 20th anniversary of ‘Devil Without a Cause’, Rock’s first release on Atlantic. Is if difficult working with all the egos in that band?

Bones: It’s a very unlikely marriage of different styles playing with the Trucker Band. We all come from different backgrounds, but in the end the glue is Bob Richie himself because he’s so versatile. Our original guitar player Kenny Olsen was a freak and with all of us coming from different backgrounds and genres, it’s a bit of an unlikely marriage. But Bob is such a fan he knows how to mix all those ingredients together and come up with the Trucker Band sound.

Review: Tell me a bit about your session work with Sheryl Crow and Hank Williams, Jr. and how that helped inform your first solo album. What’s the biggest challenge in going from backing musician to the forefront?

Bones: I was fortunate to work with those people and with my solo work I really get to put my own signature on what I want to do and lean towards that. I concentrate more on the music and less on being part of an extravaganza show. Actually, I can perform my whole record with just me and the piano, or put a small band together behind it.  Because I envisioned the songs that way, I can start laying stuff over the top of the material, so it gives me options when it comes to live execution.

I’m influenced by Ray Charles as much as by Patti Smith and Iggy Pop and Tom Waits, so I’m not trying to classify myself within any particular genre. People either like my music or not and take away what they will; but honestly, there’s not a lot of front-end piano players out there right now, apart from Jackson Browne and Elton John.

Review: That’s cool you approach your songwriting that way. I remember reading an interview with Elton John when he talked about how Neil Young came to his house one night and played all the songs from ‘After the Goldrush’ on an upright piano before the actual studio album was released and he was totally blown away.

Bones: Neil Young is a good example of what I’m talking about. Any of his songs he can perform solo or within the format of a hard driving rock band. I did Farm Aid once and Kenny Olsen and I were coming off Willie Nelson’s tour bus. It was like the scene in ‘Up In Smoke’. We came falling out of his bus and this big billow of smoke came out. It was dusk and this figure was sitting on the stoop of the tour bus and it was Neil Young.  He looked at us and said it reminded him of a scene from Fast Times at Ridgmont High, but we ended up having a long conversation with him, which is one of the highlight moments of touring with Bob over the past 20 years.

The biggest thing I’ve learned working with all these great songwriters is simplicity. No matter how good your chops are, you need to remember you’re playing somebody’s story. It’s not about shifting your gears into a keyboard performance – keep it simple and take a solo. I would rather listen to a guitar or piano solo that I can sing back in my head than some zillion notes of musical calisthenics. You can’t tell a story that way.

Review: So how are you rolling out this new release?

Bones: It gets a little tricky as things are getting busy with my Kid Rock schedule. We begin a new tour in Nashville that’s rolling into April, but I have a little space to do solo bookings. Plus, I have another record of original material I’m starting to track, so I may release another EP to get some stuff out there that I’m feeling passionate about.