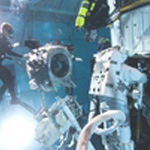 Hubble 3D is a fresh documentary about the STS-125 Mission that took place in May, 2009. This was a routine maintenance mission for the Hubble telescope filmed in Imax 3D from the shuttle’s cargo bay. Starring Leonardo DiCaprio and dire ted by Toni Myers, this is an elegant portrait of the best spy cam humanity has ever invented; and about as close as most of us ever will get to a trip into space.

It's the film's star trek that truly dazzles. While the words themselves grow a bit too precious, the images of 'Hubble' - both human and cosmic - more than compensate." For once, the old cliché is true: This film has to be seen to be believed. If a photo is worth a thousand words, do the math and tell me what an actual photo of 100 billion galaxies is worth.

Photographs, enhanced through computer-visualization techniques made by the Space Telescope Science Institute in Baltimore, allow viewers to blast through the farthest reaches of the universe with a real sense of discovery. It's impossible to view these solar systems and not feel a humbling appreciation for our own.