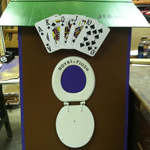 With one of the coldest and most snow-filled winters in recent years, The Friends of Hoyt Park are earnestly engaged in a series of events sponsored by Dow and hosted by PRIDE in Saginaw entitled Bringing Back the Ice Again at Hoyt Park, which features Free Open Skating & Sledding, $2.00 skate rentals, and Free Hot Chocolate & Cookies during a series of events when the renovated Warming House is open.

Last year The Friends of Hoyt Park kicked off their inaugural season of events, bringing the welcomed and long anticipated sight of winter activity populating this legendary community resource.  And this year several new and significant events are planned to augment attendance and provide something fun and family oriented to do on these cold winter weekends, all leading up to the Ice Blast Skate & Sledding and First Annual ‘Outhouse Race’ on Saturday, Feb. 15th from Noon – 4 PM.

During the 1920’s when Hoyt Park was at its peak during the winter months, they would often times have record days where over 7,000 patrons enjoyed ice skating, sledding, and tobogganing in ONE DAY!

Back then Hoyt Park was averaging 100,000 skaters every winter and throughout the decades it has remained the Crown Jewel of Saginaw’s parks and recreational programs, despite the fact that with large numbers of citizens leaving the city over the past 20 years, coupled with budget cuts, in 2003 the City could no longer afford to maintain Saginaw’s Parks and Recreation programs.  City baseball, softball, flag football and other recreational leagues, which had provided an outlet for the City’s residents throughout many generations, were suddenly no longer available.

For five long years our city went without the use of Hoyt Park and it wasn’t until 2008 that concerned Saginaw citizens came up with the idea to create a group that would help resurrect and maintain the historic park.  It started when Chris Packard would often bring Christian Youth Groups to the park to play Baseball games.  Chris wanted to start a “grassroots” effort to make Hoyt Park available to all Saginaw children.

Larry Brethauer had also contacted Chris offering his support to help get his Christian Youth Group started and rallied Saginaw City Council support from Paul Virciglio and Dan Fitzpatrick.  Eventually, the four agreed to a meeting. Jonathan Pope and Eric Rutherford (who worked for the Saginaw YMCA at that time) also came to the meeting. Dick Garber, Tom Webb, Tom Mudd and Dan Kenel joined the others at that first meeting. Like a Phoenix rising from the ashes, the group Friends of Hoyt Park was created and signed a 99-year lease with the city to

The Friends of Hoyt Park formed in 2008, initially setting its sights on bringing summer baseball back to the historic park. With the 1,800-square-foot warming house operational after a $400,000 renovation, the beauty of this recreational landmark was finally opened to the public last season.

According to Brethauer, last year’s opening of the park exceeded expectations for a first year event. “I believe we’re at the tip of the iceberg with Hoyt Park, because a lot of people are still not aware of all that we offer.  But I would say that we would have anywhere from 800 to 900 people skating and using the park for a six hour period each weekend, which was really good. This year we are looking to build those numbers into the thousands.”

Adds PRIDE’s Jeanne Conger, “For each weekend event this year we are featuring music on site during the four hours when the warming house is open and hot chocolate and cookies are served; and thanks to our sponsors, people are truly rediscovering the magic of this important community resource.” This year’s sponsors include Dow, PRIDE, The City of Saginaw, Meijer, Macdonald Broadcasting, Tom Braley, Catholic Federal, Hausbeck Pickles & Peppers, and HealthPlus.

Upcoming weekend events to look forward to include:

• Superbowl Skate • Saturday • February 1st from Noon to 4:00 PM. “Because this happens to be the weekend that the Superbowl is played, people are encouraged to show up with their favorite team jersey on and enjoy the ice,” notes Conger. “A Live remote from the JOE will also be happening that day.

* Skate with the Saginaw Spirit • February 2nd • 2:00 – 3:00 PM. “Last year we featured this and the kids loved it,” notes Brethauer. “The Saginaw Spirit are idols to many young kids and skaters, so this is their chance to get out on the ice and ski with their heroes.”

According to Mike VanEck, the purpose of the 1st Annual Outhouse Race is to bring people down to the City of Saginaw through the creation of a family friendly event. “When the idea of an Outhouse race was first presented to us, it sounded a little crazy; but the more we looked at it we feel this has the potential to grow and draw people from all over the state.”

Each contestant is charged with constructing an Outhouse of minimum dimensions that are 3 ft. by 4 ft. by 6 ft. tall, with a minimum of three and maximum of five people on each team. “You can push, pull, or drag your Outhouse and it must be mounted on skis, plus you need a toilet contraption inside for one team member to ride, with toilet paper mounted inside,” he continues.
“One or two team members will be pushing or pulling, similar to the way a bobsled team gets a bobsled going.”

“We felt this was a great event to pursue and this inaugural event will be a trial period, but we also believe it can gain some ground and bring people to the city,” states Van Eck. “I’m from Grand Rapids originally and know people that intend to drive over and watch this event, so it does have enormous potential.  We’ll be measuring out an area for racing and this should offer something fun and interesting that people can take individual ownership of and bring their creativity out. It should draw a lot of people to watch these crazy races.”

“When you drive by Hoyt Park, you don’t see the ice form the road, so with these events we hope to expose more people to the wonders of the park. As it gains traction it will draw people from outside the immediate Saginaw area.”

“This year we have about eight teams verbally committed and registrations are due by February 1st,” notes Mike. “It’s something that is different and fun and Hoyt Park is the perfect place to stage it. ”Registration will begin at Noon and the races will start at 1:00 PM. Hopefully this will appeal to craftsmen, builders, and people that like to tinker, as well as athletes and those looking for some comedy with something that is both funny and exciting.”

This year’s winner of the Out House race will receive 15 tickets to the Eagles Nest and Pizza & Pop compliments of the Saginaw Spirit. Next year Van Eck hopes to offer more categories and prizes for Best In show and Fastest Time.

Gauging from last year’s attendance, the second year of Bringing Back the Ice is also exceeding expectations. “Judging by the free hot chocolate given out and skates rented last year, we drew anywhere from 500 to 1000 people per event, and staged five events, so that’s a pretty sizable start,” comments Brethauer. “We had some SVSU students from Australia and London skating and drew people from Kalamazoo, Grand Rapids, Detroit, and the Houghton Lake area.”\\

“Many people ask if they can go skate at the park at other times than when we stage these events, and the park is definitely open to skating, but we only have the warming house open during these events because we are a volunteer based organization,” notes Conger.

While the Friends of Hoyt Park do maintain the ice, they only guarantee a maintained rink during these staged events, seeing as the size of the rink is that of three-and-a-half hockey rinks. “It’s a huge ice rink,” states Brethauer. “We need 800 feet of fire hose that we hook up and start laying down water with and it takes three or four guys at least two to three hours to groom the ice. Plus if it gets too cold you can’t put water down, so we have to plow the snow off first and then tractor and broom the residue off in order to buff it.”  Presently Friends of Hoyt Park has a core of a half dozen volunteers to maintain the ice, but according to Brethauer can always use more help and fresh volunteers.

But for this core nucleus of community activists that got Hoyt Park back to shape, the benefits have been immensely rewarding. “Anytime you have a passion and come up with an idea the first thing you get is a group of naysayers that say it can’t be done,” reflects Brethauer. “But people will definitely support something if it has value; and there is a vein of emotion going back to great great memories from this park that are securing it as an asset for the future.”

For more information and to volunteer with Friends of Hoyt Park or get involved with the First Annual Outhouse Race, email mvaneck@gatewayfinancial.org by February 1st.