COMPUTERIZED VOTING and Protecting the Polls on Election Day 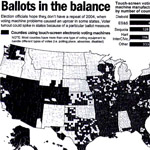 It was in the wake of the hanging-chad disaster of the 2000 Presidential election, when recounts of paper ballots in Florida dragged on for weeks and ended up before the U.S. Supreme Court, that Congress decided to address the issue of voting integrity.

In 2002, Congress approved the Help America Vote Act (HAVA) - a one-time infusion of money to help states across the country redo their antiquated election systems.

Some $3.9 billion was spent by Congress and promised to states, to be accompanied by reworked election standards. One of the main changes was the implementation of 'touch screen' voting machines.

The 'Big Three' machine manufacturers consist of Nebraska based Electronic Systems & Software (ESS), California-based Sequoia Voting Systems (the type used in Saginaw County); and Diebold Election Systems of Ohio, which supply most of the 180,000 precincts in the United States.

However, problems surfaced in the 2004 election, when 36 millions votes were cast on touch-screen systems, and millions more tabulated by optical-scan machines owned by the same companies.

Three of the four major companies have close ties to the Republican Party, with Diebold contributing at least $300,000 to GOP candidates since 1998. In a 2003 fund-raising e-mail, the company's then CEO Walken O'Dell promised to deliver Ohio's electoral votes to Bush in 2004.

That year, Diebold counted the votes in half of Ohio's counties, and due to problems with memory cards overloading and machines freezing up, coupled with questionable security safeguards, several security breaches existed.

In October 2005, the Government Accountability Office issued a damning report on electronic voting machines, citing widespread irregularities & malfunctions; the GAO concluded that a host of weaknesses with touch-screen and optical-scan technology "could damage the integrity of ballots and voting system software by allowing unauthorized modifications." Indeed, machines may have inflated Bush's tally by 260,000 votes in Florida.

Despite the problems & criticisms, this year more than one-third of the nation's 8,000 voting jurisdictions are expected to use electronic voting technology for the first time.
One of the major problems with many of the new systems is that they do not leave a 'paper' trail' whereby the accuracy of tabulation can be verified.  Hillary Clinton proposed a bill in the Senate that would require paper trail verification in all electronic systems, but it was defeated.

Consequently, whether or not a paper trail is allowed for verification is entirely up to the individual states.  All this at a time in our nation's history when we need a clean vote more than ever.

Bringing the Problems Closer - Controversy in the House

In that pivotal year 2000 election year, controversy came close to home in the right race between Democrats Carl Williams and Delbert Schrems, both vying for the 95th State House of Representatives seat that year in the August primary.

Schrems lost to Williams by only 28 votes, yet during the recount then County Clerk Roland Niederstadt discovered that one in fifty ballots went uncounted in Saginaw because the compilation equipment was under-counting at a ratio of 1.8 percent. With 7,401 votes cast in that race, it was determined that 138 votes were lost.

The Board of Canvassers certified the election results at the time, refusing to perform recounts in seven of the 95th district precincts. Five of those precincts were located in areas more likely to favor Schrems.

Because State Statute requires the numbers of all ballots to match either the poll books or computer printouts, in precincts like St. Stephen's, for example, three ballots were discovered from Salinas School. Therefore, according to state law, these precincts could not be open to a recount.

Schrems appealed the Canvassers decision to Judge William Crane, but Crane determined he had no jurisdiction under the state statute to interfere with the canvassers. At the time Crane told The Review, "the Board of Canvassers could have done the recount, but there was no record of where the canvassers even took a vote, which disturbed me. It was determined in closed session."

Given problems in the past, framed by the growth of electronic voting systems under the HAVA Act, we turned to current County Clerk Susan Kaltenbach for assurance that in this 2006 election year, with for-profit companies being given unprecedented power to supply new machines to precincts without any real oversight, hopefully this would not be the case in Saginaw.

A Conversation with the Clerk

As Saginaw's County Clerk, Susan Kaltenbach is responsible for overseeing the voting tabulations in 90 precincts throughout Saginaw County. She runs a tight ship and is equally concerned about the issues surrounding electronic voting.

"Unlike many states, Michigan requires a paper trail verification, which is mandatory," she explains. "All of Saginaw County uses the electronic optical scan tabulators and this equipment provides a paper trail in that each marked ballot is kept in a locked container."

"Many groups are attempting to scare voters and malign election officials by saying this equipment is not tamper proof, but they confuse us with the electronic touch screen equipment used in other states. Our equipment is the best available technology at this time."

Because of the HAVA law, each precinct in Michigan is mandated to have one touch screen machine by 2006 to enable disabled people to vote by themselves. "All of our voting places are handicap accessible," notes Sue, "and because a few precincts are located together in the same building, all together we will have 81 new touch screens.
At a cost of approximately $5,500 per machine, the federal government will have spent a half million dollars on Saginaw County alone to make voting handicap accessible, and the private entities that manufacture these machines that much richer.

"All these new touch screens do is mark a ballot," she continues, "and they process audio and offer buttons in Braille, so all people with disabilities will be able to vote independently.  The regular opti-scan machines will also be in place for the majority of voters."

Again, these new touch screens for the disabled will also afford a 'paper trail.'
When asked about the tabulation concerns that marred the Williams/Schrems race in 2000, Sue is confident about the integrity of the new system.

"Back in 2000, the City of Saginaw had inferior Opti-scan machines that experienced tabulation errors. In 2003 the city bought new equipment, which is an even newer version of the Sequoia tabulators that we have as part of the HAVA Act," she explains."
"Plus, the city has moved to an individual based precinct counting system, whereas it used to be placed in a box and taken to City Hall for tabulation on a big machine. This is another reason we chose the optical scan, because if a person over-votes or cross-votes, the ballot is spit back. The machine is programmed not to accept a cross or an over vote."

"The biggest problem is when sealed numbers do not match what is written in the poll book," she continues. "If a seal has been broken, you can't trust what's in there and this is when you supposedly cannot recount ballots. Hopefully, with new workers in the City, that situation will improve. The average age of an election worker is 70-years, and the simple fact is that's a long day for older people. We are hoping to get more younger people involved."

A thorough demonstration by Susan reveals the security involved with Opti-Scan voting machines. Once voting is completed, all data is stored on a 'prom pack' and placed in static free bags zip-locked with seals. Runners then bring them into the Clerk's office to be tabulated, and assure all vote numbers match with the poll books.

"Once all the ballots are returned and we verify they match the poll books, we start the total tabulations. Each prom pack undergoes thorough testing locally before its inserted into the voting machine, and we run a lengthy test ballot program proscribed by the State of Michigan," emphasizes Sue.

"One of the things I want control over is the vendors," she stresses. "We do our tabulations in-house, but vendors will do it for you and will charge you plenty for it."

"The difficulty we ran into with the most recent August primary had to do with the fact votes were not accumulating while we were tabulating. The vendor forgot to install a piece in the program that allowed it to do that, but once we got the piece from Denver, we were able to install it and then read all the voting information.  All the information was still there."

"One thing we are not doing is using modems to collect the information," adds Sue. "We've always had runners and I feel there are some problems that could exist with modems, so we are sticking with runners."

"They usually get here about 9 PM, so if everything reads well, we should know the outcome of most races by 11 PM."

After the 2004 breakdowns in Ohio, Maryland, Florida, and other less publicized states resulted in lawsuits targeting software manufacturers in at least nine states, more eyes are being opened in this election year.

Obviously, the sanctity in the act of voting is one of our most cherished, and fought for freedoms.  The fact that Michigan requires paper trails, while eliminating much concern, does not mean vigilance is not required at all levels in a participatory democracy.

Susan Kaltenbach does not shy away from that vigilance because she is well aware of what is at stake on election night.

And it is up to each of us to assure, in our own way, that the system not only works, but is not corrupted.