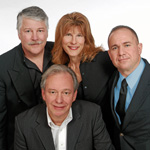 When it comes to Jazz, the mid-Michigan area has enjoyed a storied reputation for producing innovative and nationally renowned performers, from the saxophone acumen of Sonny Stitt  to the melodic pop-styings of Stevie Wonder, Felton Sparks, and Jerry Holmes.

Without doubt, Michael Brush is at the forefront of keeping the idiom of Jazz alive, not merely in the classrooms of The Saginaw Arts & Science Academy where he serves as an honored music insturctor, but in clubs and live performance venues where he can be found regularly tickling the ivories and crooning along with vocalist Julie Mulady in his band Brush Street.

This year at the 2010 RMA’s, Brush and his combo five awards, including Best Small Jazz Combo, Best Songwriter, and Best Instrumentalist. Additionally, Brush received recognition for his project The Blue Rhythm Quartet, which he assembled along with drummer Jim Fulkerson and horn player Jeff Hall as being recognized as Review Artist of the Year – the only award category in the awards ceremony that is not determined by popular vote but by the editorial staff at The Review.

After a busy awards week, I caught up with Brush to ascertain his reaction to once again gaining such rampant favor among the jazz loving public of the Great Lakes Bay Area.

Review: So Mike, what was your reaction to being given the green light in so many varied categories?

Brush: First, I regret missing the Ceremony this year, as I always look forward to it.  It was held this year during our concert week and something had to give. With so much attention, I would have felt a little like Taylor Swift had I been in attendance!

But thank you for having created this special recognition for local musicians and those associated with production. It has become an important and unique part of the fabric of the musical experience in this area. No one else has ever attempted to acknowledge so completely the breadth of musical genres and those who aspire to excel within them. You do us a great honor.

Review: What has Brush Street been up to in 2009-2010 and have you been working on any new original material? Are there any projects you’ve been involved with that truly stand out and inspire you?

Brush: 2009 was slow. 2010 is looking better. We’ve got to get into the studio and have songs ready to record that Julie already knows and were written for her. With new recordings to be completed and follow-up release events, we should be getting back into action.

I’ve also had the opportunity to write a few songs for Our Magical World, a children’s TV show pilot created and produced by Matt Bethune at Ball State along with Nate Mikulich. Recently I also wrote an a cappella setting for We Are The Music Makers by O’Shaunessy for the talented High School Voice/Keyboard class as SASA. The idea for this was presented by Jeremiah Kraniak who has just completed his teaching practicum with us at SASA. He and I made many musical choices and edits – a new approach for me, and necessary for this one. Jeremiah has been great to work with.

But Julie and I are working on a separate new project and we’ll let you know when we’re ready.

Review: What is your reaction to registering such consistent support among the voting public over the years?

Brush: I think about people sitting down alone at their computers and voting on the musicians and technicians they know and respect. It is very cool that people care enough to do this and is not to be taken for granted.  I certainly appreciate those votes of encouragement and support and the inspiration and motivating they bring.  Again, I am sincerely grateful for this recognition.