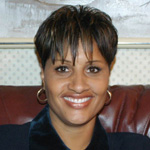 There's a new voice in the chair of the Saginaw County Board of Commissioners. She says that while she recognizes there is a learning curve in this new role, she is also humbled by the confidence her peers have placed in her to represent them, and stands ready to serve in advancing Saginaw County.

Bregitte Braddock of Saginaw's northwest section was voted unanimously to assume the chair seat vacated by past chairperson, Cheryl Hadsell.

The Board of Commissioners consists of 11 Democrats, Braddock among them, and 4 Republicans. Braddock has shown an appreciation for low-tax fiscal responsibility, mixed with a balance of progressive viewpoints when it comes to the government's role in serving.

Braddock grew up in Chicago and moved to Saginaw in 1984 to launch a career in management at the then-General Motors Saginaw Steering Gear Plant, where she now serves as production control manager for Delphi Steering.

Before seeking and winning an open County Board seat in the 2004 election, much of Braddock's civic involvement was non-political. She is a member at New

Covenant Christian Center, and her two children in Saginaw city schools have achieved in both the areas of academics and sports. Teri Braddock is a sophomore at Jackson State University, majoring in health care administration while playing for the school's women's volleyball team. Norman Braddock Jr. is a freshman at the Saginaw Arts and Science Academy and plays in all the sports activities available.

"I was really new to understanding government when I was elected to the County Board," Chairwoman Braddock says. "I suppose my only expectation was simply to get to know how government works. I quickly realized you learn by actively working and getting involved."

Bregitte Braddock is preparing to speak on the State of the County during the annual Chamber of Commerce breakfast at 7:30 a.m. on February 5th at The

Review Magazine decided to help the new chairwoman warm up with a few questions.

Review: What are top goals for the County Board in 2009?

Braddock: Our first priority is to fully engage in President Obama's economic stimulus package to achieve the greatest benefit to Saginaw County. Secondly, we need to evaluate how we can manage our county within our new revenue reality.  My goal would be to work with all municipalities to maximize and efficiently provide services to Saginaw County residents, minimizing our cost and eliminating duplication in efforts to the best of our abilities. We need to prepare ourselves for our future economically, educationally, and structurally.

Review: In Saginaw County's budget, would you spend down some of the balance in order to avoid more cutbacks?

Braddock: I've been comfortable with the numbers that have been brought to the board (by the administration). Last year we had to cut $4 million, in fact $4.7 million, and we were able to do so and balance our budget.

Review:  The prosecutor and sheriff often say that they should receive first budget priority because they provide public safety, which is the county's first need. Do you agree?

Braddock: I agree that public safety is a high priority, but I'd also like to focus on prevention as well, programs such as FYI (Family Youth Initiative) through Dr. Cheryl Plettenberg. Young people through FYI receive exposure to different types of events and activities, and they get to know the police officers. They're not as apt to get in trouble. We need prevention activities as well as law enforcement.

Review: Some people say a group of Democratic Party insiders run the county. Most recently, they cite the statements of departing Chairwoman Cheryl Hadsall and the reappointment of Dick Mallette to the Road Commission. How do you respond?

Braddock: Based on my findings in looking into some of the complaints, I was thoroughly convinced that Dick Mallette served his position to our satisfaction. While he may have chosen different methods of managing his duties, by all accounts he was effective and committed to getting the job done.  The Road Commission has been able to be effective and save this county money.  The verifiable amount of savings totals over $1 million in 2008.  This is the type of savings that we need to recognize and push for each year.

Review: Regardless of your independent approach, many people still perceive a clique of Democrats in power at the courthouse.

Braddock: We have three standing committees on the County Board. I appointed a Republican to chair one of them, Pat Wurtzel on Courts and Public Safety, which shows our interest to reach across the aisle and use people where we feel they can be effective leaders. This is the first non-partisan appointment since 1993. In terms of other committees, I appointed two Republicans as chairs, Ann Doyle for Legislative and Dennis Krafft for Budget and Audit.  Again, this demonstrates our willingness to place our trust in commissioners whom we feel, that while they are partisan, they will effectively serve with all of Saginaw County residents in mind.

Review: What should be the County Board's role in the future of HealthSource. Would you be willing to give up some of the county's control?

Braddock: Actually, I have just joined the HealthSource board myself and have only attended one meeting.  I've made some observations but think it's a little too early for me to have a specific position about the future of HealthSource.

Braddock: I want us to do more long-term planning. Unfortunately at this time, we are experiencing a decline in our revenue base.  We need to work to make Saginaw County more attractive to live, work, and entertain.  As I stated before, our goal should be to ensure that businesses to want to do business in Saginaw and people want to raise their families here.  I am thankful for all the businesses and families we currently have, and we need to maintain their commitment to Saginaw County.