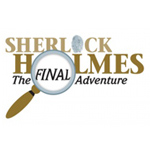 As they move into the culmination of their 2014 season, Bay City Players is delving into the world of mystery and intrigue that only a master such as Arthur Conan Doyle could create with a presentation of Sherlock Holmes: The Final Adventure, which was adapted by Steven Dietz and is based upon the original 1899 play by William Gillette and Sir. Arthur Conan Doyle.

A winner of the 2007 Edgar Award for Best Mystery Play, Dietz possesses a specific genius for creating both a story and dialogue that could pass for Doyle’s own that works both as a witty whodunit that is both deeply original and works as an expert homage to all things Holmesian.

The story essentially chronicles how the world’s greatest detective has seemingly reached the end of his remarkable career and is pursuing retirement when a case presents itself that is simply too tempting to ignore. The King of Bohemia is about to blackmailed by a notorious photograph and the woman at the heart of this crime is the famous opera singer, Irene Adler. With his trusted companion, Doctor Watson, at his side, Sherlock Holmes pursues first the case, following quickly by the affections of Miss Adler – and in doing so, marches right into the lair of his longlime adversary, the malevolent genius of crime: Professor Moriarty.

Through this spirited and fast-moving theatrical adaptation, Dietz presents Holmes at the height of his powers – surrounded by all the elements that fans of his exploits have come to expect: danger, intrigue, wit, and surprise.

For director Susan Ross, both the book & storyline for The Final Adventure compares strongly to the quality of writing we often associate with Conan Doyle. “I have been a longtime fan of Sherlock Holmes and out of the many different actors who play Holmes, my favorite is still the very dry Basil Rathbone,” she reflects. “Most adaptations of Sherlock Holmes have him as a man that is more of a thinking machine, whose life is spent in the pursuit of knowledge and problem-solving. He loves a good mystery and Steven Dietz’ adaptation brings us a Holmes that is multi-dimensional. He craves adventure, solitude, escape and elation. He is also anxious, moody, vain, opinionated, caustic and empirical. He is a man with a very dry sense of humor, a master of disguise, and he cares deeply for his friend Dr. Watson.”

As for the actors working this production, Susan feels they are a great ensemble cast. “Veteran Player’s actor Nathan Cholger fits well into the shoes of Sherlock Holmes; and newcomer Peter Tunstall, who is from England, serves as a sublime Dr. Watson. Player favorites Caitlin Berry fills the role of Irene Adler; Eric Stone is the King of Bohemia; David Bowden is our Professor Moriarity; and character actor Tommy Vassalo plays Sid Prince. The cast is rounded out by David Newsham, in his third production this year as James Larrabee, newcomer Katelyn Trepkowski as Madge Larrabee; and newcomer Justice Garcia round out the ensemble.”

As a director, what are some of the qualities and themes embedded within this production that Susan is trying to emphasize or focus attention upon?

“The friendship between Holmes and Watson is paramount to me,” she explains. “These men are necessary to each other. Watson has two roles in Holme’s life. First he gives practical assistance in the conduct of his cases; he is the detective’s right-hand man, action variously as lookout, decoy, accomplice and messenger. Second, he is Holmes’ chronicler – his ‘Boswell’ as Holmes refers to him. This story is written from Watson’s point of view, as a summary of ‘The Final Adventure’.

When asked the most challenging component involved with bringing this production to the stage at Bay City Players, Susan points to one of the bigger challenges centering around getting enough men to audition. “I was very fortunate to have so many talented men to choose from” she enthuses. “Another challenge is making the scene changes look seamless, because the characters walk from one scene to another as the furniture moves on and off stage in front of the audience.”

As for what she feels audiences will find most engaging about ‘The Final Adventure’, Susan responds that “Although it is not really a comedy, this production is actually very amusing. Between the melodramatic King of Bohemia, Professor Moriarty’s henchman, Sid Prince, and Holmes himself, I think the audience will have a good laugh during the entire run of ‘The Final Adventure’.

The Bay City Players production of ‘Sherlock Holmes: The Final Adventure’ runs from April 25 – May 4, 2014. Tickets are available online at BayCityPlayers.com or by phone at 989-893-5555.