Why We Need I Became the Sky 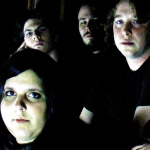 "I didn't go up in a balloon until I was thirty-five. That was a dream come true. That was Heaven and I was still alive.
I became the sky.

- from God Bless You, Dr. Kevorkian

Like a flock of Holy Modal Rounders seeking to score the next conversion, I Became the Sky are true believers, living the gospel and preaching of the transcendent power of music.
This band is dedicated to their craft - they don't just practice it; they live it. From Joe Bonham's guitar wizardry to Elissa Ford's gorgeous contralto and Chris Marks' lightening shock backbeat, these cats are the real deal.

They are immersed in their music and part of a larger community of musicians, artists and poets that hang together, jam and swap ideas. It's reminiscent of late sixties Ann Arbor when the MC5, Bob Seger, the Rationals, Catfish, and SRC would gig together, date each other's girlfriends, picnic and play a pick-up game of baseball on a Sunday afternoon.

Life is a circle and we just may be coming back around to a flourishing scene as bands like I Became the Sky re-invigorate the spirit of the times with original music, original ideas, total energy, and a sense of common purpose.

Founding members Joe Bonham, Elissa Lord and Joe Luplow were in Color Tour, an avant garde jazz-fusion band, prior to joining forces with Chris Marks and Somewhere Safe rockers Noah Sawatzki and Jon Kowaleski to form I Became the Sky.

It was a fertile period for the band as they established themselves as a creative force with boundless energy, fusing diverse genres using complex rhythms and experimenting with time signatures. Recently, I sat down with the re-configured band to interview Joe, Elissa and Chris with new members T.J. Bonnell (guitar) and Mike Conley (bass).

Review: How long have you been together?

Joe:  About 2 plus years. Noah moved to Oregon and the others left to pursue other interestsŠit's all on our MySpace site. We want you to talk to Noah if you have the time. He was a big part of the band. Elissa will be doing the vocals. TJ and Mike will sing harmonies to begin with.

Review: Your music is complex and progressive. How would you describe your music?

Joe: We just try to play what we feelŠ

Chris: We're different; every person that plays in the band has different tastes and influences. We are a melting pot of genres. Joe likes hard rock, Elissa prefers classical music.

Review:  I think you're a brilliant guitarist. Why did you choose guitar and who influenced your style?

Joe: My grandfather - Papa Bonham taught me some jazz songs like Gershwin's Summertime. I just like the range of the guitar - there is so much you can do with it. I can make it sweet or I can make it squeal like Pac Man. I've been influenced most by Jimi Hendrix and David Gilmour, but I don't use a lot of effects.
I love Elissa's voice - reminds me of the singer from Evanescence.

Review: Elissa - you have those rich sepia tones that are sensuous and earthyŠjust a great voice. Who inspired your vocal style and keyboard work?

Elissa; I've always liked Fiona Apple and Ben FoldsŠoh, yeah and Janis Ian. I loved her early work like At Seventeen. I always liked singing and I took vocal lessons from Dr. Julie Meyer for 5 years. She makes you take your voice and make it your own. My biggest influence was Mike Brush. He was my music teacher from 3rd grade until I graduated high school. I make music for myself but I also do it to make him proud. He's my "music daddy".

Review: You're one of the few bands that write original music that doesn't just rehash the same tired riffs and hooks) - what's your inspiration?

Chris: We are one of those bands that write music for each other - and for our fans.

Joe: We wouldn't have gotten anywhere without our fans.

Review; How do you compose your songs e.g., do you start with guitar and build it up from there?

TJ: My role with Joe is a lot more than just trading off between rhythm and lead - it's about harmonizing and depth like lines on a page; layers of sound.

Chris: Our songs start out jazzy and classical and as each individual enters the song, it becomes completely different.

Joe: Our transitions are so strangeŠit starts out soft and then it gradually becomes an all out rocker

Review:  Is it sometimes difficult to find your muse?

Mike: I don't have a problem finding my muse as I'm more into orchestration. Joe will play a piece of music and it will sound good and then I say but...

Review: Do you see music as a calling?

Joe: Absolutely - we all love music just for the sake of making music.
Elissa: I'd say so. There is nothing else we want to do. I wouldn't care if I live on the boxŠthe stage
Mike: The one place where we are really happy is on stage.

Review: What do you think of the local music scene today?

Joe: It's thriving. But I think people wish there were more venues. We've never been treated poorly by venues or by our fans.

Chris: It's about a difference in priorities. Some people get involved for the money. We play music for the sake of playing music and to have a good time. It's more of a feeling thing than a job - a lot of us have more "art" in it as opposed to commerce.

Review: In Saginaw, is there a community of musicians that support one another, hang out, play music and book shows together?

Joe: Bands help each other out...we're close with Life Size Ghost, Appearance & Reality, Sprout, Banana Convention, Your Best Friend, and Holy Gun. We get together barbecue and play bocce ball.
Review: What do you see in your future?

Chris: Hope to live the dream
Joe: To be a huge band (leggo my ego)
Elissa: We'd still play no matter what happens.
Mike: A real nice Dutch-boy haircut like Joe's

I Became the Sky just finished recording their first full length CD entitled Theoretically Silent at Chris Marks' studio, May Laps Productions, and it should be out in early summer 2008.
Chris said this about the production:

"We captured what we are Šit's how we sound live. We recorded it as if we were playing a gig."

I Became the Sky exemplifies the spirit of the artisan and embodies the renaissance of musical passion from a not-so-distant past. Their music is a partial proof that the divine can be experienced in the living self.

I Became the Sky and their community of minstrels is helping keep original music alive in mid-Michigan.

It's a good thing.

I Became the Sky will be performing at the 22nd Annual Review Music Awards Ceremony on May 12th at The Empire Club in Bay City.