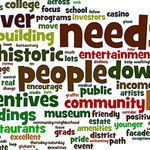 Read it and weep?

Or, read it and plan?

Spicer Group’s master plan process for the City of Saginaw starts with the first of five steps: Learn about the community. And on the website keeping track, saginawmasterplan.com, here’s what participants with Spicer have learned from the Census Bureau, the tax rolls and other sources:

Rob Eggers, Spicer Group senior planner and a lifetime Saginawian, doesn’t agree with skeptics who say there is no point in doing a bunch of planning when there doesn’t seem to be much of a future for which to plan.

Planning is not always tied to growth, he explains. There also are links to downsizing, or coping with a reduced tax base and the resulting loss of revenues.

“Struggling communities might be harder to plan for than more successful (or affluent) communities,” Eggers says. “There’s a lot to plan for in Saginaw - planning any future development, and planning what we’re going to do with all of our excess housing. And I believe that Saginaw can have a positive future.”

Followers of local news may recall that a council majority last spring selected downtown-based Spicer ahead of an out-of-town bidder, in spite of major objections from City Manager Darnell Earley.

Although he had sided with Earley, Mayor Greg Branch then appealed to the Michigan State Housing Development Authority, which relies on project revenues rather than state taxes, to ensure that the $85,000 for the plan was restored.

At the council’s most recent meeting, Earley indicated he now is on board and supportive. He also pointed out, in a similar manner to Eggers, that city leaders now must manage shrinking resources.

The second of two public meetings is on Thursday, Oct. 14, at Hoyt Library, from 4 p.m. to 6 p.m.  The first was Oct. 5 at Butman-Fish, before this edition of Review Magazine went to the printer.

A working committee of Spicer specialists, City Planning Commissioners and other civic and grassroots leaders also will host a series of separate focus group sessions with students, neighborhood groups and business executives.

Visitors to saginawmasterplan.com also may take part in a 15 to 20-minute online survey that explores the futures of the riverfront, the Celebration Square parks system, Downtown, Old Town, the St. Mary’s Cathedral District area, the Covenant Area, and the Court Street corridor.

Residents can air their ideas on the website and Eggers says future public meetings will be conducted similar to open houses, through which a citizen can simply stop by for 10 minutes or remain for the entire session. Of course, the old-fashioned thing for somebody to do would be simply to write a letter to the powers that be or speak at the Planning Commission or the City Council.

People may comment at any time through the process, which will extend into winter. A final draft will be available for review, spelling out “what do we want for Saginaw’s goals” and “what will Saginaw look like.” Plans from such groups as the Riverfront Commission and the Downtown Development Authority will be incorporated.

One point is clear: Nowadays, citizens should not expect any grandiose plans for a downtown mall (which eventually was built and failed) or a moving sidewalk surrounding the mall (which thankfully was abandoned).

To promote creative yet realistic thinking among citizens, organizers have loaded the website with sample articles that carry such optimistic titles as:

A frequent theme of these reports is that while rising poverty and job losses indeed represent urban hardship, demolition of rundown buildings and creation of green space are potential assets, because cities were commonly built with houses virtually right on top of each other.

An example of the problem was a summer flash fire that gutted a Detroit neighborhood because the structures were so close together. Hundreds of Saginaw families have obtained next-door lots where vacant houses were demolished, creating space for gardens, side yards and garages.

An example of land use is that Detroit now has a reported 800 urban farm gardens, up tenfold from only six years ago. Saginaw has a start in that direction with the Saginaw County Youth Farm Stand, organized through the Houghton-Jones Neighborhood Task Force, but much more potential exists for land use in the city.

According to Stephanie Harden, whom was involved with the Master Plan process since its inception, “This is an opportune time for citizens, council, businesses, city government, and neighborhoods to come together to produce a workable and sensible plan for the future – a plan that will preserve our historic character, bring successful businesses to the area, and ultimately bring jobs and stabilize our neighborhoods.”