Time out with Tany 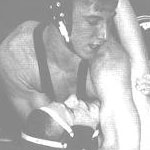 Since I've been providing sports columns to The Review for nearly four years now, I thought it'd probably be a good idea for readers to get to know me a tad bit better. This is my story, and I'm sticking to it:

Been there, done that

Born in Saginaw and raised in Zilwaukee (not to be confused with Milwaukee, the brewers of fine beer)

Never really had one but some friends call me JT

I love golf, but absolutely suck at it. Just don't have the time that you need to devote to it

Football on TV and Hockey in person

WHAT IS YOUR FAVORITE SPORTS TEAM:

WHO IS YOUR FAVORITE ATHLETE OF ALL TIME?

IF YOU COULD CHANGE ONE RULE IN SPORTS, WHAT WOULD IT BE?

WHO IS YOUR FAVORITE BROADCASTER OF ALL TIME?

WHO IS THE MOST FAMOUS ATHLETE YOU'VE EVER MET?

College because of its unbridled enthusiasm

WHAT IS YOUR FAVORITE SPORTS MOMENT?

When we beat the dreaded Red Army in the Miracle on Ice.

BASES LOADED, TWO OUTS IN THE BOTTOM OF THE NINTH OF GAME SEVEN OF THE WORLD SERIES AND YOUR TEAM IS DOWN ONE RUN. WHICH ACTIVE PLAYER DO YOU WANT AT THE PLATE?

WHAT DETROIT ATHLETE DO YOU ADMIRE MOST?

WHAT DETROIT ATHLETE WOULD YOU LIKE TO SEE LEAVE TOWN?

Now that Higgy and Joey Blue Sky have departed, I'd have to say Dominic "Chop Block" Raiola

WHO IS THE MOST UNDERRATED DETROIT ATHLETE?

WHO IS THE BEST ATHLETE SAGINAW COUNTY HAS EVER PRODUCED?

Bill Watson, a big-time track star at both Saginaw High and the University of Michigan. He could do it all

OKAY, NAME THE BEST TEAM SAGINAW COUNTY HAS EVER PRODUCED?

IF YOU COULD INVITE THREE PEOPLE TO DINNER, LIVING OR DEAD, WHO WOULD THEY BE?

WHO IS YOUR FAVORITE ACTOR?

WHO IS YOUR FAVORITE CARTOON CHARACTER?

Popeye. But he should've dumped Olive Oil. Too damn skinny

New York, New York . . . a city so nice they named it twice. Chicago is a close second.