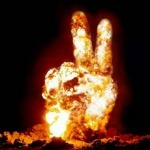 The college I attended had an arcane practice in which all freshmen were required to take an RTOC course.  It was an odd requirement for an engineering school, historically born from a loophole that allowed the private school to get a little bit of Federal funding.  For some guys, it turned into a calling, or at least a path to a “free” education.  For a generational displaced peacenik like me, it was a twice weekly water boarding with nonsense.  It was intended to be a reasonable deal.  School gets funding, freshman gets a theoretically easy A.  Or at least that was supposed to be the idea.

So twice weekly I sat through Military Science, learning the strategies necessary and the technologies available to maim and massacre as many adversaries as possible.  As the thankfully short course came to a conclusion, I found myself sitting in front of a final exam that consisted of one question, asking our response to a particular battlefield situation that we had covered.  In a moment of principled immaturity, I scribbled “We should lay down our arms and return home to our women and children.  Make love, not war.”  I am sure I had quite the self-satisfied grin when I dropped the paper on the commandant’s desk.

Now, I must reveal I failed the test.  Combined with the points I had accumulated for basically sitting there on a reliable basis, I earned a D on my first college report card – a first for me and apparently the first in the history of Military Science.  To some small degree, I took pride in this unique accomplishment.  I won’t pretend it was marching on Washington, but it seemed to at least qualify as taking a stand.

I have to admit that I also toyed with the idea of challenging the grade in front of the Student Congress, making the obvious argument that my solution of peace was better than any variation of war.  One evening I even poured over a Morals text with friends, constructing a logically sound case against the Military Science requirement.  And then one of my friends explained the “guns versus butter” stuff he was learning in Economics and I realized there was an even better argument than pure Right and Wrong.

“Put your money where your mouth is.”  It’s as good a saying as any to describe the American frame of mind.  In one way it means “shut up unless you back your opinion by investing effort.”  It also says something about our priorities; the idea that you spend your resources – your money, your time, your attention and your patience – in the areas that matter to you most.  And it’s a capitalist statement.  If you want to know what matters, look around and see where the money’s flowing.

So let’s talk about priorities for a moment, like the spending priorities as described in our 2010 Federal Budget.

Leaving out the $2 trillion dollars in “mandatory” spending for Social Security, Medicare, Medicaid and other fixed entitlement programs, take a look at the Discretionary Budget for fiscal 2010.

I don’t know about you, but those don’t look like the order of my priorities, how about yours?

Representing fully 58% of our Discretionary Budget, the Department of Defense is the obvious target.  Incredibly, with 46.5% of the world’s total in military spending, the US now spends roughly the same on “defense” as the rest of the world on combined.  Just wondering:  How many of you have guns or deadbolts worth more than your home?

Military spending outside our borders and the export of American wealth that goes with it is in large part responsible for the deficit spending we have experienced in the last decade.  I know a little about the value of a military base first hand, as I grew up right outside the gate of Wurtsmith Air Force Base in a family with deep service roots.  I saw first hand what it meant to the community’s economy when the base closed.  Though it might mean similar hardships in towns all over the world, but that’s our money and we need to keep it home.

Thankfully, President Obama has signaled that we will begin to draw down troops in Afghanistan in the coming year.  The problem is we don’t have a lot of examples where our ground troops have completely left a country once they set foot in it.  We are going to have a presence in Afghanistan for awhile.  But the Afghani’s are accustomed to it.  They’ve had people unsuccessfully trying to control their turf for about 2500 years. Our troops are reminded of these when they are shot at with rifles we gave the Afghani people when they were fighting off the Russians.

They say all politics are local and that is the first thing that comes to mind when I see the numbers.  When I hear that we are spending roughly $11 billion a month on active wars, it’s hard to bear that our State is slashing education spending by $2 billion for lack of funding.  I wonder how that school millage went in Basrah?

And while we are on the subject of “home,” lest anyone think I am anti-soldier:  when we bring Veterans back from war, their benefits shouldn’t be in the Discretionary Spending category.  More than anyone else, they have earned some certainty and this item must be switched to the Mandatory Spending budget line, where it belongs.

“Peace, Back By Popular Demand”

You don’t have to be much of a student of history to recall how it ended for the major imperial powers.  On the European continent alone you can find former greats like Greece, Italy, Spain, England and the USSR that are living a tier or two below their former status.  On the other hand, countries like Germany - who shot for the top spot and failed - and Sweden - who simply strove for fair and steady - are doing surprisingly well.

President Clinton used to talk about a Peace dividend.  He, driven by the priorities of the electorate, looked at military spending and scaled it back.  Our foreign interventions were few and we didn’t initiate any new major operations.  And we experienced one of the greatest periods of economic growth in our own storied history.  While this massive creation of value might not have been directly caused by the emphasis on productive private sector spending, it was at least coincidental with this period.

The idea that our Federal government is too large and spends too much on war is not a difficult one to grasp.  If not completely obvious, it seems completely supported by even a cursory review of the facts.

There is another less tangible issue at play that I would like you to consider.  One of the reasons that I have the cute story about Military Science and college is that my historically military family didn’t want me to go into the service.  The combination of Vietnam and the first hand experience with the waste and pretty power plays that are endemic to the services did it for us.

And that’s part of the problem.  Over time, there have been a fairly limited number of families that have consistently been there when duty called.  With each ill advised intervention, each fail result, we are shrinking this population – in part through mortal sacrifices like those described in my college class and in part due to those that just give up on the whole thing, getting tired of acting as a pawn in the public / private venture we call war.  We are going to need these guys at some point and we can’t keep using up their esprit de corps in pointless police actions.

The first time around, President Obama was elected on an anti-war platform.  It’s time for him to put our money where his mouth is.  Quit funding the wars.  Roll back military spending.  If we have to build schools and hospitals to keep our allies friendly, let’s do it on flat ground and not in a bomb crater. It’s cheaper in the long run.

President Obama, the conclusion should be obvious.  Forget your briefing papers for a minute and just steal a paraphrase from one of the prophets of 1980’s college rock.  “There’s real money in peace, love and understanding.”  It might not be exactly what Elvis Costello said, but it is what my neighbor said.  And my mom.  And my students.  And pretty much every other reasonable person with which I’ve broached the subject.

We’d really like you to finally retire George Washington and Ulysses S Grant from military service.  Because we’d really like to put those old codgers to work on our roads, schools and sewers.  Is that a promise you can make?  A peace promise – it just might catch on.