The Who: A Concert in Four Acts 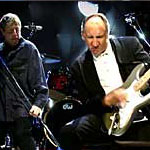 The flow of The Who's Sept. 29 Palace of Auburn Hills show, in part intended to promote the forthcoming Endless Wire - which will feature guitarist and songwriter Pete Townshend's latest "mini-rock opera" - had a theatrical flair all its own.

The two-plus hour show - the band's first Detroit-area appearance since 2002 - may not have been intended to have such a flair for the dramatic, but actually ended up comprising one concert in four acts.

The start of the show, while accompanied by streaming video, almost looked like a casual dress rehearsal. Singer Roger Daltrey - dressed in a blue T-shirt and jeans with a cup of tea in hand, and Townshend - wearing a buttoned-down shirt and black jeans - unceremoniously sauntered out onto the stage with "I Can't Explain." No lights, no flash. Just bright, white lights and sound.

At first glance, it appeared the band - now comprising of Zak Starkey, Ringo Starr's son, on drums in place of the late Keith Moon, and Pino Palladino on bass in place of John Entwistle, who died in 2002 - was set to burn out fast.

The revamped band ripped through much of its cornerstone pieces including "The Seeker," "Who are You" and "Behind Blue Eyes" in rapid fashion, but without the contagious on stage energy The Who made its name on.

"Real Good Looking Boy," a single recently recorded by the revamped band, was dedicated to Elvis Presley - an artist Daltrey said he admired growing up because no one over 20 liked Elvis in those days. While poignant, the dedication seemed out of place so early on in a rock show.

Enter the "mini rock opera," an art form first mastered by Townshend with "A Quick One While He's Away," which was followed by his full-length rock operas "Tommy" and "Quadrophenia." This time around it's "Wire & Glass," a mina-opera on the new album split into six songs. One of those songs, "Pick Up the Peace," was perhaps the opera's most lyrically powerful songs, performed during a time of seemingly endless war.

Starting with the explosive, keyboard-fueled "Baba O'Riley," The Who began Act III where most would have expected Act I to begin - with Townshend's trademark windmill ax slinging and the rock, rhythm & blues vocals Daltrey mastered 40 years ago.

The band steamrolled through "Eminence Front," one of the band's only 1980s hits, and extended, balls-out versions of "My Generation," "Won't Get Fooled Again" and "You Better, You Bet." The latter songs, three of the band's most intense, were by far the night's best performances, despite night-and-day stylistic differences between Moon and Starkey and Palladino and Entwistle.

The Who's encore, primarily consisting of a medley of songs from "Tommy," was equally as strong. Beginning with "Pinball Wizard," Townshend took his guitar playing to 1970s heights for his trademark rock opera, and followed suit on "Amazing Journey."

Daltrey's youthful vocals on "Go to the Mirror Boy" conjured images of the blonde, bright-eyed Daltrey in the 1975 film version of the rock opera.

The closing song, "Tea and Theatre," stripped the band down to Townshend and Daltrey alone on stage in an uncharacteristic and serene moment. The acoustic-based song closes Endless Wire, and dually closed the concert on a serene vibe.

Standing before the crowd wasn't The Who of 1960s English establishment rebellion. Nor was it The Who that gave the University of Leeds perpetual world renown, nor the band whose drummer drove a Cadillac into a Holiday Inn pool in Flint.

Sadly, the duet also reminded fans that The Who's groundbreaking foursome with Entwistle and Moon's larger-than life-drums would never be heard live again.

At the same time, Townshend's and Daltrey's triumphant stance in front of a jam-packed Palace made it clear neither is going anywhere, anytime soon.