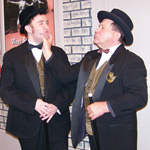 The Producers is arguably one of the most unusual musical comedies ever developed for the American theatrical stage. Adapted by comic genius Mel Brooks and Thomas Meehan from Brooks’ 1968 film of the same name, the story concerns two theatrical producers who scheme to get rich by overselling interests in a Broadway flop. Complications arise when the show unexpectedly turns out to be successful.

Indeed, given the recent not-so-humorous machinations of Wall Street investors like Bernie Madoff, who developed his own wicked web of Ponzi schemes to defraud investors; in a larger context, The Producers is somewhat prophetic in terms of how it taps into American inclinations that tend to drive the desperate; yet because Brooks is the type of auteur that derives his humor from the absurdity delineated by contrasting extremes, the humor of this show is accessible to a wide range of audiences, drawing upon ridiculous accents, caricatures of homosexuals and Nazis, and replete with many show business ‘in-jokes’.

The original production opened on Broadway on April 19, 2001 and ran for 2,502 performances, winning a record-breaking 12 Tony Awards; and in 2005 it was turned into a film version.

Now The Bay City Players are branding their own take on this comedic classic with a series of performances that run from April 22-25 & April 29 – May 1st. With a directorial team that consists of Tina Sills, Leeds Bird, Michael Wisniewski and Michael Dunckel and James Pawloski serving as musical director, the production stars Kurt Miller as Max Bialystock and Marty Hofelich as Leo Bloom, the two key protagonists in the production.

With such a storied history behind this production, what do the Bay City Players feel they can bring to this iconic play to make it fresh?

“We take our own approach, because anytime you take a big Broadway production to community theatre, the restrictions of budget, facilities, and mechanics makes you adjust it,” reflects Leeds Bird. “The biggest problem with shows like this is that we have moderate wing space and are trying to give full credit to a show within the framework of what community theatre can do.  The upside is that I’ve seen professional productions that I didn’t care for because of the lack of intimacy. With community theatre there is more intimacy, the ability to get more personal, share more with the audience, and consequently have more fun.”

Not to say the production team has not experienced their share of challenges. Tina Sills who was originally slated to direct the show started having a health problem, and then one of the assistant directors had to have a knee replacement, meaning that Leeds & Michael Wisniewki has to step forward to tackle directorial duties, while also having featured roles within the production.

“We had a good deal of younger people try out for roles and many mainstays of the theatre signing on for smaller character and side parts that normally take on lead roles, simply because Mel Brooks name was involved and they love him,” notes Leeds. “We had to work doubly hard, but this is one of the most cooperative casts I’ve worked with in ages.

Given that Brooks is definitely a New York ethnic oriented director, was it challenging getting the actors to fit within various stereotypical ethnic frameworks? “We’ve tried to make the cast aware of the fact this musical is not modern in the sense that it hails from the notion of the 1920s-30s-40s musicals and is more a musical comedy, which is vastly different than musical theatre,” notes Leeds. “By the time Sondheim arrived on the Broadway stage in the 1950s, musical comedy stopped and it transformed into musical theatre.”

“In 2001 when this show opened a lot of critics expressed the feeling that America was ready for something ‘politically incorrect’”, he continues, “and Mel Brooks was more than glad to insult everybody. When performing larger that life characters you have to be careful about laughing to yourself, or letting the audience know what you do is funny, because then they won’t find it funny. So basically, you need to play it for truth and not realism - like a New York Jew in France during the Revolution. It’s incongruous and improbable, so you can’t go for realism but truth in many of these scenes.”

Given that in many ways Brooks is a joke writer, was it difficult gleaning proper timing out of the cast, which is a critical element?

“Our cast is extremely adaptable,” comments Mike Wisniewski. “Kurt Miller – who plays Max – is a Mel Brooks nut and can get into parts of Brooks’ History of the World Part 1 and memorize it line for line. Other actors pick up that passion. The key is to say the line up to a point and then say the last part of it looking at the audience, because that’s where the joke is. For the most part the cast has been very good. Leeds and I tend to have the same words come out of our mouths when we comment, so it’s been a funny and intuitive relationship, co-directing this play.”

For many people, Mel Brooks is similar to Woody Allen in the sense that both are acquired tastes that not everybody is receptive towards. Yet The Producers enjoys such a broad popularity, what distinguishes this work from Brooks’ other work that make is so broadly appealing?

“The was the second movie that Brooks wrote and directed, so I would suggest that he was a little more cautious with it,” reflects Leeds. “There are noticeable changes from the original movie and the musical; strong big changes in the Hitler character, which is far more involved, that is not quite as clear in the original film.”

“We’ve been told that Mel wanted to hand this play to someone else to do, because he didn’t think that he could write a Broadway musical. He does songs, which is why he has a co-composer; but they’re stolen from some of the best songs written for Broadway shows and adjusted for this production.”

“I think he was more careful and deliberate with The Producers,” continues Leeds. “Whenever he had doubts he spoke to Anne Bancroft – who was his wife – and she knew formulas that worked. It wasn’t just shtick, showgirls and catchy songs. It was about developing a pattern that fits musical comedy – which is the one true American theatre form. Nobody else in the world does it. The French & British do musical theatre, but this is full blooded red, white & blue, even though he insults must about everybody – but that’s an American tendency as well.”

“Yet think about it. What better way to speak out against radical people like Hitler than to ridicule them?”

“The idea is to be true to the intent. You can’t touch the budget of these big Broadway musicals, so you have to explore the nuances of fun that are there to be had.

I don’t believe in ‘Hell Week’,” concludes Leeds. “Many directors one week before an opening will suddenly add props, lights, all the elements, and then the cast falls apart. I believe in adding one new element each week, so Hell Week is just a normal performance condition during rehearsals. This makes everybody more secure and I know we’ll be in good shape on opening night.”

The Box Office for The Producers Opens April 15th. You can purchase tickets by going to baycityplayers. Com. Performances are April 22-25 and April 29 – May 1st.