The Life & Times of Albert Hofmann

Unlocking the Doors of Perception 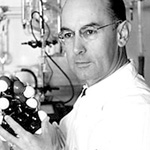 Swiss Chemist Albert Hofmann, best known as the scientist who synthesized lysergic acid diethylamide (LSD), died of a heart attack in the village of Berg in Leimental, Switzerland on April 29th, 2008 at the ripe old age of 102. Each year since the media recites the story of Hoffman’s scientific research that led to the creation of his “problem child.”

His breakthrough discovery of LSD-25 in 1938 may have been just a lucky accident, especially as it was accomplished in a modest starched shirt environment that focused strictly on research. The goal of Hofmann’s scientific study at Sandoz Company’s laboratory in Basel, Switzerland was to obtain a respiratory and circulatory stimulant (an analeptic) by investigating the chemical and pharmacological properties of ergot.

LSD was the 25th in a series of ergot derivatives that Dr. Hofmann prepared – thus LSD-25 was created - and it was a quantum leap from the original intent of the study. Preliminary work about its effects on animals proved inconclusive, so it was set-aside for five years as Hofmann pursued other projects.

Louis Pasteur once said that luck is granted only to those who are prepared. Dr. Hofmann was the right person at the right time - perhaps he was the only person who could have influenced the events that led to popularity and the myth of LSD. One might say he was a visionary.

Hofmann concluded his chemistry studies at the University of Zurich in 1929 and chose Sandoz over other offers because it allowed him to work on “natural products” as opposed to working in the field of synthetic chemistry.

He possessed a bold inquiring mind that was well suited to medical investigation. Dr. Hofmann was charged to isolate active principles in known medicinal plants to produce pure specimens of these potentially life altering substances. This was particularly tedious work when active principles are unstable and the potency is subject to great variation. In pure form these active principles can be manufactured as a stable pharmaceutical preparation, quantifiable by weight and sold by a prescribed dosage.

So the discovery of LSD was not an accident at all. It was planned research. The “accident” occurred on April 16th, 1943 when Hofmann decided to give LSD-25 another inspection. While re-synthesizing the substance, he accidentally absorbed a quantity through his fingertips and discovered its transforming effects, which he described at the time as “a remarkable but not unpleasant state of intoxication…characterized by an intense stimulation of imagination and an altered state of awareness of the world.”

Three days later Dr. Hofmann intentionally ingested 250 micrograms of LSD-25, thinking such a small dosage would have only a marginal effect. This is what he discovered as he bicycled home accompanied by a laboratory assistant:

“I had great difficulty speaking coherently. My field vision swayed before me and objects appeared distorted like images in curved mirrors. I had the impression of being unable to move from the spot, although my assistant told me afterwards we had cycled at a good pace.”

He reported feeling lost in the twisted corridors of inner space and feared that he was losing his mind:
“Occasionally I felt as if I were out of my body…I thought I had died. My ego was suspended somewhere in space and I saw my body lying dead on the sofa.”

Hofmann proved courageous and resilient enough to endure the effects of this “bad trip.” As the ordeal wore on, his “psychic” condition improved dramatically and he was able to calm and observe the psychedelic effects on his five senses. He reported a fitful night of sleep but awoke the next day feeling fine.

Dr. Hofmann sensed that his discovery could be an important tool for studying the mind, but he had no idea that LSD would become such a transformative socio-cultural linchpin across the planet from the sixties to the current day.

There were several brave psychedelic pioneers that advanced the cause of internal freedom, the freedom to expand and contract one’s own consciousness, whether naturally through prayer, meditation and yoga or through chemicals such as mescaline, peyote or LSD.

Captain Alfred Hubbard, known as the Johnny Appleseed of LSD, may have been the most unlikely advocate. He was a former member of the OSS in World War II and a political conservative that despised the longhaired hippies. But he is widely recognized as the first person to recognize the potential for LSD to be a liberating and transcendent drug. He preached the LSD gospel to most everyone he met – a true missionary zeal that few could match.

It was Hubbard who contacted another obscure but strategic person in the saga of LSD, Dr. Humphrey Osmond, a British psychiatrist who was using LSD and mescaline at Weyburn Hospital in Saskatchewan, Canada. Dr. Osmond was researching the use of these substances on people experiencing mental illness and psychosis and he gained a modicum of fame by demonstrating the structural similarity between mescaline and adrenaline molecules suggesting that schizophrenia may be a form of self-intoxication caused by the body making its own hallucinogenic compounds.

Osmond objected to the typical LSD psycho mimetic research design that viewed the LSD experience as similar to psychosis. Dr. Osmond noted in his work with alcoholism that many of his patients reported the LSD sessions as insightful and rewarding and that LSD did not elicit psychosis. Osmond did not accept the biased lexicon (e.g., hallucination) typically used in scientific journals to describe LSD experiences.

He corresponded with his friend and colleague Aldous Huxley who agreed that they must find another, more accurate word to describe the effects of mind-altering drugs. Huxley proposed the term, phanerothyme (meaning spirit or soul).

He sent the following couplet to Osmond:
To make this trivial world sublime
Take half a gramme of phanerothyme

The word psychedelic was born and it was introduced to the psychiatric community in 1957. In a few short years it gained an almost universal expression in the counterculture movement in America and influenced artists, doctors, psychiatrists, academics, musicians, poets and artists across the globe.

In August 1961, Hofmann met with author Aldous Huxley for the first time. He was familiar with Huxley’s early groundbreaking work Brave New World and found that Doors of Perception and Heaven and Hell provided him with a deeper insight into his own visionary experiences.

They became friendly and in the following year, Huxley released his last book, a novel entitled Island. The story is set on a utopian island in which a natural and magical medicine “moksha” played a significant role in the life of the island people. Moksha is Sanskrit for release and liberation. Huxley sent Dr. Hofmann a copy of Island with this inscription: “To Dr. Albert Hofmann, the original discoverer of moksha medicine, from Aldous Huxley.”

Aldous Huxley died on November 22nd, 1963 (the day of President Kennedy’s assassination) from throat cancer. Per Huxley’s request his wife Laura injected him with 100 mgs of LSD – his moksha medicine - and he peacefully let go of his life in perfect harmony with death.

Perhaps the most iconoclastic figure in Albert Hofmann’s acid dream is Dr. Timothy Leary. Dr Leary was a noted clinical psychologist who helped create the theory of Transactional Analysis in which the relationship between doctor and patient was forever changed (at least in some circles of psychotherapy).

His notion of equality in the treatment relationship altered the conceptualization of engaging in therapy and how change occurs in treatment. Although the medical model of psychotherapy was decades away from embracing evidenced based practices, Leary’s elegant formulations brought him a considerable notoriety before he began his psychedelic studies at Harvard in the sixties.

Richard Nixon once called him the most dangerous man in America, all for espousing the internal freedom to expand and contract one’s consciousness. Leary called it the 5th Freedom – the right to get high and he encouraged us to tune in, turn on and drop out. After losing his position at Harvard for supplying LSD to his students, Leary continued his psychedelic studies at Millbrook Estate. He became a darling of the counter culture and mingled freely with the young rock-gods from John Lennon to the Grateful Dead. However, Leary’s carelessness caught up with him and he and he spent several years eluding the law before a brief incarceration.

LSD was first introduced to the United States in 1949 and was the darling of the scientific community as well as the political elite and the wealthy. It was used effectively with hard-to-treat psychiatric conditions such as sexual aberrations, alcoholism and psychosis. The CIA and the military embraced it as a possible torture and mind control agent (MK-ULTRA).

By 1965, the medical use of LSD fell in disrepute despite evidence of its effectiveness. By 1966, Sandoz laboratory discontinued its marketing of LSD due to the sudden dearth of research devoted to its use. In 1970 the Bureau of Narcotics and Dangerous Drugs placed LSD in a Schedule I category denoting it as a drug of abuse that has no medical value.

The number of young people using LSD today is about the same as it was in the sixties and seventies. In a study conducted by the Michigan Institute for Social Research, 13.6 percent of all high school seniors graduating in 1997 had tried LSD and 49.6 percent tried marijuana. A 2006 Substance Abuse Mental Health Administration (SAMHSA) study revealed that 23 million Americans aged 12 and older experimented with LSD.

There has been little interpretive analysis of this data though some theories suggest the link between music, drugs and the natural alienation of youth. To me this analysis seems too easy, too simple minded to have any merit. There is no mention in current literature of LSD use as a serious medicine, though there is some discourse that allows that LSD is illegal simply because it threatens the dominant culture, a culture of fear and control.

Albert Hofmann’s research has cast this “problem child” in another light, as a psychedelic medicine that could potentiate a shift from our current culture of poverty and violence to peace, spirituality and expanded consciousness.

It is a question without an answer.

What more can a person gain in life
Than that God-Nature reveals itself to him?
- Goethe