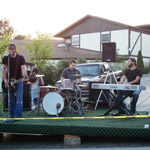 The Honky Tonk Zeros are hands down the best new band in town. They rock like Steve Earle blastin' out the now revolution and they got the soul of Billy Joe Shaver without preachin' the good ol' boy gun-totin' gospel. They are country outlaws like Waylon and Willie with an edge, somewhat like David Allen Coe minus the incoherent ghostly biker chic.

Before all this they were just a bunch of gay cowboys but they got their act together, learning their craft, listening to the warm oompa of sepia toned Bavarian sounds in the east Bronnerville ghetto where dusty street urchins pushed life sized sock puppets of Tiny Zehnder. The tension between the landed gentry and the indentured servants provided just the right combination of social distortion and class rebellion to create a new kind of music - Rockabilly Country, Rhythm and Blues.

The Zeros are the progenitors of this hybrid form of musical rebellion and they have something new to say - only it's based in a shared past. Guitarist/singer and chief songwriter, Charlie Klein explains that his songwriting was inspired by listening to some of the legendary blues and rockabilly cats, "The songs all have a bass pattern alternating between the root and the fifth that is the basis for songs like Merle Haggard's Working Man Blues, That's All Right Mama by Elvis and Muddy Water's Mojo Working - if you listen closely you'll find they're all the same song!"

Charlie is the focal point of the Zeros and crafts music that is fresh despite its salute to that killer root/fifth combination and the influence of icons such stalwarts such as Billy Joe Shaver, Jimmy Rodgers (the blues guy), Dwight Yoakam, Muddy Waters and Johnny Cash. Inspired by the spirit of Tom Freeman and the style of Eddie Spaghetti, Charlie found his voice and learned to create something vital - from his center, his heart; music that eschews formula and rip-off patterns.

Charlie explains Nashville's current creative torpor, "Now you gotta write about country, instead of life. They're stuck in the image of what their music should be."

The Zeros brand of country hits the traditional crowd like playing Charlie Parker at Emo showsŠbut not quite. These cats can get rootsy, pound out 12-bar blues then rock your socks off. In fact, they can play just about anything. The breadth of their vision creates an unusually rich musical landscape.

Charlie sings a rough tenor reminiscent of Glen Frey on Heartache Tonight and opens up and gives himself completely to his songs like he would his best gal.  He's a master at the heartbreak motif - reflected in the emotional depth of his original compositions - such as the insistent Girl in a Bottle, a blues shuffle with a cool descending guitar line and hurt/angry vocal.

He hits the mark with How Do You Look Him in the Eye that is just as lyrically direct and honest as "Bottle" but not as desperate or passionate as Love Turns Tragedy.

Hank Williams is King just may be the masterpiece - the crème de crème - of Charlie's impressive catalog of original music. This is an unabashed no-holds-barred break-my-heart tribute to country music's very first cow-punk outlaw rebel. Charlie fashioned a sparse mid-tempo arrangement, just guitar, bass and drums to give it an old-time country feel and he sings it in a tortured rasp and a cry in his voice that is reminiscent of old' Hank himself. Iris from the Temporary Limbs once asked Charlie to "play that one song of yours that's sad". It is sad, alright - and brutally honest.

This is song about a broken hearts and broken dreams and a real need to stand outside the pain, singing along to Ernest Tubbs's western swing or Bob Wills' ah-ha and every single sad song that helps you forget yet allows you to hold that feeling.

Charlie sings about finding a juke joint where Hank Williams is King - where heartaches and memories are checked at the door; where no one plays rent and no one keeps score. The song is a bonafide world-class original that comes from the writer's center and has an authenticity and musical integrity that rarely dents the charts.

A typical set may include the above originals with a few well-placed covers including Billy Joe Shaver's Ride Me on Down Easy; a Jimmy Rodgers' blues workout like Chicago Bound; the Crow Medicine Show/Bob Dylan/Cash O' Riley song Rock Me Mama; or the folk-blues/seeds and stems vibe of After the Judgment's Gone.

This is not an overnight success story - the Zeros have been together as friends and comrades in arms since 2004. And Charlie's been in and out of bands, trading chops with Whitey Morgan and learning the gospel at the historic Wagon Wheel. He's performed several high profile gigs at The Machine Shop and lit a fire with Chris Zehnder and the Avery Set.

Charlie recalls his first band the Brotherhood, "We spent three years suffering, getting nowhereŠand then we succeeded. We knew we made it when the wait staff and the bouncers stopped what they were doing and listened. That 1st band is still in my heart."

The Zeros play in a continuous feedback loop between the past and present, recalling the masters with an exuberance that has not yet been tamped down by the demands of the bar band market, the sixth ring of musical hell - they don't play Margaritaville yet. Thank god!
Fresh, strong and ready to take on the world - they are no one's fool. Their wisdom is born of the ages evoked in our collective unconscious and channeled through their savagely spiritual earth music, meant for the faithful and subversive who believe in creativity and appreciate original music.

Zeros songs are short to the point and filled with pent up energy and rage against the machine.

Go ahead, reach out and get a dose of that down home and dirty Rockabilly Country, Rhythm and Blues. The Honky Tonk Zeros will set you free.