Launches 4th Season with a Spotlight on Virtuosity 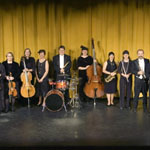 The title of this show is a tongue-in-cheek pun based on the title of an old Irving Berlin song and the name of a popular book from the early 70s. "The piano and the sax are two of the instruments of The Bijou Orchestra," laughs Neo Najar, artistic director of The Bijou. "We thought it would be a fun hint of our musical offerings on this exciting program. The focus of this concert is on the virtuoso members of the Bijou, all of whom will be featured in orchestra favorites and several of whom will also be featured as soloists."

"The Bijou is unlike any other orchestra in the Midwest," reflects Najar. "Our repertoire puts tremendous demands on players since this is the only place they play any of the difficult arrangements that we feature. It takes a certain kind of musician to add this challenge to a busy schedule of performing and teaching. I thought the audience would like a chance to hear some of them featured as soloists."

The Bijou will also get a workout on several virtuoso ensemble numbers including Overture to a Midsummer Night's Dream by Mendelssohn, The Evolution of Dixie by Mayhew Lake, Beethoven's Fifth Symphony and a "couple of surprises as well," according to Najar.

According to Najar, the upcoming season for The Bijou will consist of three concerts in the Labadie Bijou Pops, a family Halloween SPOOKtacular at the State, and the fourth annual Holiday Pops to be given at Bay City's historic First Presbyterian Church.

Following this debut performance, the second concert in the series takes place the weekend of October 14 and 15. The Movies Learn to Sing explores the music that was heard in the earliest sound pictures from the late 1920's through the first few years of the 30's.

The third Labadie Series concert is called While Vienna Waltzed and will be given November 18 and 19. Everybody knows Vienna was dancing Strauss waltzes at the end of the century, but have you ever wondered what kind of music was popular in London, Paris, New York, and Detroit or for that matter, Bay City at that time? The program is a worldwide sampler of popular music from the end of the 19th century into the beginning of the 20th.

The regular concert season concludes with Holiday Pops IV on December 6 and 8. The program will be given for the first time this year in the beautiful sanctuary of First Presbyterian Church, Bay City. The concerts are a rich mixture of traditional and popular holiday music performed by a variety of forces including chorus, vocal soloists and a variety of special guests. The annual Klezmer set is a highly anticipated part of this popular show.

The Bijou Orchestra takes its name from the Bijou Theatre, one of the earliest Bay City theaters, which later became known as the Bay and eventually the State. The ensemble is composed of thirteen outstanding musicians drawn from Michigan and beyond to perform in this challenging medium in which every player is a soloist.