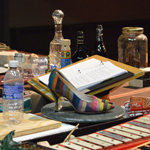 When it comes to the Christmas holiday functioning as an inspirational vehicle for the performing arts, few productions can top It's a Wonderful Life  - the classic  Christmas drama produced and directed by the legendary Frank Capra, that was based on the short story The Greatest Gift, written by Philip Van Doren Stern in 1939 and privately published in 1945.  The film is considered one of the most inspirational and best loved movies in American cinema.
Released in 1946, this tale about George Bailey - a man who has given up his dreams in order to help others, and whose imminent suicide on Christmas Eve brings about the intervention of his Guardian Angel Clarence, who shows George all the lives he has touched and how differently life would have been in his community had he not been born, truly crystallizes all the important elements that tend to surface during this time of the season.
However, prior to the film version, It's A Wonderful Life was twice adapted for radio in 1947; and in 2006 Philip Grecian constructed a radio play based upon the film, which is now in its third incarnation and will be presented by The Bay City Players  on November 30, December 1-2 and December 6-9th. Tickets are available by phoning 989-893-5555 or by going online to baycityplayers.com.
Indeed, the origins of this timeless classic are intriguing. After being unsuccessful in getting his original story published, author Philip Van Doren Stern decided to make it into a Christmas card, and mailed 200 copies to family and friends in December, 1943. The story came to the attention off RKO producer David Hempstead, who showed it to Cary Grant's Hollywood agent, and in April 1944 RKO Pictures bought the rights to the story for $10,000, hoping to turn it into a vehicle for Grant. RKO created three unsatisfactory scripts before shelving the planned movie, and Grant went on to make another Christmas movie staple, The Bishop's Wife.
Obviously, It's a Wonderful Life is one of the most beloved films of modern American cinema; but for those unfamiliar with the 'Radio Show' version, there are a few factors that distinguish this stage presentation from the cinematic version.
According to Director Elizabeth Dewey, “This particular version was adapted by Philip Grecian, who also adapted Jean Shepherd's A Christmas Story for the stage and has written other radio dramas as well.  The story has been streamlined a bit, with the angels providing a bit of narration and back-story.”
This Bay City Player's production of It's A Wonderful Life - Radio Show is Elizabeth's eighth show as a director or assistant director for Bay City Players. Plus she has worked with a number of other college and community theatres over the years in roles ranging from directing to scene-shifting.
“The fun and challenge of a show like this is that it is so purely aural without being 'reader's theater',” she explains. “The actors all play multiple roles and the sound effects are all executed live on stage, using old-time techniques. There is not much stage action per se, so the sound effects technicians with all their gadgets and devices provide much of the visual delight.”
When asked what the most challenging component  is involved with successfully rendering this work for the stage, Elizabeth notes that “As with any show, it's getting all the elements together: actors and music and lights and costumes; and in this case, sound effects!  The whole cast and crew has been working and having fun creating different voices and collaborating on all the sound effects. We have rattled many different sheets of wood, plastic, and metal looking for the ideal 'thunder sheet'!”
Elizabeth also adds that she was thrilled with the individuals that auditioned for this production. “There were many very experienced people whom I had worked with before along with a number of relative newcomers,” she notes. “Casting new people is one of my favorite things to do with a show. The veterans have been mentoring the newer people on theatrical techniques and jargon and jokes, which makes my job much easier. Everyone is intrigued by the challenges of this show.”
John Tanner, who has played many roles in Bay City & Midland over the years, stars as Clarence the angel; while Jim Stewart of Midland performs the role of George Bailey, originated by the more famous James Stewart of cinematic fame.  And for a fine example of how community theatre can function as a family affair, Kurt and Judy Miller perform multiple roles in this production, while their daughter Emily Haubenstricker stars as Mary, with Emily's son Hayden Haubenstricker acting in two children's roles.
When asked about elements involved with this production that audiences will find most appealing, along with factors that make this stage version engaging and funny, Elizabeth focuses again upon the sound effects. “The execution and deployment of the sound effects and the aural nature of the performance are what will draw people in. The writer says that at some point of their original performances, they were worried because people in the audience had their eyes closed! The actors were afraid that the audience was sleeping, but people said they were just shutting their eyes to focus on listening and letting their imaginations work.  I'm betting we'll see some of that, too.”
“Everyone loves a favorite story, and new versions bring fresh delight in them,” concludes Elizabeth. “Whether people are fans of the movie, old enough to remember radio theater, or looking for a family event for the holiday, they will enjoy It's a Wonderful Life.”