Evolution of a Destination Point in Downtown Saginaw 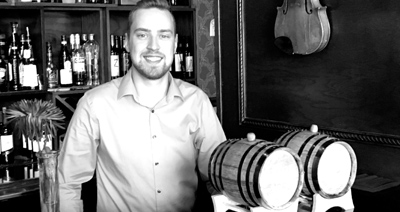 Since first opening 18-months ago, The Bancroft Coffee & Tea and Bancroft Wine & Martini Bar have managed to revitalize Downtown Saginaw with an embracing mixture of unpretentious hospitality, fine carefully crafted beverages, innovative food items, and creative entertainment opportunities, which has spear-headed a renaissance of attention and activity in the downtown corridor.

Located at 101 S. Washington Avenue, recently the Coffee Shop and Wine & Martini Bar were purchased by new owner Ryan Seifferlein, who’s involvement with the project dates prior to its initial opening; and who has brought a forward-looking and committed vision towards fostering these entities into an evolving & increasingly successful operation.

Originally from the Marlette area, Sefferelein decided to migrate to Saginaw several years ago and bought his first house on Bond street, right off Weiss. “I went to school for accounting and got into real estate, working at Starbucks while I was going to school. When the Bancroft Project first opened I instantly became interested in the entire project and decided to buy a house Downtown,” he explains.

Always supportive and drawn to Saginaw’s East Side, Ryan contacted the Bancroft’s first operations managers, which evolved into him managing the Bancroft Coffee Shop. “I brought five of us from Starbucks, but also left on good terms with the management,” he notes. “I was so excited about what was happening with the Bancroft that I wanted to be part of it.”

Six months into his involvement the Assistant Manager left, so Ryan moved up to that position; and through his commitment and openly honest enthusiasm for both the Bancroft Project & the downtown area, kept moving up.  Eventually he became manager of the Bancroft Wine & Martini Bar and quickly started evolving both the traffic as well as improving the caliber of food, drinks and services being offered.  And to pledge his commitment to the operation even further, he recently navigated a workable deal to assume ownership of this significant component of the operation.

“I’ve been involved with the Bancroft two weeks before it first opened, and spent 4 years at Starbucks, so had some pretty good ideas formed about what to do and what not to do with the coffee shop,” he reflects. “I believe in high quality service and am not real corporate-inclined, so my goal is to project an  up-scale, courteous, people oriented service approach.”

One of the first changes made at the Coffee Bar was to feature locally produced coffee, which it did not do in the beginning. “I decided to work with Thunderbrew Coffee because they were closing their café and looking to distribute it; but most importantly, they provide a really good product and buy fair trade. I love buying local and like to foster a laid-back environment.  We offer really good lunch & brunch options and are an excellent place to conduct breakfast & lunch meetings.”

“Many people and groups don’t have meeting spaces, but we have a very nice and intimate meeting space available that holds 12-peope that we don’t charge for. All you have to do is buy your coffee, which we switch up quite frequently. We always offer seven different coffee options at any one time and can produce 50 different specialty coffee drinks, given the collective knowledge of all our baristas,” he explains.

While their lunch crowd tends to be larger than the breakfast crowd at this current juncture of the operation, Ryan has added several other amenities such as take-out beer & wine. “People can get beer and wine from 7 am through the evening hours, and several people working third shift have been utilizing this service.”

“We’ve also been expanding our menu and creating more options for people,” adds Ryan. “I would like to get different book clubs and community groups coming here for their gatherings. We’ve done parties for 30 to 40 people for lunch and have a nice private space for uninterrupted meetings; and people can also have an opportunity to tour the entire building.”

Without doubt, however,  the biggest changes & improvements happening at The Bancroft over the past year have centered around the Wine & Martini Bar.  “The staff has been here for so long we don’t have a high turnover,” notes Ryan, “and to me that’s important because that can be a make or break issue for a lot of businesses.  I’m fortunate to have a really qualified staff of 14 people, 10 of whom have been here for at least 18 months out of the 2-years we’ve been open.  Our consistency is the best thing, especially with the quality of our beverages and making sure we don’t run out of items.”

Perhaps the most critical component involved with the overall improvement is the willingness to embrace looking at the operation with a critical eye. “To my mind the key is to take a hard look at whatever you are engaged with an eye to seeing what it is you are doing wrong,” states Ryan. “At first the biggest complaint we received was not being greeted upon entrance, so we added a host into the mix. The second problem was time of service, so we’ve learned how to get that down to a science. This can be more difficult when preparing specialty drinks containing a dozen ingredients. People need to remember that with craft cocktails, it takes a bit of time to muddle cherries and mints; but essentially preparation is important, so we keep things moving as swiftly as we can without sacrificing quality.  There’s nothing worse than waiting and getting a bad cocktail.”

With at least 100 wines featured on their 4-page menu, a majority of the stock is derived from both Michigan and Napa Valley. “I’d like to feature more local wines, but we offer a broad spectrum; and where Michigan wines fit into certain categories, I want to feature as many as we can that are of good quality.”

“My chief goal over the next six months is to brand the Bancroft as a place for the community to gather and have a great time,” reflects Ryan. “We’re doing everything in stages and our entertainment and special events have helped get more consistent flows of traffic into the downtown. I want to get people thinking of Downtown Saginaw as a destination point, especially with fellow entities such as The Savoy, Dawn of a New Day, Bradley’s Bistro, and The Temple all happening.”

By featuring top local musicians such as Jim Perkins, Noel Howland, John Krogman, Laurie Middlebrook, and The Jim Pagel Jazz trio regularly on Wednesdays and occasional Saturdays, the Bancroft has decidedly built its reputation as a wonderful musical showcase in the region; and Sefferlein says he would like to expand the focus by offering a kiosk at the Bancroft where artists could sell their CDs and merchandise on consignment   “I’m amazed at how many good musicians want to perform here and I enjoy it because it makes downtown feel alive,” he enthuses.

As for the elegant Crystal Ballroom, Ryan notes that its doing well and states he would like to conduct more fundraisers and community parties there in the future. “CMU had their residency graduation in the Crystal; and we rent it out for many wedding receptions, and I’m really pleased that next year its booked every weekend from June through August, which means I can add 3 to 4 more people to the staff.”

“All people need to buy is the liquor package when they secure the Crystal,” he continues, “and they can use any caterer they want. We offer a package for every budget and can accommodate up to 250 for a seated event, or 300 with cocktail tables.”

Another neat feature is that for people living at the Bancroft Apartments, which is at close to 95% occupancy, they can also obtain free room service to anybody living in the building.

“With the Martini & Wine Bar my biggest goal is to make it a place where everyone feels welcome,” concludes Ryan. “We offer good service, a solid mix of cocktail and entertainment, and the environment we create is different.”