The Sugar Beets tied the game when Noah Marcoux smashed a 3 run HR to cap a 7 run rally in the fifth, before Marcoux added an RBI single in the seventh to tie the game again... 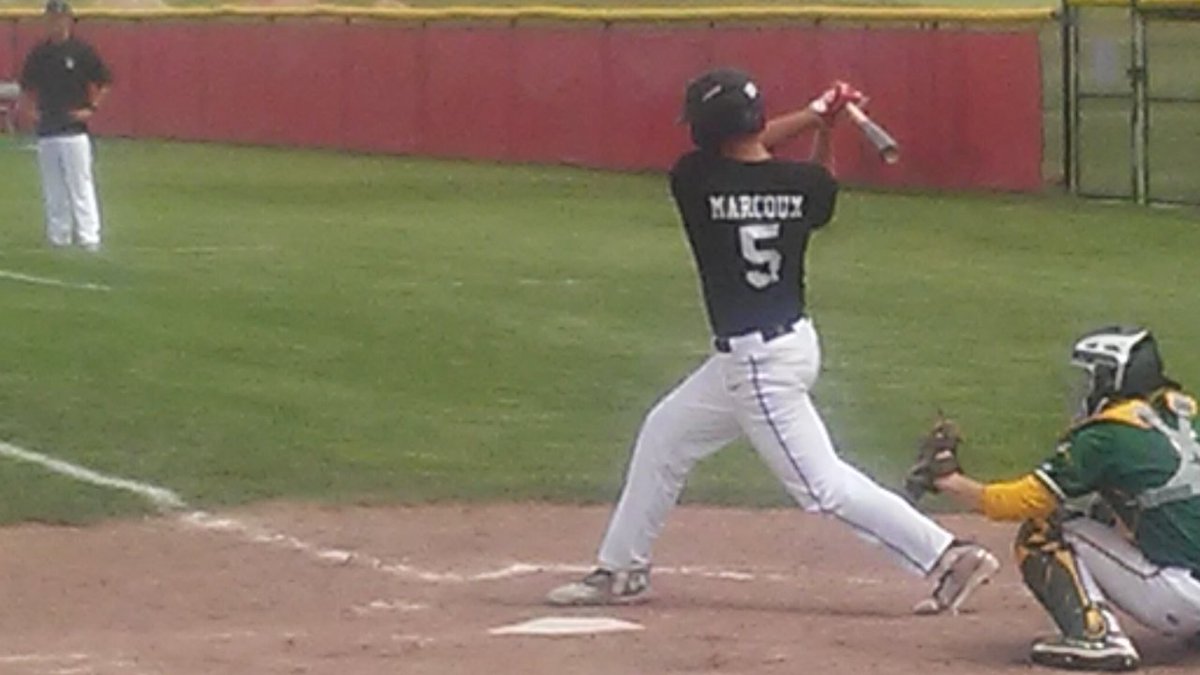 Tecumseh, ON:
In its inaugural season in the Great Lakes Summer Collegiate League, the Saginaw Sugar Beets (2-1-0) battled back from a 7-run deficit with a big 7-run fifth inning to tie the game at 8-runs apiece, before clinching the 2018 GLSCL Northern Division Championship (best of three) series (2-games to 1-game) with a 10-9 road victory over the St. Clair (Windsor, ON) Green Giants (1-2-0) at Lacasse Field in Tecumseh, ON tonight.
The Sugar Beets now advance to the 2018 GLSCL (best of three) Championship Series against the Southern Ohio Copperheads (who advanced to the finals by sweeping the Hamilton Joes 2-games to zero in the Southern Division Championship Series with a 4-3 victory on Friday night) while Saginaw will now host game-1 of the finals at Merrill High School in Merrill, MI at 4:05 pm on Sunday afternoon, before the Copperheads (with home-field advantage due to having a better regular season record) will host game-2 and game-3 (if necessary) at 7:05 pm at Bob Wren Stadium in Athens, OH on Tuesday and Wednesday, following a travel day on Monday.
Saginaw took an early lead in the first when shortstop Cooper Marshall (Western Michigan University) belted a solo home run, his first of the playoffs (8th overall) for a 1-0 Sugar Beets lead in the top of the first inning, however, the Green Giants would answer with 5-runs in the bottom half of the inning, followed by  2-runs in the second, before adding another run in the third inning to take an 8-1 lead after 3-innings of play.
Trailing 8-1 heading into the fifth, the Sugar Beets kicked off a big rally when third baseman Ryan Robinette (Lawrence Tech) was driven in on an RBI-double by Beets' RF Gaosh Williams (Central Michigan University) while Marshall scored on a bases loaded walk to third baseman Daniel Page (Hofstra University) before Saginaw CF Jacob Crum (Central Michigan University) drove in Williams and Sugar Beets second baseman Connor Charping (Western Michigan University) with a 2-run double to cut the St. Clair lead to 8-5 with just 1-out, which set the stage for Saginaw first baseman Noah Marcoux (Davenport University) who crushed a 3-run home run (his first of the playoffs, 8th overall) to tie the game at 8-runs apiece in the top of the fifth inning.
The Green Giants regained the lead in the sixth when St. Clair DH Miguel Cienfuegos (Northwest Florida State College) reached on an error, which allowed third baseman Gibson Krzeminski (Iowa Western CC) to score for a 9-8 Green Giants lead in the bottom of the sixth inning.
The Sugar Beets battled back to tie the game once again in the seventh when Marcoux drove in Crum with an RBI-single, knotting the game at 9-runs apiece in the top of the seventh inning, before Saginaw eventually added the winning run in the eighth when Robinette scored from third after St. Clair pitcher Stephen Streltzoff (Arizona Christian University) overthrew second base while trying to pick-off Williams, who was stealing, which would give the Sugar Beets a 10-9 lead for good in the top of the eighth inning.
Green Giants starter Gage O'Brien (Paradise Valley CC) gave up 8-runs on 9-hits and 1-walk, with 6-strikeouts through 4 1/3 innings, while right-hand reliever Travis Snyder (Kalamazoo CC) was on the hook for 2-runs (both unearned) picking up his first loss of the playoffs after allowing just 3-hits and 1-walk, with 3-strikeouts through 3 1/3 innings of relief, as Streltzoff managed to strike out 4-batters throughout the final 1 1/3 innings, despite committing the error which led to the go-ahead run in the eighth.
Saginaw starter Matthew Blunk (Lawrence Tech) gave up 3-earned runs on 5-hits and 3-walks, with 2-strikeouts through 2-innings, before he was replaced by Sugar Beets' right-hand reliever Jordan Williams (Adrian College) who finished with a very strong performance to earn his first win of the playoffs after allowing just 4-hits, while striking out an impressive 8-batters throughout the remaining 7-innings for the Sugar Beets tonight.
Marcoux was 2 for 5 with 4-RBI's including his first HR of the playoffs to lead the Sugar Beets' offense tonight, while Crum finished 2 for 5 with 2-RBI's and 2-runs scored, followed by Marshall, who was 2 for 6 with his first HR of the playoffs, and Robinette who was 2 for 5 with 2-runs scored, along with Ryan Missal (Western Michigan University) who was the fifth Saginaw player with two hits, finishing 2 for 5 tonight.
The Sugar Beets will now welcome the Southern Division Champion Southern Ohio Copperheads for the opener of the 2018 GLSCL Championship (best of three) Series at Merrill High School in Merrill, MI with the first pitch set for 4:05 pm tomorrow afternoon.