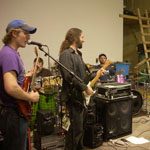 When musician Chris Wiley Smith caught the ever ambitious and prolific band Sprout perform selections from The Band's Last Waltz at this year's Review Music Awards Ceremony, a bolt of inspiration came to him.

"After catching that performance for the first time I came up with the concept of putting together an Allman Brothers Tribute band," he explains. "And I think what inspired me the most about this project was the fact that I knew guys that would be interested in doing this with me who had the chops to really make this project work."

Half of the musicians he was able to ask on the spot the moment the idea sprung, and after numerous rehearsals, Stand Back: A Tribute to the Music of The Allman Brothers is set to be presented to public at Pit & Balcony Community Theatre on Saturday, November 8th. Tickets will be $10.00 at the door, which opens at 8:00 PM. The show will start at 9:00 PM.

"For the guitar work, the only people I could think of that would truly make this sound authentic were Matt Besey and Drew Pentkowski," continues Chris. "Both are exceptional guitar players whose influences include the Allman Brothers. Matt and Drew have done a lot of jamming together over the years and it is apparent they speak each other's languages through their guitars."

"It's a perfect Duane/Dickey fit," he adds. "Drew's slide playing is remarkable and he really takes after Duane Allman quite a bit. Not only are they both guitar slingers, but also they each have unique voices capable of capturing the harshness of Gregg Allman's voice. With these two guys, I couldn't have it any other way."

For keyboard duties, Chris enlisted Loren Kranz, whom he notes is absolutely perfect to fill the Hammond organ slot. "Loren's style isn't flashy yet he's very tasty and selective as to what he plays. His singing voice is very smooth and mellow and he has a perfect sound to finesse through songs such as 'Melissa' and 'Blue Sky."

With Chris handling the low-end foundation like Allman bassist Berry Oakley once did, Chris notes that his biggest influence on bass (apart from his father) was Oakley. "I knew that I would have no problem in helping to propel the sound of this project."

For percussion duties, Chris states that selecting drummers was almost too easy. "Butch Trucks and Jaimoe are completely different drummers, yet they compliment each other wonderfully. Matt Burgie is definitely the Butch Trucks of the group. He lays down the groove with the most authority and a very heavy sound, while Mark Dault – the Jaimoe of the project – is absolutely perfect in the rhythm section. His heavy jazz influence compliments Burgie's sound with flourishes that really help create the Allman Brothers Sound. All of these guys are phenomenal on their instruments and everybody plays off of each other extraordinarily well. I can't believe how easy it was to pick everybody out and have everybody agree to do this."

With such a wealth of material involved with the Allman Brothers history, how did the group go about selecting songs and what periods of their career will be covered?

"With all of the songs to choose from and taking our lineup into consideration, I decided to go back to their earliest of years," reflects Chris.  "Particularly back to the Duane/Dickey era.  That's when as a band we all believe their best music came from. For us, musically, the talent is there. We can jam, we can groove and we have the voices capable of even the deepest of soul.  As for how I chose the songs, I looked at it from different points of view.  First, what the audience wants to hear, second, what we would have the most fun playing and third, a showcase for each element of the band - a happy medium for all aspects."

What has been the most challenging component of this project?

"The most challenging component of this project, by far, has been coordinating rehearsals and trying to get all six members together at the same spot at the same time," he laughs.  "Lets face it, everybody has a life and everybody has a million other things going on.  Families, day jobs and other gigs make it really tough to work around.  But believe it or not, everyone has been more than happy to make a little bit of room for this project to slide in.  This project is blessed with the best group of musicians anybody could ever ask for.  And the coolest thing of all is that we're all friends and we've all worked with each other before somewhere down the line."

I'm curious as to what Chris personally feels it is about the Allman Brothers that has caused them to endure as such a formidable musical legacy over the decades.

"I think that what has let the Allman Brothers Band endure is their contribution to melting improvisation into rock and blues.  Basically helping pioneer what we like to call "jam band".  My Dad told me a long time ago, that the best way to categorize them would be Progressive Rhythm and Blues.  Taking that, and combining it with an outstanding bluesy voice via Gregg Allman, Duane Allman's burning hot guitar/slide playing while given the twin-lead guitar sound thanks to Dickey Betts backed by one of the most powerful rhythm sections of all time of Barry, Butch and Jaimoe - its a sound easy for generations to fall in love with.  That's how you survive the test of time.  That's how you endure such a legacy."

How much work and rehearsal has been involved with putting this project together and des Chris feel it's something the collective will be able to roll out for future performances?

"Obviously, the rehearsing and the practice behind the rehearsals has been he toughest part of Stand Back.  For the most part, everybody involved is familiar, to an extent, with the Allman Brothers music.  For some songs, it was as easy as the first take, to nail the arrangement and make it stage ready.  Other songs have taken a substantial amount of work, particularly with the guitars, to make it flow and sound right."

"Its hard on everybody because there is a lot of work for every instrument behind all of these songs.  So everybody kind of takes some time out of their lives to sit and woodshed their parts on the tougher songs."

"Some guys have more work to do than the others.  Drew, Matt Burgie and myself kind of grew up listening to the Allman Brothers so we definitely had a head start on the material.  As for full fledged rehearsals, we started a comfortable amount ahead of time, and we have done a pretty good job trying to nail a full-band rehearsal every other week."

"Musically, we have more than what it takes to make this an event worth seeing.  This upcoming performance is going to show everybody, and ourselves, that there is a lot of potential behind this."

"There isn't that many Allman Brothers Tribute bands and I felt it was a good time to start one.  There are plenty of fans out there that would love to hear the Allman Brothers material."

"Is it just another tribute band?  That's all on your perception as an audience member.  And the audience will choose which road this band takes and if the "road goes on forever".

Pit & Balcony is located at 805 N. Hamilton St. in Saginaw. For more information call 989-754-6587 or go to myspace.com/theallmanbrothersproject.