Spirit Players Ready to ‘Prove Themselves’ All Over Again 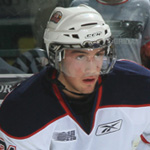 The Saginaw Spirit is entering its ninth season and the team has drawn more than 1 million fans, but within the hockey establishment, Saginaw often is still found pursuing respect.

For the past two seasons, the Spirit defied predictions and made strong pushes during the regular season and into the Ontario Hockey League playoffs.

Nonetheless, some sources predict that the Spirit will be on the outside looking in at the close of the 2010-11 season.

“I don’t think anybody in our dressing room cares about those predictions,” says Leigh Cunningham, the Spirit’s play-by-play announcer.

Cunningham says the Spirit’s loyal fans at TheDow Event Center should expect another hard-working team that grinds it out, possibly with more offensive firepower.

The season home opener is at 7:11 p.m. Thursday, Sept. 30, against the Sudbury Wolves. Ticket information and the season schedule are available at saginawspirit.com

“You have 20 teams in the OHL that are all optimistic at this time of year, of course, but with the Spirit it’s been building up over the past few years,” Cunningham says. “On paper I believe we are equal with anyone in the league. We have nice young talent and we can play a physical game. We have a good mixture of grit and skill.”

The Spirit, like all OHL teams, is losing some key players to the junior hockey age limit and to the pro ranks. They will miss Jordan Skellett, Tyler Murovich, Jordan Hill and goalie Eddie Pasquale.

But a key to success in junior hockey, Cunningham notes, is to patch the holes year by year with team depth and a good reputation, so that free agent players will come your way.

A case in point is the all-important goalie position. Pasquale is advancing within the system of the NHL’s Atlanta Thrashers, so it would seem that Saginaw would face a big hole. Not so. The Spirit have recruited Mavric Parks, who helped carry Barrie to the OHL playoff finals last season with the league’s lowest goals-against average and best saves percentage.

“We have had Mavric on our wish list for a long time, and now we have him for his final season in the league. Our hockey club will gain from his playoff experience last season,” Cunngingham says.

Ryan O’Connor and Peter Hermenegildo are defensive anchors in front of Parks.

O’Connor is known for his ability to move the puck and set up the offense, and he also gained great experience skating with Team Canada’s Under-18 team during the summer. Hermenegildo provides a booming slap shot from the point.

“As a group, it’s going to be a strong unit,” Cunningham says.

Saad is an imposing physical presence up front, while Trocheck specializes in he two-way game.