the Spirit scored 3 goals in 23 seconds in the first period and Jake Goldowski followed with 2 power play goals late in the third period.... 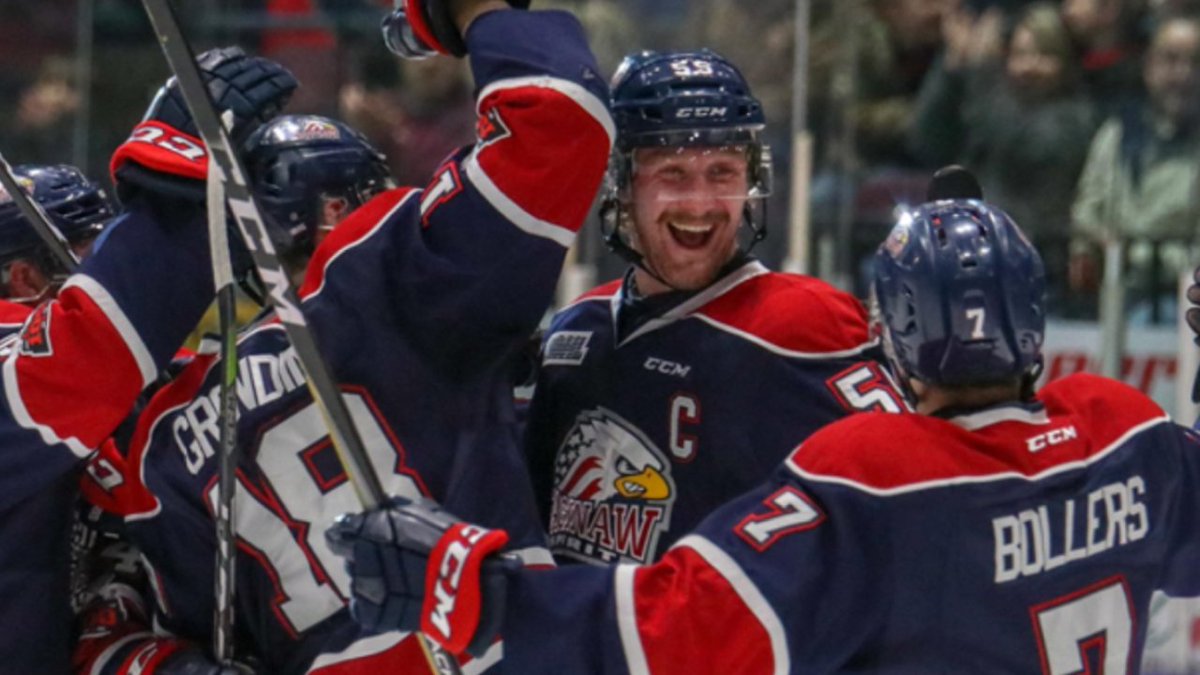 The Saginaw Spirit (24-18-4-0) scored three goals in just 23-seconds, jumping out to a 4-1 lead, but relented three goals in the second and third periods, before Saginaw forward Jake Goldowski scored back to back goals late in the final period, leading to a 6-5 win over the Windsor Spitfires (23-19-2-2) in front of 4,832 at the Dow Event Center tonight.
Tonight's victory, coupled with a Guelph Storm (50-points) loss, 2-1 to the Owen Sound Attack, gives the Spirit (52-points) sole possession of fifth place in the Ontario Hockey League's western conference standings.
After Windsor's Jake Smith (13) had tied the game at 4-goals apiece at 6:06 of the third period, Goldowski (5) took advantage of a Windsor 2-minute boarding penalty, scoring a power play goal with assists from Keaton Middleton and Blade Jenkins to take a 5-4 lead at 7:02 of the third period.
Just over a minute later, Goldowski (6) would score his second power play goal of the night following a Windsor roughing penalty, with assists coming from Mason Kohn and Jenkins to extend the Spirit lead to 6-4 at 8:06 of the final period, before Spits' forward Cedric Schiemenz (1) managed to cut into the Spirit lead (6-5) with a goal just 47-seconds later, at the 8:53 mark of the third period.
The Spitfires had come out flying in the first period, forcing Saginaw into defense-mode after three consecutive penalty kills (including a 5 on 3 man advantage) which the Spirit had also killed, before Windsor rookie Daniel D'Amico (7) beat Spirit goal tender Evan Cormier for his seventh goal of the season, while the teams were back at full strength, giving Windsor an early 1-0 lead at 10:50 of the first period.
Saginaw responded with 3-goals in 23-seconds when Cole Coskey (23) redirected a Marcus Crawford shot from the point to tie the game at 1-goal apiece at 11:51 of the first period, then Max Grondin (8) made it a 2-1 game with an unassisted goal, his eighth of the season, just 9-seconds later at the 12:00 minute mark, followed by Kohn (14) who buried his fourteenth of the season from Coskey and Crawford, giving the Spirit a 3-1 lead at 12:14 of the opening period.
Just over 2-minutes later, Spirit rookie Ryan Stepien (7) sniped one over the left shoulder of Windsor goal tender Michael DiPietro, hitting the back bar and down to give the Spirit a 4-1 lead, with assists coming from Danny Katic and Crawford at 14:31 of the opening period.
The Spirit scored its first four goals on just 6-shots on goal, heading into the first intermission with a comfortable 4-1 lead, while actually being out-shot by Windsor (8-7) after 20-minutes of play.
Midway through the second, Windsor forward Curtis Douglas (14) cut into the Spirit lead (4-2) with his fourteenth goal of the season at 7:36 of the second period, before Smith (12) intercepted a Spirit pass at the blue line, scoring the first of his 2-goals to make it a 4-3 game at 17:54 of the second period, prior to his game-tying third period goal.
Cormier stopped 19 of the 24 shots he would face in net for the Spirit, while DiPietro turned away 28 of the 34 shots he saw in between the pipes for Windsor tonight.
The Spirit will look to finish strong, ending a tough week with a visit from the CHL's top team, the Soo Greyhounds (39-5-2-1) for the second day of the 2018 Ice Blast weekend at the Dow Event Center at 5:30 pm tomorrow afternoon.