After finishing the regular season having won just 2 of the last 13 games, the Spirit will now look to the first round of the OHL playoffs where they will open against the Soo Greyhounds... 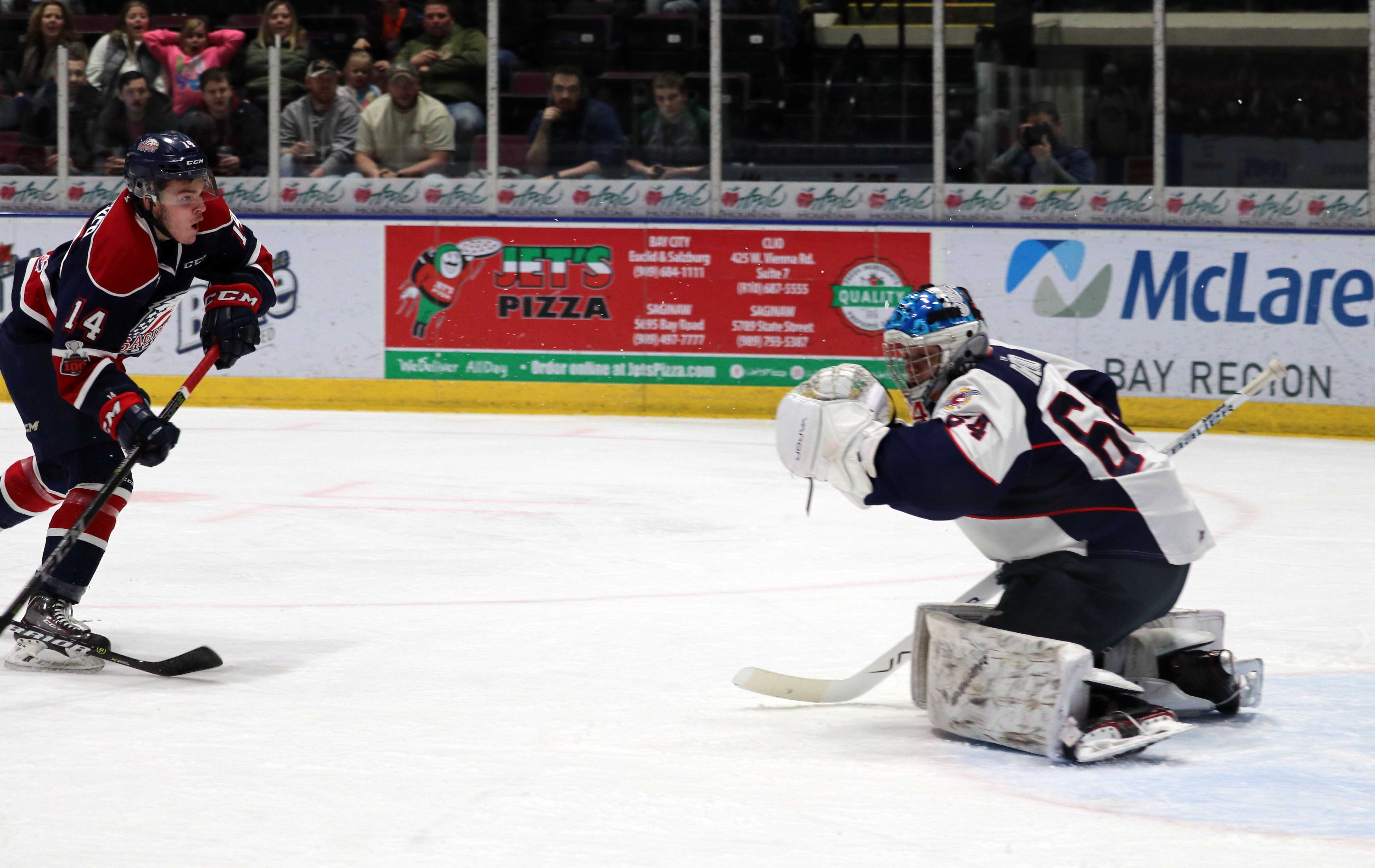 Windsor, ON:
The Saginaw Spirit (29-30-9-0) scored two goals in less than 16-seconds late in the second period to erase a 2-0 deficit and tie the game at 2-goals apiece, before eventually dropping the regular season finale after a 3-2 loss to the Windsor Spitfires (32-30-4-2) in the final minute of regulation on a very rare empty-net, game-winning goal in front of 5,542 at the WFCU Centre in Windsor, ON this afternoon.
The Spirit (No. 8 in the western conference) found itself in a rare situation, needing only a win in regulation (an OT win, or shootout win wouldn't help) today in order to jump to the No. 7 seed, where they'd open the playoffs with a slightly favorable opponent, the No. 2 seed Kitchener Rangers.
Anything other than a victory in regulation meant (finishing as the No. 8 seed) and opening the OHL playoffs against the Soo Greyhounds (the No. 1 team in the 60-team Canadian Hockey League) so,  Spirit head coach Troy Smith laid his cards on the table and pulled goal tender Evan Cormier for an extra attacker at the 17:19 mark of the third period.
Saginaw had many chances, peppering Windsor backup Brock Baier over the next few minutes, however, Windsor forward Jake Smith (20) scored his second goal of the night (the eventual game-winner) shooting into an empty Spirit net for a 3-2 lead at 19:27 of the third period.
Windsor had jumped out to an early lead when Smith (19) scored a power play goal (the first of his two goals tonight) for a 1-0 Spitfires' lead at 14:22 of the first period.
The Spit's would add to its lead when defenseman Nathan Staios (3) made it a 2-0 game with an assist coming from Smith at 6:17 of the second period.
The Spirit finally got on the board when D.J. Busdeker (10) scored his tenth goal of the season with assists from Duncan Penman and Nicholas Porco to make it a 2-1 game at 15:35 of the third period.
Just 16-seconds later, Spirit overage forward Mason Kohn (20) knotted the game at 2-goals apiece with his twentieth tally of the season on an assist from Blade Jenkins at 15:51 of the final period.
The Spirit will now look to shock the world against the Greyhounds in the opening round of the OHL's western conference playoffs, despite finishing the regular season having won just 2 of its last 13 games.
Cormier stopped 27 of the 29 shots he saw in net for the Spirit today, while Baier earned his first career OHL win, turning away 31 of the 33 Spirit shots he saw in between the pipes for Windsor.
Saginaw could get a boost if veteran forward Brady Gilmour (a seventh round pick of the Detroit Red Wings in the 2017 NHL draft) makes his expected return to the ice for the playoffs.
Gilmour hasn't played since going down with an elbow injury after (what some have called a cheap-shot) taking a hard hit against the Sudbury Wolves back on Jan. 19, at the Sudbury Community Arena two months ago.
Without Gilmour in the lineup, the Spirit have been a completely different team, having won just 6 of its final 25 regular season games.
Here is a look at the likely first round scenario:
Game 1, Friday March 23, 7:07 pm at the Soo
Game 2, Sunday March 25, 3 pm at the Soo
Game 3, Monday March 26, 7:05 pm in Saginaw
Game 4, Wednesday March 28, 7:05 pm in Saginaw
Game 5, Friday March 30, 7:07 pm at Soo **(if necessary)
Game 6, Saturday March 31, 7:05 pm in Saginaw **(if necessary)
Game 7, Monday April 2, 7:07 pm at Soo **(if necessary)