Posted In: News, Investigative Reporting, Local,   From Issue 797   By: 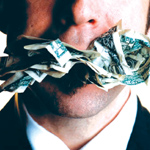 In theory, the state & community college system is one of the most egalitarian and progressive-minded institutions in America. Its goal is to make sure that kids who cannot afford to enroll in expensive private universities and colleges are nevertheless able to get a great education and improve their chances of climbing the economic ladder and making real the implicit American promise of social mobility.

And while the focus in recent years has been upon the student loan crisis, with Congress attempting to lower interest rates for students crippled by debt the minute they receive their diplomas, colleges are also shelling out record amounts to their presidents, whose median compensation at public research universities went up 4.7 percent last year to $441,392.

The top dollar for a sitting public school president went to Auburn University’s Jay Gogue, who made $2.5 million in total compensation, a figure that would be nearly 20 times the salary for the governor of Alabama—if the governor had not pledged to forgo his salary until unemployment in the state improves.

According to documents received by the Review through a Freedom of Information Act request back in April of this year, here is a breakdown of what Delta College President Jean Goodnow receives in terms of annual compensation:

Additional benefits that she receives, which are offered to all employees consists of:

A Freedom of Information Act request sent to Saginaw Valley State University in May of this year for President Donald Bachand shows that he is in a similar ballpark, receiving a total annual compensation package of $320,415.00 that did not include additional benefits for “reasonable university related entertainment including memberships in clubs, organizations or service groups approved by the Board, with 180 hours of annual vacation leave accrual.”

Back in 2009, then Delta Board Trustee Kim Higgs distinguished himself as the only college trustee to question expenditures for these salary packages, asserting that the ever-increasing costs of higher education have been mischaracterized and shifted to issues other than the real problems in our higher educational system. At that time he succinctly noted: “The problem is not the quality of educational programs that are being provided but rather the cost of the same.”

Five years later The Review decided to re-visit this topic and there is no doubt that the cost of higher education keeps increasing at a rate faster than the rate of inflation and faster than the ability of people to keep up with these rising costs.

According to the biennial report from the National Center for Public Policy and Higher Education, published college tuition and fees increased 439 percent from 1982 to 2007 while median family income rose 147 percent.  Student borrowing has more than doubled in the last decade, and students from lower income families, on average, get smaller grants from the colleges they attend than students from more affluent families.

Let us consider the situation in Michigan in particular, where as of August 2014, the unemployment rate of 7.4% ranks our state as the sixth highest state in the country, tied with California & Tennessee, with only Nevada, Rhode Island, Mississippi and Georgia leading.

For presidential pay to be escalating at a time when institutions such as Delta are cutting budgets, laying off faculty and staff, and raising tuitions undercuts the credibility of the institutions and damages the relationship between them and the public they are meant to serve

Against this backdrop and since the Review filed these FOIA requests last Spring, shortly after announcing additional faculty & staff layoffs, recently the Delta Board of Trustees actually increased and approved a 3.7% raise for Goodnow – a little over three times the average increase for all employees this coming year.

Consequently, while the Michigan Supreme Court voluntarily gave up their state supplied vehicles back in 2009, in that same year Delta raised its car allowance for the President to $9,000 per year.  Additionally, while most Great Lakes Bay area employees have had their benefits significantly reduced, Delta College increased the President’s health insurance & disability benefits along with their contribution to her annuity plan.

Presidential compensation at Delta & SVSU is higher than that of all other officials in Michigan’s state government, including the governor.  While the average salary of all state governors in the United States in 2013 is $133,348, the base salary of the Delta College & SVSU Presidents is $184,805 and $250,000 respectively.

Moreover, when it comes to notions of ‘public service’, governors in 3 states – Alabama, Florida & Tennessee – do not accept a paycheck or return their salaries to the state. Indeed, Michigan Gov. Rick Snyder returns all but $1 of his salary to the state and several governors have taken voluntary salary reductions in recent years.

But here in the Great Lakes Bay area, the base salaries of the Delta & SVSU Presidents is also higher than the base salary of U.S. Senators, Congressman, Justices of the United States Supreme Court, and all members of President Obama’s cabinet. While these their roles are extremely important, the questions remains whether the value of their service to the community is greater than that of those public officials named above?

According to Debra Lutz, FOIA Coordinator & Vice President of Business & Finance at Delta, their salary adjustments are typically in line with the rest of their employees in terms of annual increases. “The President’s salary is compared favorably from a conservative standpoint to other similar like size institutions,” she responds. “Regardless of how it compares to other government officials, it compares very favorable to other college university presidents. Quite honestly, it is on the low end.”

“I’m not here to defend these actions,” she continues, “but I’m saying that the Board looks at this similar to what the CEO would receive from a $1 million corporation. It depends upon the industry and what the market will bare. There has been a lot of difficulty finding presidents for colleges, as a lot of presidents are retiring and leaving the workforce and we are finding it difficult to find replacements in terms of people willing to do these jobs no matter what they pay.”

But isn’t the Board, in essence, operating in a vacuum that is disproportionate with the realities of other public and government entities?  “At Delta we are totally aware of and operate within the economic environment of this region and state,” she asserts. “That’s what drives us. We are here to serve the local economy and have to look at what the market will bare. We work very hard to keep our tuition affordable and it is actually below the state average. We are considered one of the top community colleges in the state and work hard to keep tuition low. I can’t comment on what other colleges or government entities do because we are not in that arena, but I can tell you we are very much aware of the pressures of our economy and the factors that drive it. We don’t operate like a big prestigious university. That is not our model.”

According to Lutz, Goodnow’s contract is for a 3-year term, but the financial aspect is reviewed annually. “The financial aspects of it do not change and it would remain the same unless the board took public action to change it. Every year they do this in a public board meeting.”

Be this as it may, perhaps governing boards too often believe their institutions are like a business, in which the CEO, supported by a few carefully selected directors, can call the shots. But that is not generally the case in the academic world, where the stakeholders are the citizens and taxpayers that help fund the university or college.  In our opinion, escalating presidential compensation is divisive and ultimately works against the notion of shared governance, which is central to most of our institutions.

Sadly, this is not limited to top positions. As colleges and universities have had more money to spend, they have not chosen to spend it on expanding their instructional resources—that is, on paying faculty. They have chosen, instead, to enhance their administrative and staff resources. A comprehensive study published by the Delta Cost Project in 2010 reported that between 1998 and 2008, America’s private colleges increased spending on instruction by 22 percent while increasing spending on administration and staff support by 36 percent.

Parents who wonder why college tuition is so high and why it increases so much each year may be less than pleased to learn that their sons and daughters will have an opportunity to interact with more administrators and staffers— but not more professors.

Well, you can’t have everything.

Forty years ago, America’s colleges employed more professors than administrators, with the efforts of 446,830 professors supported by 268,952 administrators and staffers. Over the past four decades, though, the number of full-time professors or “full-time equivalents”—that is, slots filled by two or more part-time faculty members whose combined hours equal those of a full-timer—increased slightly more than 50 percent. That percentage is comparable to the growth in student enrollments during the same time period. But the number of administrators and administrative staffers employed by those schools increased by an astonishing 85 percent and 240 percent respectively.

In conclusion, colleges and universities have been operating in a vacuum without any regard to what is happening in the general economy. College boards have been have been treating college presidents more like corporate CEO than public servants.  And based upon the current economic realities of our day and the continued higher cost of education, attempting to preserve the status quo is not a viable option.