The Release of an Oath 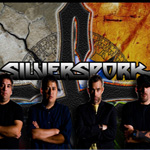 Listening to this new Silverspork CD is like opening a door to a blast furnace and basking in the heavy metal blaze as it seers your brain and melts your face. This band has the raw power of Iggy & the Stooges, the intensity of Eminem, the healing and prophecy of Bob Marley and the lucid political analysis of Noam Chomsky. This is post apocalypse gospel music that leads through the heart of darkness and into the light.

Silverspork is like an eternal Knight of the senses creating words, images and music that pulsate to the rhythm of the streets. Brian Gretzinger is the singer and lyricist and his songs are pocket essays on the crisis of materialism and the emptiness of modern life. Carl Abila is a gifted guitarist who can sustain a stroke of pure thunder and explore up and down the neck like he’s making wild passionate love to a rock & roll goddess. The drummer/percussionist Mario Salcedo is power personified with lightening quick wrists that sets the frantic pace without skipping a beat. Jay Burk fills out the lineup on bass. He’s a monster and his contribution cannot be overstated - a heavy band like Silverspork requires a bottom that comes on strong and Burk’s is one of the best.  He and Salcedo are integral to the overall sound. This disc is an act of courage in its honest depiction of our current hypermasculine, business-led culture.

The Matrix to the Occipital Lobe opens with a metal riff that attacks the body like a slug to the chest. The lyrical themes reveal a fictional universe that appears more real than our own sad reality. Spiritual metaphors are prominent – a portal to the other side, a tunnel that holds the light. In this alternate universe psychedelics are a sacrament and reality is multidimensional. This is a trip you need to take with a seasoned astral traveler. The Spork hits it hard with a sound that is an unrelenting G- force attack that fills the senses to overload until your salivating and begging for more like Fonda taking on # 19 while salivating for # 20 during her final blaze of glory in the Mekong Delta.

Mastodon is a clear-eyed nightmarish vision about the end of an empire. The rot has set in and the social control agents are spoon-feeding us propaganda through television, pharmaceuticals, marketing, and religion. It is really the ancient allegory of David & Goliath. Our government, led by the educated and elite – the stooges of Wall Street, is crushing us like a mastodon. It controls our thoughts and kills our soul. Gretzinger sings his ass off, sounding like Michael Stipe on the verses and an enraged Roky Erickson on the chorus.

Resilience is the angriest and most political cut on the CD. It hits the mark, an unwavering bull’s-eye on political corruption. Abila’s spoken word verses provide the context to Gretzinger’s impassioned singing on the bridge and chorus:

Abila: The perpetuation of fear as a means of control is governed by the subjugation of the masses through illusory lies, war, disease, famine, Godlessness, Immorality, prescription drugs, and murder at all levels.

Gretzinger: Resilience and Integrity; It’s all part of the anarchy. Sieg Heil; Sieg Heil!
Powerful – a masterful expose of the fall and decline of the American Empire.

Apparatus rocks like there is no tomorrow. It is a relentless sonic assault with interesting if not obscure lyricism. Gretzinger seems to be writing about love and sex – the somewhat typical and mundane psychosexual dramas that occur on mainstreet. Boy meets girl. Their reptilian brains are activated and the game is on.  A deeper meaning is hidden beneath the sensual glow of the lyrics that evokes a more personal vulnerability around the trappings of the music industry, the whims of the critics and tastemakers, and the elusive lucky break. Music is the apparatus. Success is the aphrodisiac.

X-Set opens with just a hint of a metalized My Sharona riff (borrowed several times over from Richard Berry’s 1955 classic Louie Louie) and Gretzinger’s soulful singing. The lyricism is sheer poetry. Thematically precise and lyrically impassioned, the song rolls and thunders with the uncertainty of sudden changes and personal growth through acceptance of pain and sorrow. Splendor is elusive and it’s difficult to be impressive when you’re filled up with doubt. This is a prayer for love and salvation and a tale of human suffering.

Rake opens with a quiet electric/acoustic guitar riff and cymbal play that lulls the listener into a false sense of security. Gretzinger’s muscular tenor reveals an impressive range and control. He can sustain his pitch and then leap to another octave. The music shifts suddenly to a heavy metal industrial blast with savage drums and full-bodied machine gun guitar riffs that recall the best instincts of Randy Rhodes riding Ozzy’s Crazy Train.  Bassist Burk is no slouch; in fact he’s rock solid and able to anchor the rhythm section despite the huge wall of sound. The song covers a lot of ground asking questions that have no definitive answers - from alien sightings to the Big Bang and a belief in God. A powerful wall-of-sound unison chorus bolsters Gretzinger’s vision and message. It’s a dialectical dilemma:

Stand up, sit down
Put your feet back on the ground
Stand Back. Shut Up,
Well, don’t you make a sound…NO

Benzene is a warning about the prospects of never ending war and a nuclear winter. Gretzinger decries this holocaust created by states and governments that have no legitimacy to subjugate its citizens. It is a frightening vision…Abila counts it down

A prescription for extinction.

Explosive Bonham-like Zeppelin drumming and a insistent pulsating bass line create the soundscape for Fratricide, a searing tale of betrayal and the broken bonds of brotherhood.  The cutoff is complete and the brothers hurt each other in absence of any reasonable strategy to reconnect. Acceptance is the only way out of hell and letting go is the only path to healing. Another great Silverspork song.

InJusta sounds like U2 before the cowboy hats and shades. This is an incredible piece of music with several tempo changes (a Silverspork trademark), explosive drumming, masterful guitar work (hail Abila), tight edits, and the world-class vocal gymnastics of Brian Gretzinger. The lyrics speak to the false messages created by the mass media and our consumer culture. Marketing is now the central vehicle to create interest around a brand or product from automobiles, and oatmeal to political candidates. Marketers hire actors to tell lies about a product, as in the Vote For Change campaign that helped catapult Barack Obama to office. A second important message is that we humans have value simply by “being”. It informs the very nature of our existence, that no one is disposable.

Silverspork is right. We are the proof. God loves theatre.

Gretzinger sturdy tenor trembles in The Lease as he struggles with a spiritual longing and his struggle between hope and despair. It is his vision quest. The divine is calling out and it can be experienced even when his faith is tested by a profound loneliness and a felt sense of “I don’t know who I am.” A revelation, a smile inward and love, imbedded in his heart unfolds and fills the singer with serenity and healing.  A prophecy is restored and a spirit is leased in this temporary vessel.

The album was recorded at Random Awesome Recording Studio in Bay City. In the next month Silverspork will be playing weekend gigs in Ohio, Indiana and Illinois before returning to Mid-Michigan to perform shows @ The Hamilton Street Pub and other great venues

You can purchase the new Silverspork CD online @ ITunes, Rhapsody, Napster, and Amazon.