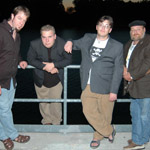 Any artist capable of moving an audience or listener is usually informed by the past & present musical heritage that surrounds him as equally as he is impassioned about the texture of his vision and desire to render his own singular contributions into the creative lexicon.

Scott Baker is a man of many disciplines. A fixture on the mid-Michigan music scene for many years now, first as a journalist for The Bay City Times and in recent years as a regular contributor to The Review, Scott shares an equal passion for aural expression as he does the written word, having fashioned both a solo and group musical career with outfits such as Muddy Gumbo and most recently, Scott Baker & The Universal Expressions, which earned 11 nominations and several top awards at this past year's 21st Music Awards Ceremony.

With the new release of a dozen original compositions on the stunning and beautifully crafted CD, Between Seasons, Scott has found a collaborative environment affording him the depth to properly showcase his spacious music.

Together for nearly two years now, according to Baker, Universal Expressions "Came about as a result of me shuffling my first solo group, The Roux, and landing on two feel with Timmy Scott on drums, who has been with me since the Muddy Gumbo days. We've played over five years together."

Eventually, John Grundner joined the group as keyboardist/guitarist & vocalist after a long-running stint with Billy & the Beertones.
"While we were in search of a bassist and coming out of The Roux, we were known as The Scott Baker Band for a bit," notes Scott. "Then John ran into Pete Socha and suggested him to me. Pete is new to the scene, but plays like he's been around forever. The rest is history, so far."

What are some of the goals & objectives Scott was seeking in terms of sound & approach on this latest outing?

"Mainly my eyes and ears were set on a focus for quality songs and songwriting with acoustic as well as electric overtones," he explains.
"I've been in the jam realm around here since Muddy Gumbo, where we took our cue with a Traffic/Santana/Allman Brothers/Gov't Mule sound. But having done a bunch of solo acoustic work wince we put Gumbo on hold in early 2005, I've been enjoying just doing great songs, as well as great, known, yet forgotten covers. I like writing something I can play acoustic that comes across well, all the while turning it up a notch electric with or without a jam involved."

"With the new CD I also got a chance to clean house with songs reaching as far back as Gumbo, up to my most recent, the title track Between Seasons."

Recording for Scott & Universal Expressions started in mid-January of 2007 with producer Tim O'Brien at the helm and wrapped sessions, mixing and mastering this past September.

"Tim has Diversified Media, essentially a house studio in Mt. Pleasant," explains Scott. "I met Tim years ago through the Northwoods Improvisers, which are an avant-garde acoustic jazz act known in their tight scene pretty much world wide. They're also based out of Mt. Pleasant." "Tim has recorded & produced a few albums for them and I really enjoyed the sense of space in his work."

"Tim set us up in his studio house living room to cut basic tracks in January, with vocals, solos, keys, acoustic, and flourish instruments all coming later throughout the year."

"I also was lucky in the time period to cut Starve My Eyes with the Northwoods Improvisers' Mike Johnston (upright bass) and Mike Gilmore (vibraphones) at Johnston's Northwoods Studio in West Mt. Pleasant as well."

"Tim engineered the whole CD outside of that one session, but he and I mixed the entire disc together. We spent nearly one day, every weekend from January to September, maybe taking a total of five or six of them off. But we put all we could into those afternoons and nights," reflects Scott.

Were there particular standout highlights from those sessions that stick in Scott's memory?

"Both of our highlights in recording came in May when Adam Levy flew into MBS to cut tracks for me. He is Norah Jones' longtime guitarist and a good friend of mine. Adam set up shop the day before Norah played Ann Arbor and we ran through two cuts of Chance Meeting, an old Gumbo song that I always wanted a definitive version of - one acoustic and one electric."
"The electric full-band version is on Between Seasons with Adam soloing. You can hear the other outtake of our live, two-piece studio rendition on my acoustic Myspace page."

"Adam and I also played live that night in Bay City at the Arlington in a double solo billing and he spent the night. My wife Julie and I ran him down first thing the next day to Ann Arbor to catch the Norah gig and put him back on the bus safe and sound. He went way out of his way and Tim, the band, and myself are without words at how grateful we are for him spending his rare spare time for us. I think Chance Meeting is one of my best songs and he has stamped that approval for me."

Having clocked a full length album and EP with Muddy Gumbo and a live two-piece EP, with this first & latest solo CD, Scott has over 20 published compositions under his belt, with hundreds of more sketches filling his music room.

Though Scott's usually done all his own writing in the past, for this latest outing he adopted a more collaborative approach, with the song Mellow Haze co-written by Eric Janetsky and Scott.  Similarly, Your Turn was written in collaboration with Neal Erickson when the two hit it off meeting through the Mid-Michigan Songwriters Guild. And Slap Back is a song that Scott tackled with Earl 'The Squirrel' Tiffin back from the Gumbo days.

"I originally wrote that for him and he tweaked the lyrics to fit his style," notes Scott. "Timmy told me to pull that tune back out earlier this year and I liked how Earl had it laid out, so I put that on the album too. That song was played on Z93 just a few Friday's back during their hometown feature that night. I like both collaborations and solo writing, as each gives really unique results if the song that comes out is worthy."

What does Scott feels distinguishes the sound of Universal Expressions and how does he view the group in terms of growth and evolution of its sound?

"Right now I hear a lot of people giving us the opinion that we are offering something that hasn't been readily available in the area as of late, especially in terms of our cover song choices. We fit the Tom Petty, Black Crowes, The Band, Ryan Adams singer/songwriter rock/jam mold and it has an updated '70s hue to it. My originals seem to blend in well. The band is really cohesive that way.  I've had people think we played a Grateful Dead tune or a Lenny Kravitz song and think it was really mine. That cracks us up!"

"In terms of growth and evolution, I see us heading to be more of a familiar old friend that offers something new," reflects Scott.

"Locally, we draw college kids, bikers, and a lot of people who thank us for being easy on the ears. One radio station party we played in Mt. Pleasant we were given kudos for being the only band they have seen with people dancing to the originals as well as the covers."

"We also recently got to play a quiet, jazzier gig where we had to groove people at a mellow volume for the Art Dart in Saginaw. I found we have a lounge side to us, as we pulled it off without a hitch, original and covers! That was a lot of fun for us. We didn't know clean and jazzy would work, but those well-rounded influences come shining through sometimes."

People can obtain the new CD Between Seasons at shows and also order online at www.myspace.com/scottbakermusic. They also have the album available for MP3 download on MySpace through Digstation.

"We totally want to play the region with this disc. We have gotten out of the area a few times already, but we are setting new horizons. Having this CD is allowing us to go more places. It all comes down to finding the right venue that can give us a shot and enough money to cover gas and some strings. We have made friends outside of here and we will be utilizing them for gig ideas and promotion."
With so much going for them right now, ironically, the most challenging component Scott view's as facing the band is finding appreciative venues to perform that care enough about real music.

"Most bars want covers down your throat, while places like Bemo's and White's thrive on featuring something more real -original music and different styles. Not the every day fare. It is really difficult to get someone to go out, travel a bit and hear music nowadays when gas is outrageous, quality venues are drying up, and you have the limited choices of the typical 'Brown Eyed Girl's Mustang Sally' or karaoke eating your money up."

"The Internet brings us to people, but not everyone is plugged in or surfing. You can't find live choices like you could years ago. Times have changed. Now we have to figure out how to get into the homes of the people that would like us and let them know we are out here. Nothing beats the new fan that has been looking for a sound like us and wants our web info and a copy of the CD."

"It has come to my attention over the past year or so that word of mouth is still one of the best search engines available," laughs Scott.
" If you like something, you must tell others. I can only hope that in our great search to be heard and to find our audience, we will come across some direct path with those who desire this music in their ears," concludes Scott.

"Kids enjoy it, older adults who like the rock, college age kids, and fellow musicians, we see such a mixed fan base. We have to share the music with each other and I hope we can all spread the love of music. Read about it, talk about it, and above all else, please venture to see the shows."