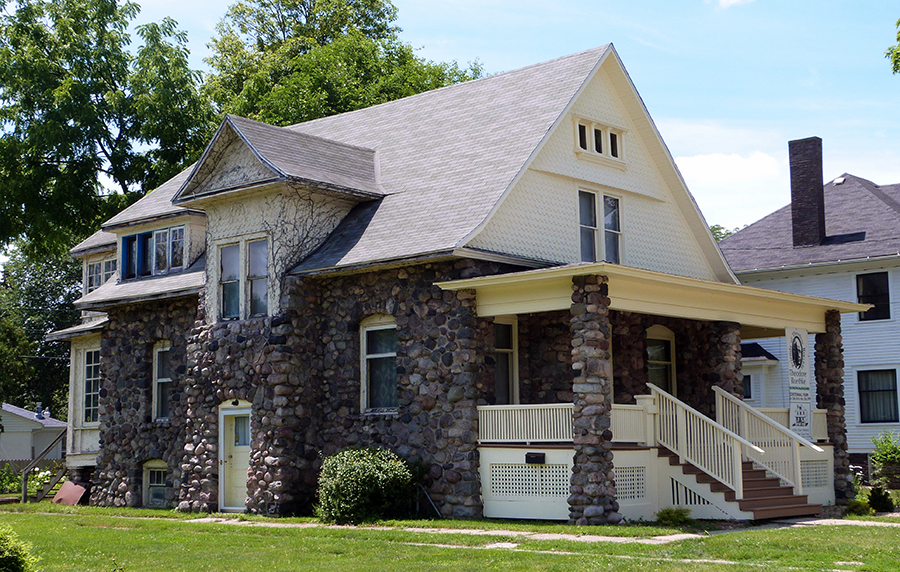 UPDATE:  At last night's meeting the Friends of Theodore Roethke Board voted to withdraw the action action of their October vote to remove and reclaim the historic stone house at 1759 Gratiot for an outside cultural space.  Plans are in the works to contact a professional fundraiser in Chicago - Jessica Strattard Hamilton - who grew up in Saginaw and has offered her services pro bono to launch  strategic plans to stabilize the stone house. Now the work begins.  Watch the REVIEW for future fundraising events and updates as they happen.

Since The Review broke the story three weeks ago about the plan of The Friends of Theodore Roethke (FOTR) Board to demolish the stone home at 1759 Gratiot,  one of the two historic homes associated with the work of the late Pulitzer Prize winning poet that are both listed on the National Historic Register, public outpouring to save this irreplaceable architectural icon has been immense.

On the first week of publishing the story in both our print & online editions, we received over 3,800 views and 790 engagements on Facebook alone, garnering substantial feedback and support for saving this historic structure from local, state, and national levels - ranging from university professors to fundraising professionals, and most importantly - architectural and structural professionals that took a tour of the home on February 15th and attest to the fact it would be more economically prudent to mothball the structure and restore it than to pursue the road of demolition.

The Friends of Theodore Roethke Board will have an opportunity to revisit their decision at a meeting that is coming up this Tuesday, February 26th at Braun Kendrick Law Offices, 4301 Fashion Sq. Blvd. in Saginaw at 5:45 PM., with the first 30 minutes slated for public comment and discussion.

The day our piece on the demolition was published we received a letter from Patrick Murphy, a former Saginaw resident now living in Washington, D.C., who worked on the Woodrow Wilson Presidential Library that had similar issues to the Roethke House, who offered his assistance and insight in saving the structure.

Assessments that the house is salvageable and not structurally unsound also came from Les Tincknell, Chip Hendrick, Tom Trombley, and Alex de Parry, who examined the foundation and current state of the historic home; and letters of support for saving the home also came from late Saginaw mayor Greg Branch and former circuit court judge William Crane.

According to Hendrick, despite the fact that the interior heat has been shut off for over 15 years, the  exterior stone is really in very good condition.  He writes: “In the immediate future I would consider a shingle roof replacement and soffit repair as needed which is about 25% of it.  Two windows were not closeable, but I would secure the openings with plywood at this time until heat is turned on rather than try and repair them now and possible do further damage to them. That along with putting a screen over the chimney flue would keep animals out of the home. Roof, soffits, and windows should be the first step in restoring the home that will keep it secure from the elements and from animals.”

“The home foundation is solid and while some parging would be needed in the basement, cracking was not evident in the basement walls. Mold was evident but only in two areas and likely contained in those small areas. Interior and exterior painting and floor treatments, new furnace, likely electrical wiring and the home would be in great shape. 1759 Gratiot is definitely worth the effort.”

The board did not set a timeline for action related to 1759 Gratiot.

According to Vice-President Michael Koleth, “If there are volunteers willing to pay for the stabilization of the dwelling, a new roof and insurance on an ongoing basis to delay or postpone any action, we are certainly willing to listen.  If an independent group arises to fundraise for renovations of 1759 that’s perfectly fine and commendable.  We may choose to delay the demolition.  We set no date.”

Another former Saginaw resident, Jessica Strattard Hamilton, who lives in works in Chicago as a professional fundraiser for non-profits such as FOTR has also donated her services in putting together a fundraising plan pro-bono. She will address the Board at the meeting through a conference call during the public comment portion of the meeting that will take up the first ten minutes of the 30-minute public comment period.

The Review has also learned that if the house is demolished the Michigan Historic Marker will be recalled because both Roethke houses (one on each side) are so designated.  Others warn that the two houses listed as one unit under National Register, open new problems if demolition of either property occurs.

They maintain this would bar the Roethke Museum permanently for being eligible for Federal grant funds including program support, endowment support, or capital campaign support.  Quite likely it could lead to being shunned from being a grantee by most regional and state foundations.

For example,  tearing down National Register property would make the Roethke museum ineligible for receiving state grant funds from MCACA (Michigan Council for Arts and Cultural Affairs), one of our major sources for funding summer activities through Saginaw Enrichment Commission.  And it could be the end for the Roethke museum itself, as it would advertise that Roethke board is not a trusted trustee of historic assets.

While the public is invited to attend and comment, space is limited and the general public is encouraged to send their comments to Roethkemuseum@yahoo.com