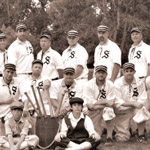 The first year of its career the Saginaw 'Old Gold's finished second among 16 teams in the 6th Annual World Tournament of Historic Baseball at Greenfield Village.  They beat the 3-time World Champion Clodbusters 17 to 14.  They rallied in the 8th to defeat Bay City 8-7 and then pounded the Columbus Capitals 23-3 to get to the championship final.

Saginaw lost to the Lah-De-Dahs of Detroit 11-7 when they hit two line drive outs with the bases loaded.  Saginaw outscored the best four teams in the Vintage Baseball World 55-35.

Game one was pitched by Saginaw's 'Gramps' DeFord (age 79) and 'The Cajun Kid' Cox.  In the 17-14 win over the 'Clodbusters', 'Brute' Hammond led the way with 5-hits, while' The Vanilla Gorilla' Konuszewski and 'The Riverman' Dost blasted four each.

The highlight moment came when 'Slink' Spitz rifled a shot into the centerfield trees, their long fielder ran back full tilt, tripped, and disappeared into the woods.   His teammates carried him out (it was reminiscent of 'Bump' Bailey in the 'Natural' running through the centerfield wall and killing himself).

This is the same 'Clodbuster' team that beat Indianapolis 14-3 in McBride Stadium (Richmond, Ind.) in front of 2,500 fans on July 24th of this year.

On to game two: Saginaw went into extra innings with the Bay City Independents.  In the last of the eight, down 7-6 the 'Old Golds' had two out and no one on before  'Squints' McCauley doubled and 'Lumberman' Piersall singled.

Up stepped the former Michigan High School Player of the Year, U of M two-year starter, 6-year pro, and Pittsburgh Pirate - Dennis 'Ski' Konuszewski who survived a foul tip when the Bay City catcher dropped the ball.  His next swing was a rip down the left field line.

John Piersall would not be denied the winning run, as he roared home with the victory and Saginaw's 3rd win over the Independents this season (which includes the 7-2 pounding at the Dow Diamond).

'Black Jack' Tany mixed his pitches well for Saginaw and kept the Bay City boys off stride.  'Black Jack' flew through the air attempting to catch an infield pop up. After picking himself up, he went on to pitch up to the last inning.  It was a great effort and he earned his teammates admiration.

Chuck 'Ducky' Mahan came in and shut down the 'Independents' for the save.

Game three saw Saginaw facing the young, muscle-bound Columbus Capitals.  Their slap leadoff hitter pounded the ball purposely to the ground, into the bushes, and onto the parking lot for a triple in his 1st at bat.  Coach 'Professor' Curry was ready the next time he came to bat.  He put 'Brute' into foul territory and placed 'Scoops' Larkin at third, it screwed with the Capital's leadoff man's head and he was ineffective the rest of the game.  The 'Old Golds' ripped Columbus 23-3 without even taking their bats in the last inning.

'The 'Vanilla Gorilla' pitched the entire game for Saginaw.  Piersall led the way with 4-hits, followed by 3 each from Hammond, McCauley, 'Hollywood' Holly, 'Baby Bull' Diag, Dost, and 'Slink' Spitz.

In the next game in the loser bracket, Bay City's 1st baseman took out a little frustration as he hit a line shot directly into the Indianapolis's 1st baseman's crotch.

On to the Championship game: for the World Title, Saginaw against last year's champion, Greenfield's own Lah-De-Dahs.  The hillside was covered with over 1,000 fans, and the band played throughout the game in the warmth of sunshine.  The local team kept Saginaw to 7 runs as their pitcher fired the ball over the plate with a variety of pitches and the Lah-De-Dah fielding was flawless.

The games' special moment came when 'Slink' Spitz rambled down to 1st and was called out by the ump.  The 6' 8" Lah-De-Dah 1st baseman told the Ump he was pulled off the bag and claimed 'Slink' safe (Now that is a gentleman).

'Hollywood' was 4 for 4 with 3 RBI's, 'Squints' McCauley was 3 for 4 with 2 RBI's, and both the 'Gorilla' and 'Lumberjack' recorded doubles.  Konuszewski pitched the entire game and if it wasn't for a few unexpected errors he would have won that game as well.

Harold said he is having knee surgery and he will then challenge 'the Professor', 'Sawdust' and the 'Cajun Kid' to a foot race-bring out the sundial.

To think in the 'Old Golds' 1st year of existence they're looking for the World Title with the bases loaded and the top of the lineup ready to roll when the top hitters both lined out to end a dream is - in one simple word - amazing.

As Coach Curry explained, it, "Our team played with courage and conviction and took the close loss with character and dignity."

Richard Curry gave game balls to Harold Campau, Tom Mudd, and Dennis Konuszewki.  In competition among the Vintage players Chris 'Hollywood' Holly won the fastest around the bases at a little over 15 seconds-not bad for the big guy (World Record is 13.3 seconds).

Tobi 'Scoops' Larkin was 3rd in the furthest thrown ball.  John Piersall, the 39-year-old wonder just missed with the most perfect throw.

The Saginaw 'Old Golds' will no longer be able to sneak up on people, as the players at Greenfield Village now know they have a team to be reckoned with.

'Squints' McCauley E-Mailed Harold and Richard;  "You've done a great job with the club this year.

You've put a great team together and you've made us competitive each game.  This weekend was good sign of things to come.  I was stopped by a lot of different club players and they had nothing but great things to say about your 'Old Golds'.  That is a direct reflection on your efforts."
Lumberjack' Piersall commented, "The players this weekend became a team."