Set to Deliver His Fiery, Colorful, Innovative Approach to the Blues at the Kingfish 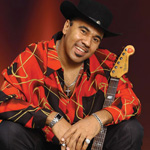 As anybody with a passion (or even a fondness) for the Blues can attest, it is decidedly one of the more difficult musical genres to conquer, and consequently increasingly rare to find artists coming forth with fresh and original statements.

Ronnie Baker Brooks is an artist governed yet fortunately an exception to that rule. As the son of blues legend Lonnie Brooks, he grew up saturated in the traditions of the idiom, yet his focus is keyed solidly on the future as the tracks on his third original CD, The Torch, readily prove. Not only does Brooks sing with a soulful fire and pull notes from his guitar strings with a white-hot intensity, but he's also picking up 'the torch' from previous generations of soul & blues greats and moving the music forward into the future.

Tri-city audiences will have a rare opportunity to catch this up-and-coming Blues Powerhouse at a one-night performance on Friday, March 14th at The Kingfish Restaurant in Bay City with special guests The Rusty Wright Band. Showtime is at 9 PM and tickets are only $20.00 and available at The Kingfish, 1019 N. Water St. in Bay City or by phoning 989-894-0772.

"I grew up among the best of the best," Brooks says. "Every time I play, I feel like I've got to do it with the authenticity and passion that I saw in guys like Buddy Guy, Muddy Waters, B.B. King and my father.  But I also have to put my twist on it. None of those guys repeated what came before them."

The 'spin' that Brooks brings to the music involves igniting blues-rock with deep soul and modern hip-hop vocals coupled with funky rhythms.

And working with Minneapolis producer Jellybean Johnson, a veteran collaborator of Prince and Janet Jackson has allowed Brooks to take roots sounds and transform them into something that spans the ages.

"I like to think of how Muddy Waters took the Mississippi blues he heard in his youth and modernized it for his times by making it electric and harder," Brooks explains. "That's what I'm trying to do for my generation. I want to take what's authentic and powerful about the music I grew up loving and bring in other influences without losing the heart and conviction of it."

Most telling is how Brooks draws on the choppy, hip-shaking rhythms of funk, the emotional truth of soul and the forcefulness of rock to bring a distinctive dimension to his groundbreaking sound.

"I wanted to do something that would bring young people to the blues, and then give them the real hardcore thing at the same time," Brooks says. "When I grew up, all my friends listened to rap and funk, and I listened to the blues. So I heard their music and they heard mine. I think we both saw some connection between them."

Brooks is making his bold foray to transform the sound of the Blues at a time when he perceives a new vitality being brought to the music through himself and other contemporary artists like Shemaekia Copeland and Bernard Allison. "I'm convinced this music is as relevant and powerful as the latest hits by Kanye West or Beyonce Knowles, but it doesn't receive the same exposure to young listeners," he notes.

"You can see it in the success blues-influenced players like John Mayer and Jonny Lang have enjoyed," Brooks says. "All they needed was to have their music heard, and people loved it. That's all it takes."

Like his father before him, Brooks became a Chicago blues mainstay, playing regularly in Chicago area clubs.  After the release of his second album, 2001's Take Me Witcha, he hit the road for what turned out to be a seemingly non-stop three-year tour, picking up devoted new fans all along the way.

Brooks wisely took a 5-year break to concentrate on recording The Torch, noting that he had time to test almost all of the songs on an audience and work them out with the band. "This gave us a lot of confidence in the studio, knowing that people already loved these songs."

When asked what the key elements are that inspire his own creative vision, Brooks explains that derive mainly "from the many influences I had growing up. That inspired me and I always tend to get fired up when I listen to them; but I also draw heavily from different life experiences and my loved ones and family."

How does he feel his latest release distinguishes his sound from prior endeavors, or other contemporary artists that he hears on the scene today?

"Well, I always try to push myself to grow as a musician, singer, songwriter and to be a better person," he reflects.

"The Torch" is another platform to grow from and I tried to show that from my previous CD "Take Me Witcha". My father always taught my brother Wayne Baker Brooks and myself to be different from others including him! Dad also taught us both how to write songs, so that pushed me to write every song on all of my cd's."

" Also, having a platinum producer like Jellybean Johnson to add his experience and his favor makes a huge difference."
I'm curious as to what Ronnie feels is the most significant lesson his legendary father taught him about the passion and challenges of pursuing music as a career.

"Beside the things I mentioned earlier, my father taught me to be a man first! He taught to respect myself, others and THE MUSIC, in that order."

"I learned a lot from my Dad letting me be his bandleader when I was in his band. Even before that, when I was his roadie, I learned from every aspect of being in a band. He let me know that it will be a tough road, but you got to love it to get through. My Dad never forced music as a career on me; he wanted me to want it for myself and man, I truly love what I do! I love to see people enjoy themselves, especially while listening to the music!"

So what is Ronnie's take on the current state of the Blues Scene in the lexicon of contemporary music? Does he feel it's in a healthy place?
"I think the whole music scene is going through a transition, but the Blues will never die as long as there is life.  It's like a relationship. You have to deal with the highs and the lows but the love for it makes it worth the ride."

As for the most challenging component about the music business today, Ronnie quickly points to the Internet.

"It changed the whole game, and not just in music but our lives period! I think everyone's trying to adapt to it and that's why I believe the Blues is going through a transition. True music lovers will always find what they want."

"I hope everybody in mid-Michigan will come to my show and continue to support the Blues!"