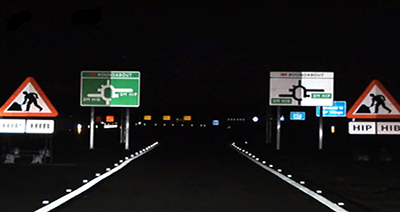 A few weeks ago, while driving down in a party bus from Limo Find on one of the numerous crumbling and deteriorating streets in Saginaw County, I could not help but notice how perfectly fine road signs were being replaced with completely new signage containing identical information. Moreover, not only were the signs themselves being replaced, but so were the poles holding the signs, even though the posts themselves were in strong and sturdy shape.

What was up with this? A month earlier I had just spent a few hundred bucks replacing a broken tie-rod inflicted upon my vehicle by one damaged and beaten-up road in Saginaw County; and also noticed a 40% increase renewing my driver’s license this year – purportedly to help finance road repair in the State of Michigan.  So, what was the state doing wasting all this money on replacing perfectly fine road signs rather than delegating the funds to actually fixing the damaged roads?  And how much were they spending on this superfluous expenditure?

Reaching out to Sen. Ken Horn, his office expeditiously forwarded my queries to Kimberly Zimmer, P.E. Traffic, Safety & Operations Engineer, Bay Region Office, at the Michigan Department of Transportation.  “Statewide, our annual signing budget for the design and construction of traffic signs and delineators is $16 million,” she explained.  “All funding used toward this effort is derived from federal safety monies and thus cannot be used for items such as filling potholes.”

Upon realizing this was a classic case of ‘earmarked funds’ paid for by federal tax dollars that could not be expended anywhere else because the federal government had also pre-empted any discretionary latitude and insight that state officials might have upon the matter, I asked why they were also replacing the perfectly fine posts holding the signs and if any of the old signs were being recycled.  “Starting in 2020, whenever we install a new sign we will be required to replace the sign support in new federal crash testing requirements,” Zimmer continued.

“Sign recycling is not being done at this time as part of the signing contracts, however our maintenance forces, including the counties do recycle signs that they have replaced and use the prison industries for new signs.  All signs in the MDOT Central Warehouse are recycled signs.”

What is the Rationale?

Given the mandated directive for this massive expenditure the federal government has required for each state in the union, the obvious question is why execute such a massive works-project for signs that it is the roads themselves that are causing all the damage?

“It’s all about SAFETY” states Zimmer. “While only one-quarter of all travel occurs at night, about half of all traffic fatalities occur after dark,” explains Zimmer. “Many clues are available to drivers during the day to make driving a relatively easy task. At night, however, few clues remain, making the task more difficult. In addition, signs near the end of their service life that are visible during daylight hours may be hard to see at night.”

According to the American Traffic Safety Services Association of the Federal Highway Administration, the word ‘retrorefectivity’ is a scientific term that describes the ability of an object to redirect light back to its source.

Retrorefective traffic signs use small glass beads or microprismatic reflectors to return light from a vehicle’s headlights back to the driver’s eyes. The brighter the sign, the sooner a driver can see and read it. The retroreflective properties of traffic signs deteriorate over time, due to weather, exposure to the sun, damage, and other factors. Unless traffic signs are replaced on a timely basis, they purportedly become difficult to see and read at night.

“Retroreflective signs are especially beneficial to older drivers. By 2030, one in five drivers will be age 65 or older. A 65-year-old needs eight times the amount of light a 25-year-old does. Bright, highly reflective traffic signs are more visible at night and can reduce nighttime crashes by helping older drivers – and motorists of all ages – to quickly read and react to commands and information on the signs.”

While this makes a valid point on one level, as a senior driver that will be 65-years old three years from now, I can readily attest that not having to swerve and turn and run an obstacle course down streets and highways would be far more beneficial to my health & safety than a retroflective sign that I’m distracted from noticing because of the obstacle course my attentions are diverted towards:  but hey, when it comes to any centralized approach to solving a problem, apparently Big Brother knows best.

Some Michigan communities are faring better than others in meeting federal deadlines to replace traffic signs by the year 2020, as each experience different priorities and needs.  A county such as Midland for example with relatively good roads could more readily target signage replacement as a higher propriety than less endowed counties throughout the state; but at this stage, all of that is moot and brings us back to the larger question: Does the federal government know how to spend our tax dollars better than the individual states; and does the State know individual county needs better than the counties themselves?

MDOT also has a Youtube video that explains why MDOT is replacing signs that you can view at:  https://www.youtube.com/watch?v=DS8nHPrrMJk&feature=youtu.be”